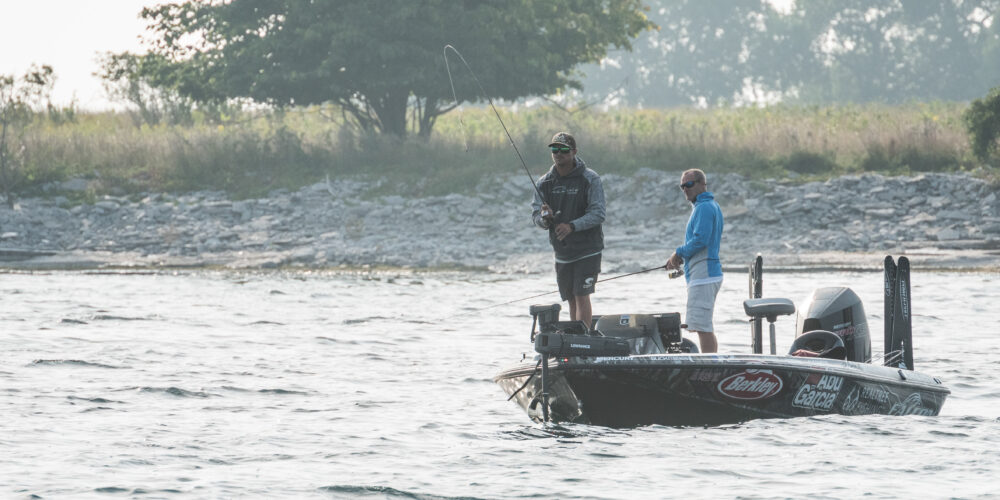 It wasn’t totally unexpected, but so far, a lot of the action in the Toyota Series Presented by A.R.E. Northern Division event on the St. Lawrence River is going down 80 miles or more from takeoff. With Canadian waters and the promised land of Lake Ontario in play, pros are crushing bass and making some extremely long runs.

Day 1 featured stellar weather for the Great Lakes – it was calm and sunny all day. A cold front should make temperatures more comfortable on Day 2, but it might also bring a good bit of wind, which has some anglers worried about their runs. That might let some of the contenders closer to takeoff pick up some slack, because plenty of the 20-pound bags that hit the scale today came from more reasonable runs.

Running to the lake and excelling in the recent B.A.S.S. Elite Series event, former Forrest Wood Cup champion Justin Atkins rolled out to Ontario again and tracked down 23-15 to sit tied for second with Cory Johnston.

“I went to the lake, I really ran the same deal I did for the Elite,” Atkins said. “I found some areas with some rock off the bank that have schools of fish on them. I look for them with ActiveTarget and throw a Flat Worm at them, it’s that simple.”

Catching most of his fish in 15 to 20 feet, Atkins says he caught some as deep as 25 feet today.

A Pickwick local, Atkins knows he needs to win if he’s going to be at the Toyota Series Championship this fall.

“It’s about a 2-hour deal, to get out there and get to fishing,” Atkins said. “It gives you four hours to fish, it’s not a terrible deal. The wind is supposed to blow tomorrow, I hope can get at least two hours of fishing tomorrow, because I don’t know how long it can possibly take to get out there. But, we gotta go, this is the only one the schedule allowed me to fish this year. To make Pickwick, I’ve got to win, so I’m going to the lake.”

The elder half of the terrifyingly good Canadian duo, Cory Johnston mixed the lake and the river on Day 1.

“It was an ok day, it wasn’t spectacular,” Cory Johnston said. “I hit a few spots and saved a few spots. I think I could have weighed more if I hit some other stuff, but we’re trying to save as many fish as we can. I fished in the river for ¾ of the day, and I think I weighed two fish in the lake.”

Catching only 10 or 12 keepers, Cory Johnston says he might not bother with the lake on Day 2.

“I think I’m going to stick a little closer with the forecast tomorrow,” he said. “I have some stuff a lot closer to takeoff where I think I can catch enough to keep me in the hunt, so that’s kinda the game plan tomorrow, but you never know.”

With a mix of shallow and deep in play, the Johnston brothers also have a top-secret advantage.

“I’m catching 90 percent of them on a drop-shot,” Johnston said. “I’ve got a prototype worm that Chris and I are designing that we’ve caught everything on, I’m pretty excited about it.”

A past winner at the 1000 Islands, Matt Becker turned and burned for the lake on Day 1.

“It was one of those perfect Great Lakes smallmouth days, as you can see by the weights,” Becker said. “Today was non-stop catching fish. A lot of small ones, some not even 12-inches, a couple 12-inchers, a 3-pounder, then a 5-pounder. There was a lot of fish catching, I would say I caught 40 bass today – in 3 hours that’s a lot.”

Throwing a drop-shot with a Googan Baits Drag n Drop, Becker started the day with four rods tied up on deck and burned through them all. The best part was that he didn’t really expect to be on them.

“I wasn’t really on them good in the lake, I kinda stumbled into them today honestly,” he said. “I ran all the way down there to fish one spot, and I pulled up and they were gone. It wasn’t blowing too hard, so I started making my rounds and ran into these fish, I didn’t know there were there until today.”

Burning 80 gallons and making a 233-mile round trip, Becker is going to play it by feel on Day 2.

“I had some fish in the Cape Vincent area in the river, I think I might try that if it’s blowing,” he said. “If I get down there and it’s not blowing, I’ll go out. But, I might try and squeak around in the river and then go into the lake and try for a megabag on Saturday.”

Putting up a solid bag on Day 1, Brandon Marks looks just a tick out of place in the top five. Hailing from West Virginia, he’s got Lake Erie experience but had never fished the 1000 Islands before coming up for practice.

“I wanted to get something going up here, I didn’t want to make the long run,” Marks said. “But, when I practiced up here, about 13 pounds was about all I could do. I went out into the lake Sunday, and I had 26 pounds that day. I knew I had to go back down that day.”

Sticking in the Cape Vincent area, Marks started hot and then picked away.

“I had about six spots out there,” he said. “One was a high spot on a hump that was about 23-foot, and right off I caught three – I was actually able to see them on the LiveScope and pitch to them and catch them.”

Tallying only eight keepers on the day, Marks jumped off a few good ones, which was a common theme. Still, if he can keep catching the quality he’s caught so far, there’s no reason he won’t see the weekend.