Vaughan Sets the Pace in Another Champlain Slugfest 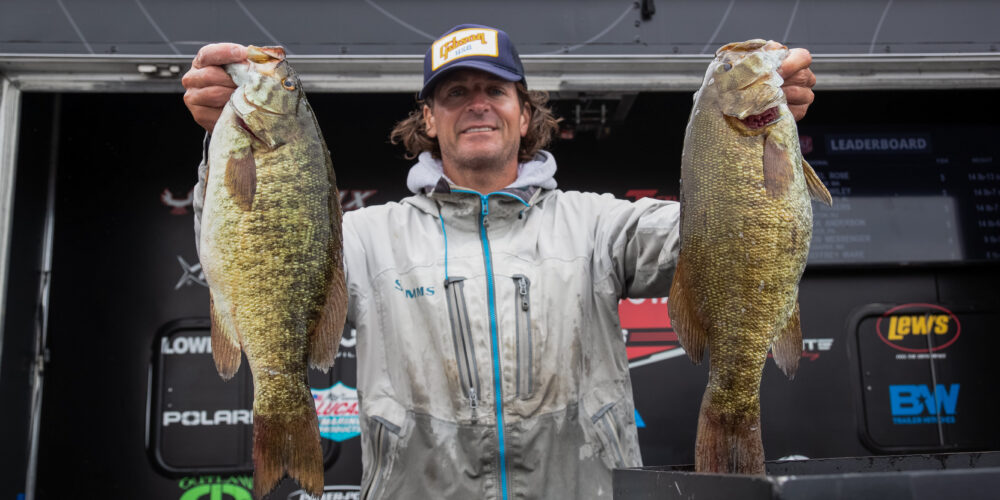 PLATTSBURGH, N.Y. – Day 1 of the Toyota Series Presented by A.R.E. event on Lake Champlain was as good as everyone expected, with 13 pros catching 20 pounds or better and more than 50 pros putting 18 pounds on the scale. Taking the early lead by ounces, Wayne Vaughan tallied 21 pounds, 4 ounces of smallmouth to get things rolling. In second, Spencer Shuffield bagged 21-1, with Bryan Schmitt an ounce behind with an even 21 pounds.

A Virginian in love with smallmouth bass, Vaughan has made a habit of coming north for fun and paydays. In 2019, he won the Toyota Series event at the St. Lawrence, and he made the Top 10 at Champlain the same year.

“It was lucky, it really was,” said Vaughan. “I didn’t catch 21 pounds in practice, I can tell you that. I have no idea. I’m just fishing it as it comes.”

Unlike many of the other pros in and around the Top 10, Vaughan wasn’t committed to chasing bass relating solely to bait.

“I caught most of them 25 foot; drop-shot for pretty much everything,” he said. “A Lot of them I saw, I saw them on [live sonar], but they were sitting on rock. It’s not like I was out in open water finding them.

“The bait balls are out there, but I didn’t see fish on them. It looked to me like the balls were kind of broke up. Not big balls, just pods of them.”

Vaughan reckons the key to the day may have been the overcast and breezy weather, which was a distinct change from practice.

The downside for Vaughan may be the good weather on tap the rest of the way. Sunny skies and calmer winds should be the main feature of Wednesday, which might put him behind the eight ball. Still, counting him out because of the conditions probably isn’t wise, as Vaughan has gotten very good at the smallmouth game over the years.