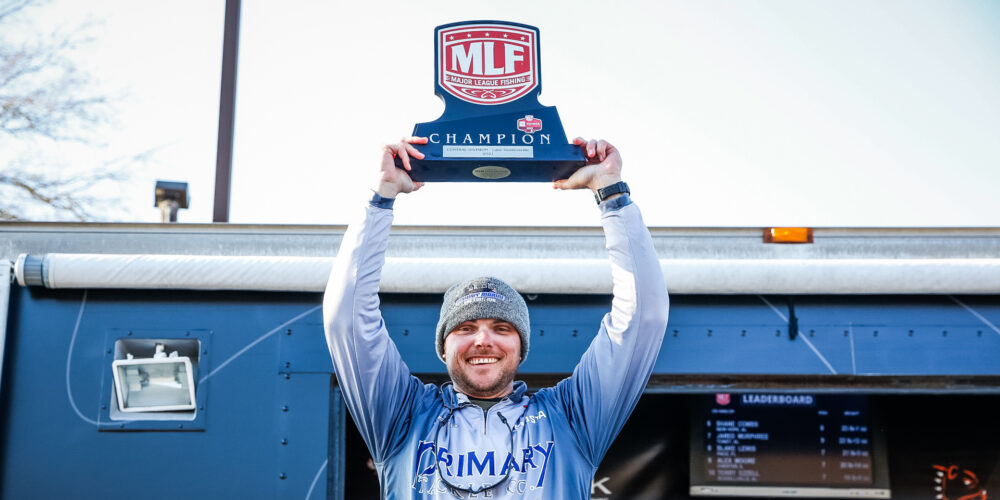 Washam had a limit of about 14 pounds by 10:30 this morning and was culling fish in spite of another frigid morning on Lake Guntersville. The morning began with a 25-degree takeoff and 10 mph northwest wind – a biting 15-degree wind chill factor. Nearly every one of the top ten anglers on the water was wishing for the sun to burn through the clouds (some in hopes of triggering the fish, but others just wanting their hands to warm up).

Looking back on the three-day tournament, Washam says Day 1 was a grind, and he had only had two fish in the livewell at noon. Late in the day, though, “I happened to land on them.

“I went back to an earlier spot I’d fished, and they were just turned on,” he says. “They were just trying to take the [bladed jig] out of my hand. I caught the 7-5 and the 4 [pounder] in the last 10 minutes.”

Thursday was Washam’s smallest bag of the tournament but was big enough to provide him with a 5-plus-pound lead going into the final day.

His pattern throughout the week was a carbon copy of most other anglers in the field.

As the saying goes, the devil is in the details. Those little details are what made the difference for Washam this week.

Yesterday, he actually predicted that more extreme cold might help his bite because he felt it congregated better fish on key areas on the grass flats. It was a good prediction.

“What I was able to dissect this week was that this really cold weather has taken the fish from these vast grass flats and put them in small depressions on those flats,” he explains. “You’ve got a 20-acre area that had bass on it, but this super cold weather has put them in a one-acre depression on that 20-acre flat. That really helped me on Day 1 and today, where I was really able to put my bait in front of fish.”

Washam’s Lowrance electronics and C-MAP chip were critical in locating those isolated depressions.

“I fished some new water today, and before I even showed up, I knew exactly what the contour lines did,” he says. “I knew where there would be hydrilla just by looking at that C-MAP because it’s so accurate.”

Like most pros, you’ll find an array of rods and baits on the front deck, but the one lure Washam depended on most was an Azuma Shaker Z.

“They just really ate it this week,” he says. “It’s got more of a subtle action to it and a good flutter to it. Out of all the lipless crankbaits I tried in practice, it was the one that got the most bites.”

Washam only had two Shaker Zs in the boat Friday, and he had given one to his co-angler. Then, with the camera boat watching, Washam’s line broke on a cast, probably due to ice in the guides, and his Shaker Z went flying.

“I kind of felt bad, but I had to ‘repossess’ my other one back from my co-angler,” he says with a smile.

Three weeks before this tournament Washam lost his title sponsor that could not renew its sponsorship due to strains put on the company by the COVID pandemic.

This first-place finish garnered Washam a $55,650 check. He got emotional as he explained what this win means.

“Losing that sponsor put me in a bad spot; I’m wondering how I’m going to afford to fish this year,” he told the crowd. Then, pausing, barely choking back tears, Washam said, “I don’t mean to get emotional …. It really is an answer from God. I prayed that I wouldn’t doubt Him and I would keep my faith, and this right here is the answer.”

Washam has fished 45 MLF events. This is his second career win along with nine top-10 finishes, amounting to career earnings of $182,197.

This event was hosted by the Marshall County Convention and Visitors Bureau and presented by Googan Baits. The Central Division is presented by Neat Companies.