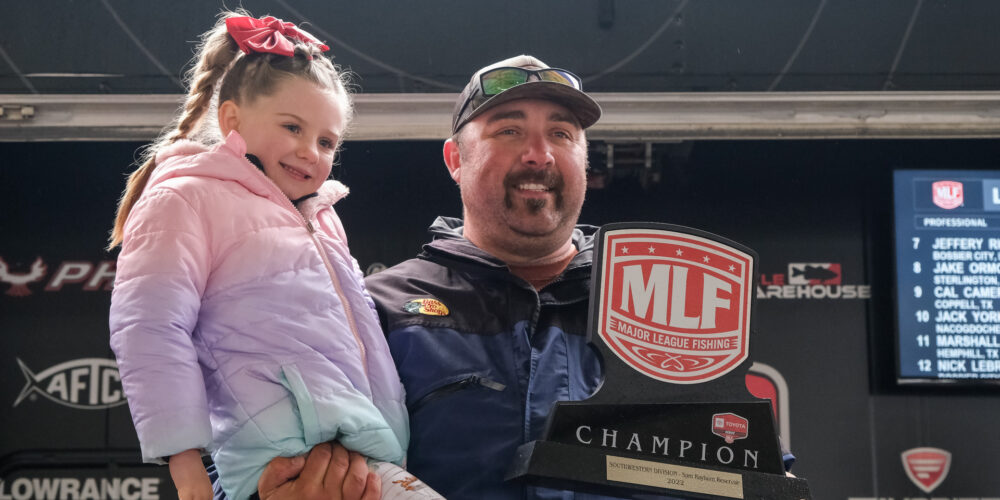 Weighing just four bass for 8 pounds, 8 ounces on the final day, Glen Webb totaled up 63-12 to win the Toyota Series Presented by A.R.E. Southwestern Division Presented by Outlaw Ordnance event on Sam Rayburn. Finishing less than 3 pounds ahead of Derek Mundy and Dakota Ebare, Webb’s huge Day 1 and Day 2 bags carried him through to victory. Worth a payout of $54,000, the win is Webb’s first with MLF and automatically qualifies him for the Toyota Series Championship this fall on Lake Guntersville.

“It feels great man, it feels awesome. It’s the first big tournament I’ve fished on the pro side,” Webb said. “It’s super cool to do it on my first try. I’ve fished a lot of local tournaments back home. This is the first time I’ve really ventured out and did the boater side of anything.”

The first time Toyota Series pro looked comfortable prior to Day 3, knowing that he had a very good chance to win, given his roughly 9-pound lead coming into the final day. Changing weather conditions were a major player leading into the final day, but Webb knew that he was on something special.

The Bethel, Oklahoma pro elected to stick to his game plan to start the final day, doing as he’d done the previous two. Webb got to work on his money stretch of bank featuring stumps, rocks and large nomadic bass. However, he would soon find that the drastically changing weather conditions had this fish in a negative mood and less than willing to commit to the umbrella rig he’d been employing to that point.

“There’s probably more of them there today than there was yesterday. They’re loading up every day. I had two I threw in on that were probably 5 or 6 pounds, just judging by what I’ve seen this week on my LiveScope,” Webb said. “They just didn’t get a hook stuck all the way in them, they pulled off. One or two cranks and they were gone.

“I don’t know if it was the clouds, the wind or the light, but it was off. We tried to make some adjustments,” he said.

Though Web admitted he tried to “force-feed” the umbrella rig, he ended up switching to a Carolina rig to catch his four keepers.

The late-day adjustment paid off as Webb snuck out of Rayburn with a Toyota Series trophy and winner’s check, which wasn’t part of the plan until very recently. But, after finishing well in a local event the week before, he wanted in.

“I wasn’t really planning on fishing this stuff,” said Webb. “I was able to find a link and get in, so I got in here and I’m glad I did.”

Webb knew he was on something special in practice Wednesday, but it wasn’t until after his monster Day 1 bag came through the scales that he decided he better call the support crew in.

“After Day 1, with me leading the deal, my wife decided she better just go ahead and rent a cabin down here. It kind of turned into a family outing,” he said, noting that his two young children also made the trip. “My little girl, she loves coming to these things, and she fishes with me back home. It’s kind of a family deal for us.”

When asked if he plans to continue the rest of the Southwestern Division schedule now that he leads the pack in Angler of the Year points for the division, Webb thinks it’s likely.

“I think I’m going to fish Texoma, because it’s by my house,” Webb stated. “I’ve never fished it, but I know a little bit about the lake.”