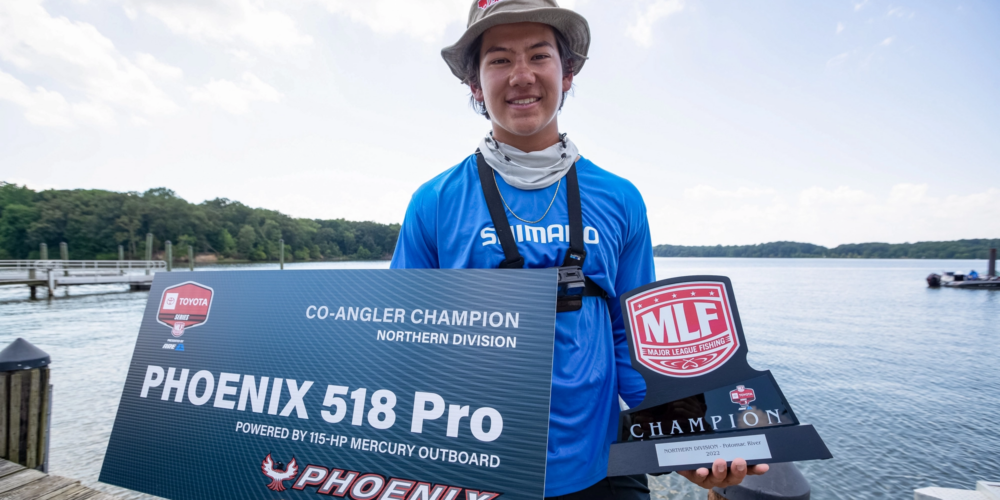 MARBURY, Md. – Being a co-angler has launched quite a few successful careers, including the likes of top pros like Bryan Thrift and Justin Lucas. Maybe Carter Wijangco will be the next?

The 18-year-old is sure well on his way. He finished fifth last year in the standings of the Toyota Series Presented by A.R.E. Northern Division, and after one event this year he’s sitting in first. You know, because he won the first tournament of the season..

Despite launching in fifth place on the final day on the Potomac River, Wijangco caught 13 pounds to edge out veteran co-angler David Williams by 7 ounces with 41 pounds, 7 ounces total.

Until it was finally announced, Wijangco says he felt he’d already sealed his loss

“I was not expecting this,” Wijangco said. “I thought I had blown my chance. They’ve been averaging 15 pounds a day to lead, and I figured I had maybe 10 pounds today. I didn’t think I had enough.”

Turns out, he was lowballing his weight by 3 pounds. While a surprise to Wijangco, he wasn’t complaining about it after.

As for how he got there, the Illinois native who “just likes to fish and learn as much as possible” did so behind the trio of pros Mike Morris, Jon Duarte and Rob Johnson. All three were power fishing in the grass, and Wijangco did a little with a frog and lipless crankbait. However, he’s smart enough to realize there are different ways to catch fish, such as pitching a wacky-rigged Yamamoto Senko (black and blue).

“I would just pitching it to any clumps or holes in the grass while my pros power fished,” Wijangco said. “I just kept catching enough by doing the different thing. All of this is unreal. I’m going to enjoy this for awhile.”