Williams Cracks 20 to Set the Pace on Havasu 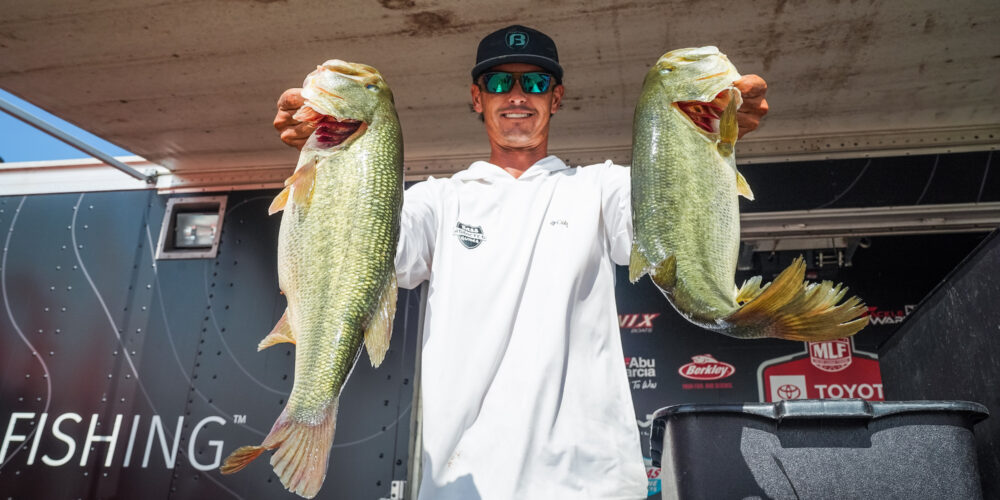 A 20-pound bag on Lake Havasu is not an uncommon thing in the spring. Just look at the 2020 Toyota Series event where a dozen 20-pound bags crossed the stage the first day.

But in the fall? Pros were optimistic, but no one really knew since the Toyota Series had never been here before during this time of year.

Turns out, yeah, the potential is still there, as Mike Williams showed on Day 1 of the Toyota Series Presented by A.R.E. Western Division finale. In a small-but-loaded field, the local pro set himself apart in a big way with 20 pounds, 9 ounces to hold the lead.

Though, even he admits it surprised him.

“That was definitely better than what I expected,” says Williams. “I thought I’d catch them this morning well, and I didn’t get a bite for the first 3 hours. I just kept rotating through the stuff I was fishing. Finally, I pulled up on a spot and caught a 5, 4 and 3 back-to-back to back to save my day.”

He wasn’t the only pro who struggled to get bit, as it seemed almost everyone in the Top 10 only had a handful of bites throughout the day despite gorgeous fishing conditions. Regardless of if a pro was fishing shallow or deep, it just came down to capitalizing when those bites came, and Williams did that better than anyone.

Now, if you couldn’t guess by him rotating spots, Williams is fishing more offshore, hitting man-made structures. He did sample some shallower spots, but he says he wasn’t feeling it. In fact, even offshore, most of his day went solely by feel.

While he admits all that rotating between 15 spots probably frustrated his co-angler thanks to all the long runs he was making each time, it obviously paid off when he hit the timing just right, as once he got a couple flurries, he was done fishing by around 12:30 p.m.

That allowed him to save at least 10 spots or so. The problem is, he admits he still doesn’t really have it dialed in yet.

“I know there are fish in their houses, but I don’t know if they’re just sitting there and won’t eat or if they just show up,” says Williams. “I’d pull up and not get a bite, and then pull up an hour later and have what I had, where they’d just be ripping the rod out of your hand to eat the same bait I showed them an hour ago. Did they just show up or did they just get aggressive? I don’t know.”

Heck, Williams admits he doesn’t even know if the lure he’s using is a factor.

“My co-angler caught four behind me on a bait I didn’t think would work at all,” says Williams. “Obviously I don’t know everything, but I do know the fishing is tough. And I do have a bait I catch bigger fish on this time of the year. I’m pretty much going to glue it in my hand and see what happens.”

Phillip Dutra came into this event with the slimmest of leads. Today, he added a little breathing room. Emphasis on “little.”

Dutra’s 13-14 bag has him sitting in 12th; seven places ahead of Michael Moreno, who was just three points behind starting the event. With Blake Dyer stubbing his toe and bringing in only two fish today, more than likely, the AOY champion will be crowned tomorrow. It’s just a matter of if Dutra can hold on one more day.

One is great, but Jason Akins sure wouldn’t mind a second.

In looking at his fishing career, the Apple Valley, Calif, Strike King co-angler has one win. It just so happens to be a Toyota Series event on Lake Havasu in 2018. Three years later, he’s primed to do it again after catching 14 pounds, 4 ounces to take the Day 1 lead.

“This is my lake,” says Akins. “I love this place. I have a house on it. So it’s fishing tough, but I know how to fish here when it gets like that.”

Fishing behind pro David Ridley, Akins says the two bounced both shallow and deep, catching fish both ways. All told, he got six bites, landed them all, and five were the right-sized keepers.

“It was a total scratchy thing,” says Akins. “I had to scratch behind my pro, and I got a little lucky.”