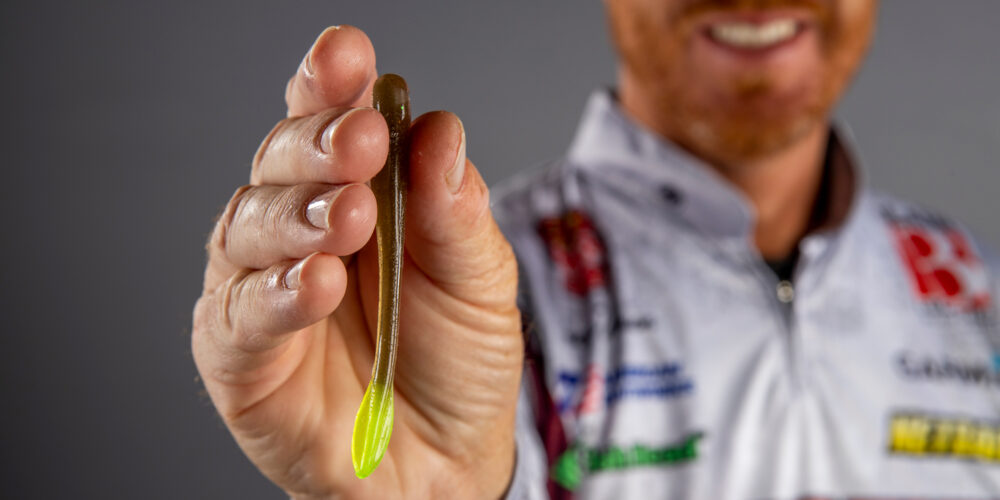 Greg Vinson was able to find, catch and weigh a good amount of smallmouth during Stage Five of the Bass Pro Tour in Sturgeon Bay, Wisconsin thanks to his electronics and choice in bait. The Alabama pro fished a new NetBait STH Finesse Series drop-shot bait called the Crush Worm that netted him more than 64 pounds in two days on the smallmouth-infested waters of Green Bay.

Vinson details five reasons why he reaches for a NetBait STH Finesse Series Crush Worm whenever he is rigging up a drop-shot.

The most important reason that Vinson wants to hammer home is just how soft this bait is. In the NetBait pro’s opinion, you can’t beat the STH Finesse Series

“This bait is so soft because it’s hand poured,” Vinson explained. “What that translates to is that it’s going to have a lot more action on the hook and in the water. The fish are going to study this bait when you drop it in front of their face, and that movement makes a big difference.”

When water temperatures begin to fall, plastic baits can sometimes lose their mojo. According to Vinson, the Crush Worm continues to produce when water cools down.

“The cooler the water is, obviously the harder it’s going to be to get a plastic bait to move,” Vinson said. “That doesn’t happen with this bait. That action stays there even in cooler water, and that’s the advantage of it being hand poured.”

Softer bait means lighter density. Lighter density means this bait is going to float more rather than sinking. Yet another reason Vinson believes a hand-poured drop-shot bait like the Crush Worm has an advantage.

“The bait really suspends and floats as opposed to falling in the water giving it more action,” Vinson detailed. “You don’t need to add a lot of movement to this bait yourself because of the action it has by just floating there. Sometimes even dead-sticking it is enough to get those fish to bite that I find on my Garmin LiveScope.”

It’s not just smallmouth that Vinson catches with the Crush Worm. The variety in colors gives Vinson the opportunity to fish it in clean or dirty water.

“These baits were originally designed for clear-water smallmouth fishing, but I’ve caught plenty of spotted bass near my house in Alabama on them,” Vinson divulged. “There are some darker colors that you can use in dirtier water and they will bite it just as good.”

It’s no secret that smallmouth can put up a big fight, and that’s why a good hookset is important for Vinson. Once again, a softer bait like the Crush Worm is a benefit in hooking fish well, and keeping them hooked.

“A lot of times the fish just mouth a drop-shot and don’t really inhale it,” Vinson mentioned. “That’s not the case with this bait. The softness of the Crush Worm makes these fish gulp it down without even thinking about it. It allows me to set the hook with my Owner Cover Shot hook and have confidence I won’t lose those fish.”