How to Find the Best Docks in Early Fall 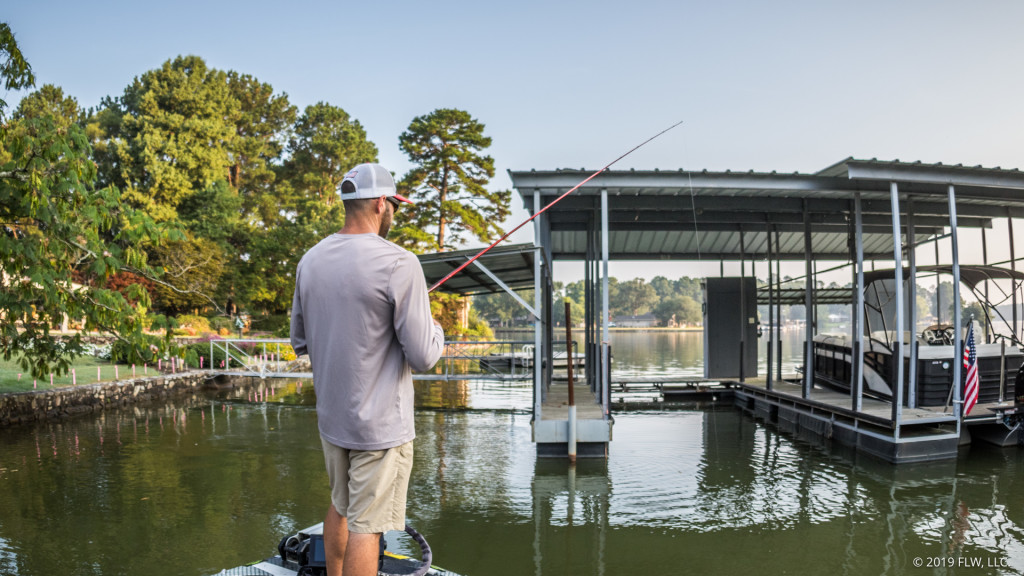 While there’s almost no bad time of year to find a dock pattern, early fall is a prime season for it. The catch is that as shad transition throughout a reservoir in the fall, some bass go on the move with them. So dialing in a key stretch of docks or a dock pattern can at times be challenging, particularly on lakes with a lot of docks.

FLW Tour pro Casey Scanlon, who frequents the dock-riddled Lake of the Ozarks and other reservoirs in the region, leans on a few consistent dock patterns this time of year and knows which types of docks to look for to speed up the search. What works for him on the deep, clear reservoirs near his Lake Ozark, Mo., home might vary slightly from where you live, but the core principles apply in many parts of the country. 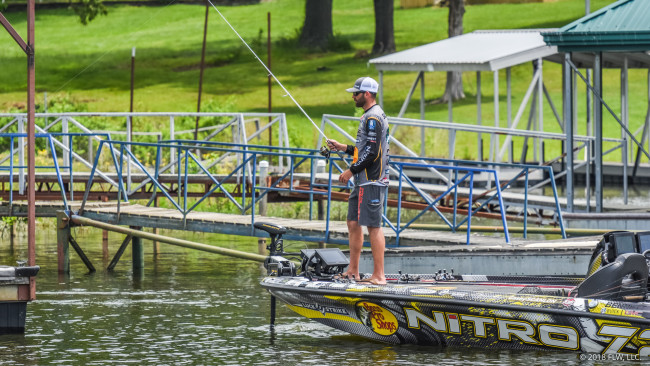 3 keys to finding a “productive place”

According to Scanlon, finding fall dock bass means taking into consideration three groups of bass, which he thinks live on most of his home reservoirs: 1) bass that stay shallow in creeks and bays, 2) bass that live out their lives on the main lake, and 3) migratory bass that move throughout the lake or from deep to shallow.

“I feel like a lot of fisheries have those different groups of fish,” he adds. “Fall is a time of year when there’s fish on the main lake, there’s fish deep and fish shallow. So it can be a hard time of year to home in on where the majority of those fish are hanging out. So I always try a little bit of both [deep and shallow/creeks and main lake], but typically when I’m looking for boat docks, I look for boat docks that are in productive places.”

Scanlon has isolated three keys to finding productive docks, no matter where they are within a fishery.

1. Find shad – The first key is to look for shad, which is pretty typical fall advice on shad-based reservoirs. However, it’s so important that Scanlon says the best areas can change by the day if the bait moves. You have to be willing to relocate with them.

“The more I fish, whether crappie, bass or bluegill, I’ve learned those fish are going to follow the shad around – especially bass and crappie,” Scanlon says. “I’ve noticed it on my dock here at the lake. You go down to the dock, and, it can be zero degrees or 100 degrees, if there’s shad underneath the dock we catch crappie. If there’s no shad underneath there, we don’t catch them.

“It’s the same thing if I go into the back of a creek and fish docks. If we catch them one day and the shad are active, typically if I go back in there and the shad aren’t very active I’m not catching them very good. If the shad have moved maybe two-thirds of the way out of the creek, I can pull over to boat docks that look right in that section of the creek, where I’m seeing the baitfish visibly on the surface or on my graph, and I can try to relocate those fish by fishing docks that are around those areas. So I do find a lot of fish by visibly looking for shad.”

Also, big floating docks usually have more cables and cross bars than smaller floating docks. All that “stuff” under the dock gives bass a lot to relate to. It’s habitat where they can ambush bait.

Scanlon uses his side-viewing and forward-looking sonar to look for cable spools, a mess of cables, cross members and other parts of the dock structure that will attract bass. He’ll also scan for brush piles, which sweeten docks even more.

3. Find isolated docks – “I don’t really want to fish a string of 150 docks to try to find the best dock in that group,” Scanlon says. “I try to find docks that are a little more isolated. It doesn’t matter whether it’s on the main lake or whatever; a dock by itself is better than a string of docks, in my opinion. It’s going to concentrate the fish.” 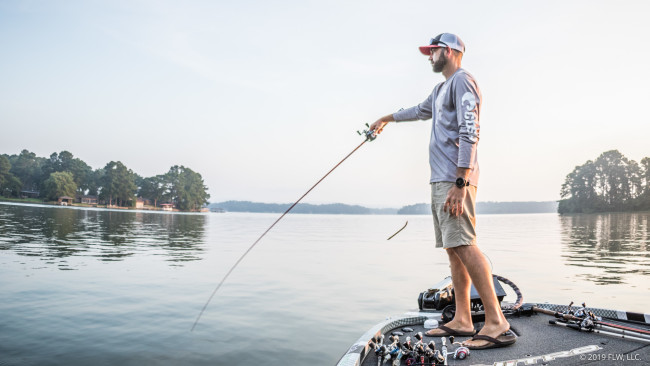 Large creeks with deep creek channels usually hold more bait and more bass than smaller creeks and pockets, so Scanlon spends more time in the larger arms of reservoirs. But he’s not wasting time fishing throughout the entire creek.

He starts by locating docks that fit the three keys described above. But he also likes to search the extremes of creeks.

“To find a productive stretch of boat docks in a creek filled with boat docks, looking in that middle stretch of creek is really time consuming and unproductive,” he says. “The quickest way to find them is to fish the backs of creeks or to find boat docks on or close to the main lake – so the first few boat docks coming into a cove.”

He’ll also pattern docks based on the shoreline terrain and other cover. Points can be good, and so can bluffs. Docks with brush or other wood cover nearby are good targets.

The backs of creeks are particularly attractive. Shad will migrate into the backs, where bass chase them over flats or ambush them around any kind of shallow cover. Sometimes Scanlon has to pull out and try to catch these fish over the flat. But if there are docks nearby, the fish should set up in their shade.

“There’s no depth too shallow in the fall; I can tell you that,” Scanlon adds. “A lot of times when I’m catching them I can see the bottom or I’m kicking up mud with my trolling motor. So usually I’m concentrating on zero to 7 or 8 feet.”

Crankbaits, spinnerbaits and swimbaits are good reaction baits to throw around docks in the creeks. Jigs and Texas rigs work well, too. Scanlon often follows up with weighted wacky rigs (see details below). 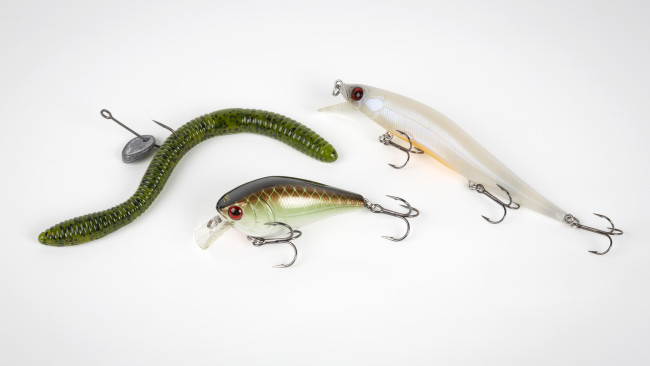 The main-lake pattern is different. These are suspended bass, usually set up over deep water.

He’ll usually start off fishing main-lake docks with reaction baits such as crankbaits, spinnerbaits, swimbaits and jerkbaits that he can work through the water column. Front corners, cables and other structural elements are key targets.

“You’re trying to draw that strike out over open water,” he says. “Usually I like to try to get a reaction strike. You can visibly see the fish come out to get it. A lot of times there’ll be multiple fish swimming with the one that strikes your lure. And then at that point I’ll switch it up and I’ll drop something like the Trophy Bass Company Wacky Weight on them.”

The Wacky Weight is designed to slide over a wacky worm’s hook point and hang in the gap of the hook. The worm goes on next and holds it in place.

Scanlon likes to pair it with a 1/0 or 2/0 Hayabusa straight-shank spinnerbait trailer hook.

“It’s an awesome hook for that,” he says. “That weight just helps the bait fall a little bit faster. I throw it out there on the dock corners, let it fall for eight or 10 seconds, and reel it in and make another pitch. Usually those fish will position on the corners of the docks because that’s where the cables are, and that’s usually where the cross member is that kind of keeps the dock together. Usually those fish get on the fronts of those docks and just kind of wait there for prey to come by.”

What’s really great about this pattern is that bass will group up under productive docks, and it’s possible to catch multiple fish from one structure.

Weather is an important factor to consider with this pattern. Sunshine will push more fish into the shade, so sunny days are great for running docks. Also, Scanlon prefers windblown docks or docks directly in the line of heavy boat wakes. The chop helps his reaction bite.

“I think the deeper the better,” he says. “If they don’t have 50 or 60 feet of water underneath them, a lot of times they’re not nearly as productive, especially for suspended fish. I want pretty deep water. That’s relative to the lake as well.” 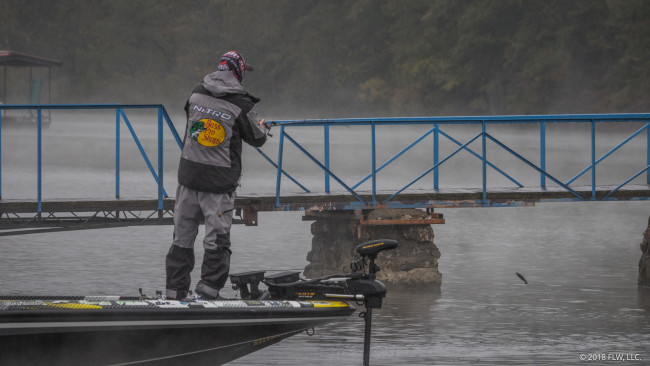 Tossing a Whopper Plopper around the backs of docks and under walkways is classic fall fishing in the Ozarks. Scanlon is dialed on that, too, but he says that usually turns on a little later in the fall.

“When guys talk about fishing the walkway behind the dock, that’s kind of the next step that those fish take,” he says. “So when they’re feeding on shad and things like that, those fish are going to use the front corners much more so than back behind the cables behind the dock. They’re going to ambush from the front corners. In a lot of instances, on shallow docks, there’s no water behind walkways. Some of the docks I’ll be fishing will almost be lying on the land. You could only fish the front because that’s the only water on the dock. In the instances of deeper docks, that [the front] is where the cover is for them. That’s where the cables are. That’s where the cross bar is. And 99.9 percent of the time the fish are going to be on the front of those deeper docks. I don’t even throw a cast to the back of them.”