Cash in on the Florida Prespawn 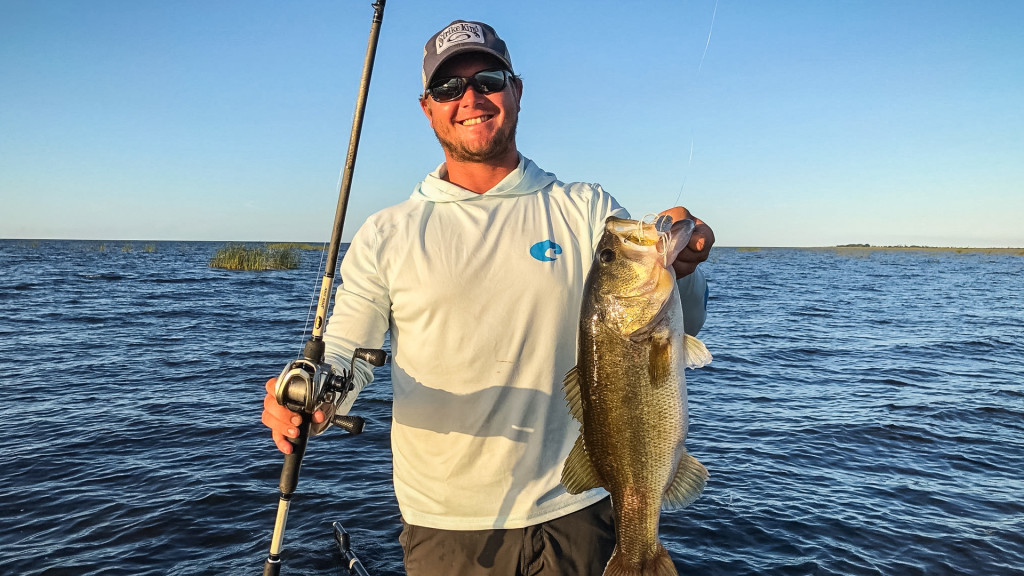 Jared McMillan
How Jared McMillan samples some of the best fishing of the year
November 25, 2019 • Kyle Wood • Major League Lessons

When most people think of fishing in Florida, braided line, flipping sticks and punching mats with heavy tungsten weights come to mind – not to mention the thought of wrestling with a double-digit fish in heavy cover. Though there are certain times of the year that can be the case, the reality is that some of the best times to catch quality and certainly numbers of fish get overlooked by most of the country.

Growing up on Lake Okeechobee, Jared McMillan loves to flip for big fish when the opportunity presents itself, but he’ll be the first to tell you that mid-November can be one of the best times to be on the water.

“One of my favorite times to fish is right now,” says McMillan. “When the water starts to cool off like it is now, they come up in numbers and feed up before the spawn. It’s like prespawn in other parts of the country, except it doesn’t last as long because we have so many waves of fish that spawn from now until April, so it’s just a few weeks of feeding up.”

While this prespawn pattern may be temporarily short-lived, the fact that it happens over and over for months on end throughout the late fall into spring means dialing it in can oftentimes be a matter of watching the weather. As a cold front rolls through and the water temperatures fall, it keys the fish to begin staging to spawn – especially when a full moon is in the cards. From there, identifying where schools of bass are staging becomes to the next piece of the puzzle. 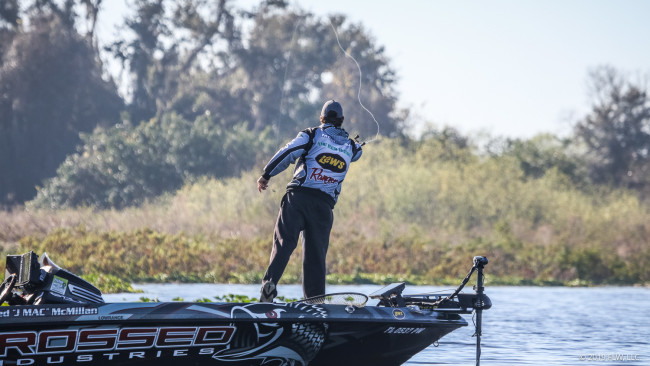 Finding bass on lakes like Okeechobee or Toho may seem like a daunting task to those who have never seen them before, but McMillan says it’s a pretty simple approach to get you in the right area.

“Water color is a huge deal for this,” he adds. “I’d start by running to the outside grass edge and looking for a water color change. A mix of clean and dirty water is where they sit because the bait doesn’t like to stay in clean water because they can be seen, but the bass like the clean water. A lot of times you can visually see the color change when you’re running on plane and sometimes it’s more subtle. The harder the color line the better.

“Another big factor is bait. If you see birds flying in the same area as the color line, that’d be a great place to start fishing. The final thing you want to find is hard bottom. If you have bait and a water color change and can find harder bottom, like shell beds or clean spots, then you have all the right ingredients to catch bass.”

Since most Florida fisheries are relatively shallow, McMillan opts for fishing an area and using his baits to help identify clean spots in the grass or shell beds. If he fishes for a bit and doesn’t catch anything, he’ll move on to find the next promising area.

“Usually, you can find the route they’ll take to spawn and track back to where they’ll stage,” he explains. “So, if you have a bunch of reed clumps or pads where you think fish will spawn, and not too far away you have a water color change, bait and a shell bed. There’ll be fish around there somewhere. It’s kind of like at Rayburn last year how they were stacked in those ditches, but instead of them being in 20 feet of water, those types of areas are in 5 or less. I’ve caught 40 to 60 fish off of one spot before, and you can usually find a few places that have schools. That’s why I love fishing this time of year so much.” 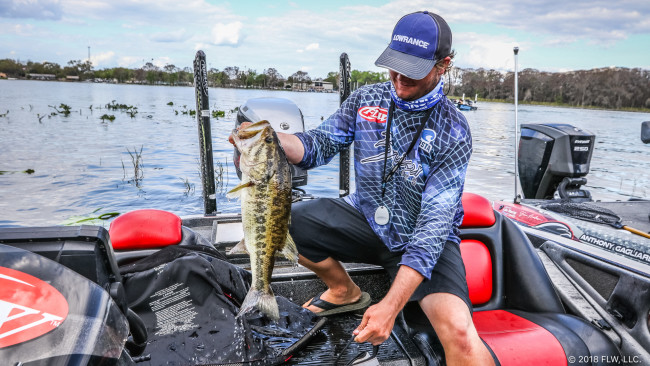 For this situation, finding the bass is half the battle, so baits you can easily cast and retrieve fit the bill perfectly. Over the years of perfecting this approach, McMillan has settled on two baits to rely on in this situation.

“I like either a 1/2-ounce Strike King Red Eye Shad or a 3/8- or 1/2-ounce Strike King Thunder Cricket. It just depends on how much grass there is,” says McMillan. “But I like them both because I can cover water efficiently. If there’s too much grass, I throw the Thunder Cricket, and if there’s less grass, I throw the Red Eye Shad.

“Especially on Okeechobee now there are a lot of dead cattails or reed stalks that are broke off underwater and you can’t see them, but you can feel them when your bait bumps it,” he says. “That kind of stuff holds fish and the Red Eye Shad and Thunder Cricket are great ways to find it and not get hung up too much.”

McMillan adds that a Strike King Sexy Dawg or Popping Perch can also be good choices – especially if the fish come up schooling once you find them, but the Red Eye Shad and Thunder Cricket are baits to never leave home without.

On the business end of the baits, McMillan keeps it pretty simple. For line, he uses 20-pound-test Strike King Tour Grade fluorocarbon for both baits. A 6-foot, 10-inch medium-heavy Lew’s Custom Speed Stick with a 6.4:1 gear ratio reel are the perfect setup for the lipless and a 7-foot, 3-inch medium-heavy Lew’s Custom Pro rod with a 7.5:1 Lew’s Pro TI reel pair nicely with the vibrating jig.

“You’ve got to throw big line and 2X treble hooks for these fish. They’re mean when they come in from the main lake.” 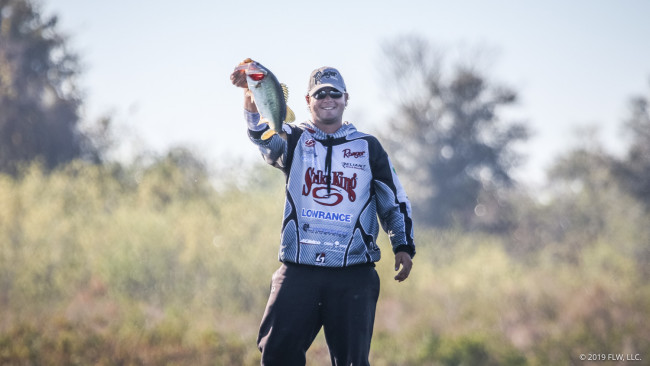 Where there’s one, there’s more

No doubt this is the time of year when you shouldn’t overlook one bite that seemed random at the time. If you don’t catch another one from the same spot after few casts, don’t write it off. You may need to prospect around the neighborhood a little more.

While McMillan admits he’s missed schools in the past by ignoring a bite or two, he’ll tell you from experience to follow those clues and see where it leads, because the motherlode may not be far off.

So, if you’re tired of staring at ice on your lakes or want to enjoy a little warmer weather, there’s no better time than the present to head to Florida and experience some of the best fishing you may encounter all year.