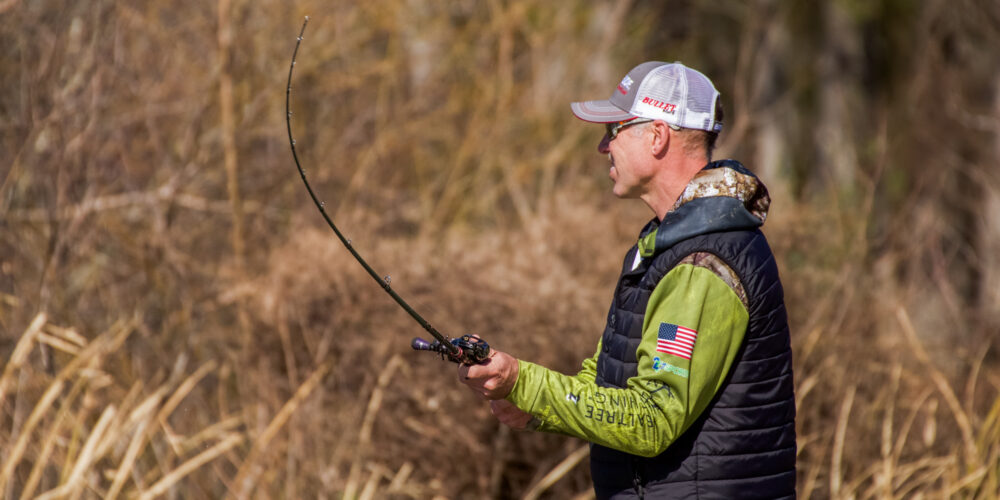 Few anglers know this better than Andy Morgan, whose angling exploits on home waters intersect with a fascinating segment of lure-making history.

The history lesson is a story for another time. But catching bass on flat-sided cast-and-crank creations is a topic Andy Morgan is ready to tackle whenever it’s cold.

“A lot of flat-sided baits began here in east Tennessee on to North Carolina,” says Morgan, who makes his home in Dayton, Tennessee. “We’ve had them for a long time, and they are very effective in certain situations.”

“Certain situations” often boil down to water temperatures trending downward from the low 50s and water clarity on the “stained” to “dirty” side of the scale. Structural conditions matter, too. But the mere mention of flat-sided baits to Morgan brings on a flood of nostalgia.

“Back in the day, when (development of these baits) was really going, you had two types of baits tied on 100 percent of the time in late winter and early spring,” recalls Morgan. “You had a lipless crankbait and you had a flat-sided crankbait. Everyone fishing a tournament in our region had those two on their deck. That’s what you took to battle. And when the bass were on that type of bite, a lot of big stringers were caught!”

Lipless crankbaits are versatile, four-season tools, but they’re especially effective in the cooler months from autumn through winter and early spring.

Morgan’s no-lip of choice is Strike King’s Red Eyed Shad, a lure Morgan lauds for its wobbling action on the fall and, well, for its plain old ability to catch fish.

“I don’t know if anyone has caught more fish on a Red Eyed Shad than me,” he says unabashedly. “Maybe VanDam…but he’d have to have caught a lot on them!”

Morgan lent credence to his claim with a Bass Pro Tour victory in April 2019 on “home water,” Lake Chickamauga in eastern Tennessee.

“I caught a lot of fish there on a Red Eyed Shad,” he recalls.

Lipless crankbaits were forerunners of — and inspiration for — the varieties of flat-sided crankbaits with diving lips so popular today. Though the two styles of baits might be interchangeable, at times, there’s a time and place for each to Andy Morgan.

“In flat water that’s shallow and really flat, where you don’t have much contour, that lipless crankbait is better than anything else by leaps and bounds,” he says. “But when you get to a bank, an edge, a channel swing, a channel-swing bank, or just a drop into a channel, that’s what guys built those flat-sided (lipped) crankbaits for.”

The Angles — and Wiggles — on Flat-Sides

Plenty of flat-sided crankbaits with diving lips have filled tackle shop pegboards over the years, but Andy Morgan’s experience with the baits has been largely limited to the kind of wooden, hand-carved varieties that created the category.

Flat-sided crankbaits evolved as descendants of the original Big O. Like the Big O, they were hand-carved out of balsa, basswood, cedar and other woods. Flat-sides emerged in the company of other crankbait variations as arm-chair craftsmen experimented with shape, size, wood materials and lips to produce subtle difference in vibration, action and running depth. Morgan still relies on original hand-carved flat-sides and their descendants for much of his cranking. For the most part, he prefers to use them in stained or dirty water.

Variations from one flat-side to another revolve largely around wiggle and “castability.”

“With flat-sides, it’s all about the ‘wobble,’” he explains. “Some of the baits we used had a different type of lip on them. Some had a tight wobble, but some with a lip had a wide wobble.”

Conditions are still likely to dictate his —and the fish’s — preference.

“It seems like the dirtier the water, the harder the wobble,” says Morgan. “The wide wobble is better in shallow water, too — 4 feet or less. And it seems bass prefer the wide wobble more in spring. The types of flat-sides with a tighter wiggle we typically use in clearer water, and we work them a little deeper, down to 7 or 8 feet.”

As described earlier, Morgan finds that flat-sides with diving lips are ideally suited to fishing depth and contour transitions.

“In the spring, you’re catching fish with these baits when bass are on the edge before they move on that flatter water to spawn,” he says. “A lot of the time, these are banks tapering at a 45-degree angle. That’s what these baits were designed for — lakes like Fort Loudon and Watts Bar with a lot of gravel and rock and channel swings on the edge of flats. That’s where these baits really shine.”

In MLF competition, the baits have paid off for Morgan in events at Lake Conroe in Texas and the lakes near Raleigh, North Carolina.

“That flat-sided crankbait is a different animal,” Morgan says wistfully. “It’s not your standard crankbait. It’s really not. Why does it outfish other types of crankbaits? I can’t tell you with 100 percent certainty, but I do know one thing.