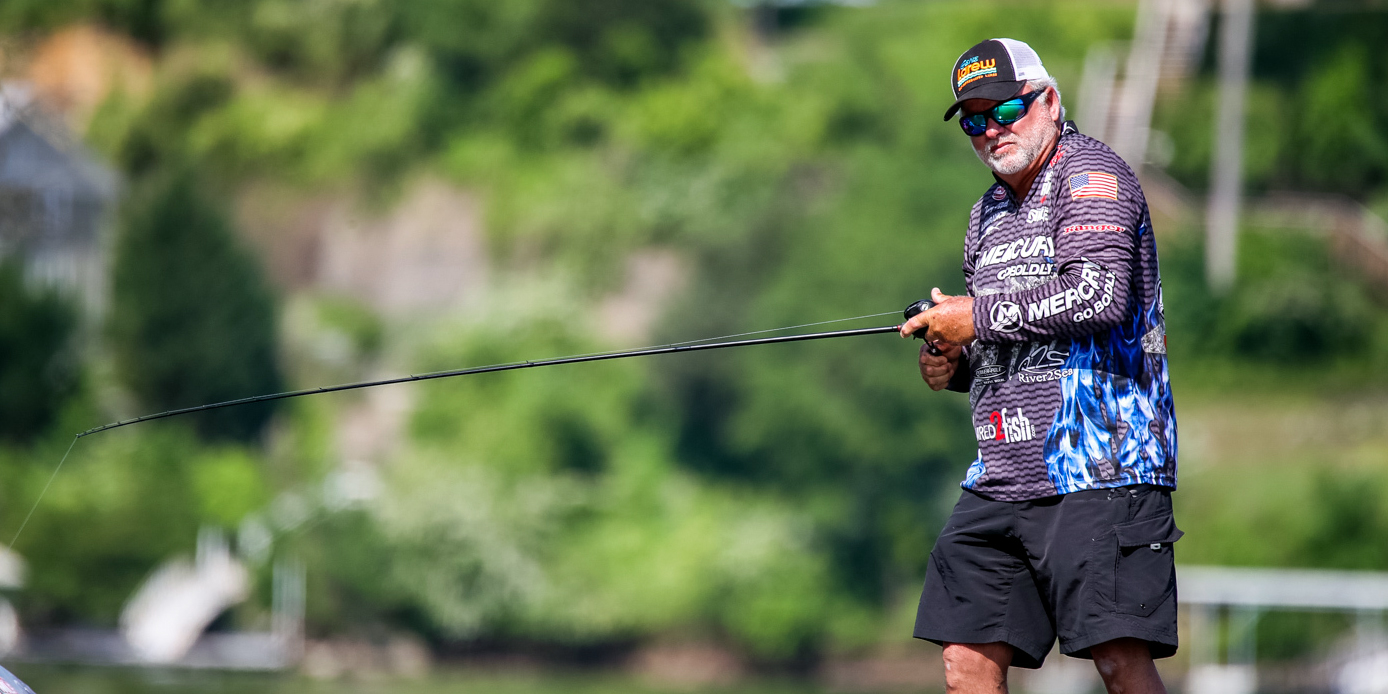 Tommy Biffle shares some wisdom from his three decades of jig know-how. Photo by Josh Gassmann

Few anglers fishing the highest levels of professional bass tournaments are as synonymous with a jig as Oklahoman Tommy Biffle. Sure, many pros have signature series jigs with sponsor companies, but Biffle’s career over the last three decades has been tied to a jig. Literally.

Biffle’s love for jigs started decades ago when he began making his own jigs, and it’s stuck with him through a 33-year career that includes just shy of $3.1 million in winnings.

“I feel the best thing you can do in a tournament is fish your strengths,” Biffle says. “When I first started bass fishing, I learned how to fish with jigs. I poured my own and tied my own with a neighbor, and I’ve stuck with it. Whether it’s flipping, pitching or casting, they work, and you’re going catch some big ones. One guy I knew told me years ago, ‘They’re gonna stop biting that jig,’ but they haven’t stopped yet.”

Biffle acknowledges that the majority of anglers stick with a handful of tried-and-true colors – nothing wrong with those colors, Biffle says, but in most cases, his jigs will have some other color variation.

“At seminars, I always ask the attendees if black and blue is their favorite color, and almost everyone says yes,” he says. “I tell them ‘I don’t want to use it, especially on lakes you fish.’ I mean, it’s a good color, but not if everybody is using it. Then, I ask how many have black and yellow. None raise their hands.

“I tie my jigs black and yellow, with six or seven strands of light yellow. I always thought it looked like the underside of crawdad. You’ll always find (that color) in my boat. If I could just have one jig, that’s it. It’s a muddy water color, and a lot of the lakes here in Oklahoma where I learned to fish have muddy water.”

Why the HardHead and Biffle Bug?

Biffle’s love for the HardHead and Biffle Bug developed years later, but his devotion to that combo is just as strong as the black-and-yellow flipping jig.

“When I first started fishing the HardHead, I thought it was only for rocky bottom cover since it’s a football shape, but I ended up winning tournaments all over with it,” he said. “Whether it’s rocky bottoms or through scattered vegetations, it’s like fishing a rattle bait. Plus, the HardHead has a free-swinging single hook. When you hook them, they stay on better than a crankbait, but you can still cover a lot of water quickly, like when you’re using a crankbait.”

Biffle uses a flipping stick for both the jig and the HardHead. His reels are loaded with 25-pound Sunline Shooter for the flipping jig, and occasionally 30-pound Shooter, if he’s fishing big-bass water. For the HardHead, it’s a 20-pound Shooter.

Biffle keeps it simple for sizes of both the flipping jig and HardHead as well.

“The flipping jig size I use the most is a 1/2 ounce in bushes, willows or trees,” he says. “In laydowns or around stumps, I stick with a 3/8-ounce jig. It’s easier to crawl around roots and cover. My HardHead choices vary based on the depth I’m fishing. I use the 7/16 ounce the most fishing from 5 to 7 or 8 feet of water. If it’s real shallow, I’ll throw the 5/16 ounce. Though sometimes I’ll throw a heavier one just to make more racket. Up north, fishing deeper for smallmouth, I’ll use a 1-ounce model.”

Biffle varies his jig trailers according to the size of the fish in the lake he’s fishing.

“If (the lake I’m fishing) doesn’t have much big fish, I’ll use a little twin tail or a Super Chunk Junior,” he says. “But if it’s a lake with big bass, I use an old Gene Larew Mega Craw. Besides yellow and black, I’ll switch to green pumpkin with some green flake in clearer water, or a drab olive if the water is clear like drinking water.”

Biffle’s choice for Bug colors range from his favorite, Sooner Run, to black neon, watermelon/green pepper, blackberry, and green pumpkin with chartreuse on the bottom.

Getting the Best Hookset

A proper hookset with the HardHead will make all the difference in how many bass you hook while using that jig.

“When I first started using the HardHead and Biffle Bug, I was using a 6-foot, 10-inch jig rod,” Biffle says. “I was fishing the Alabama River and just couldn’t seem to catch up to the bass on the hookset. I switched to a 7-foot 6-inch flipping rod and that made all the difference. It took up more line and you can really control the bass.

“The hookset is really easy. You rig the Bug weedless, with the hook all the way through laying on the back of the bait. You make your hookset to the side, in the 2 or 3 o’clock position. You don’t pull straight up. That rod and that hookset work very well. Just like fishing with jigs in general does. They’ve worked for me for my entire career. I had an old fella tell me years ago, dance with the one that brung ya. I never forgot that advice.”

EDWIN EVERS: Lessons Are Where You Find Them

Ask the Anglers Presented by Champion: Which MLF Pro is Your Favorite to Follow on Social Media?

OTT DEFOE: How I Catch ‘Em During the Fall Drawdowns in East Tennessee

Brett Hite: Next Level with the Bladed Jig