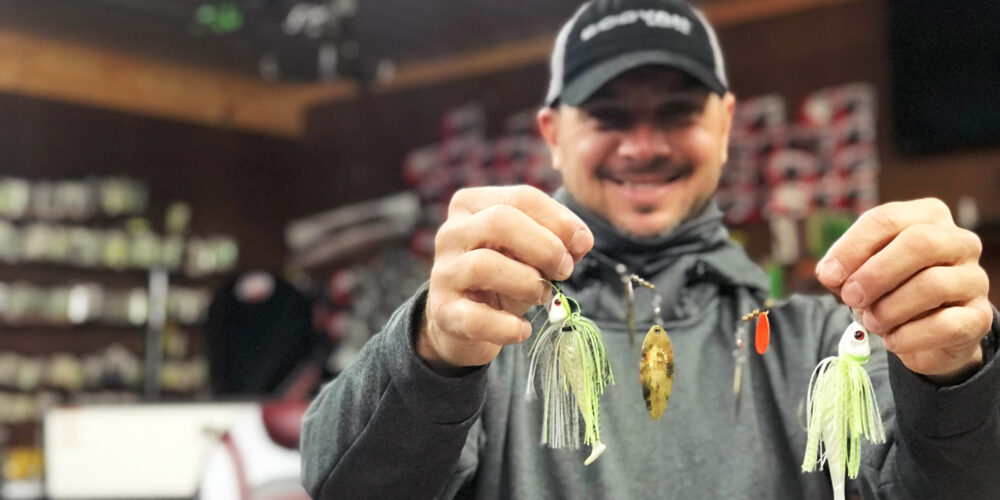 MLF pro Jason Christie will be the first to admit that he loves to attack shallow water with power-fishing techniques. One of his biggest weapons is the spinnerbait, and he feels that it’s one of the best ways to catch big fish during the winter, if the conditions are right.

Christie’s thoughts on the importance of winter water temperature have changed over the years.

“I used to think water temperature was the most important thing, but now I believe water clarity has more of an impact, especially when talking spinnerbaits,” he said. “You do need some off-colored or muddy water for spinnerbaits to be at their best. If the water is clear, something like a jerkbait is going to be a better choice.”

As he discussed his theory, Christie mentioned a day on the water this week around his home in Oklahoma.

“I was catching fish shallow as a foot of water when the water temperature was 47 degrees, but the water was dirty,” he said. “You might not get a bunch of bites fishing this way, but the ones that you get will be quality.”

So what if you’re fishing a clear body of water during the winter?

“If someone lives at a place like Table Rock Lake, I always tell them to run up the creeks and look for some dirtier water,” Christie advises.

He also has some thoughts on why bass move shallow during the winter, even in cold temperatures.

“If the water is stained or muddy, I believe that forces them shallow to look for food because it’s easier for them to find it than in deeper water or out on ledges,” Christie said. “Fish are also going to be tight to cover, a rock or tree, or whatever because it provides them a sense of protection.

“It’s like if someone turned off the lights, you are going to start reaching for a chair, a wall, or something to hold onto. I think bass are the same way, and it makes them feel more comfortable to have their backs against something when they can’t see as well.”

Keeping this in mind, Christie advises that he’s always trying to get as close to the object as he can with his spinnerbaits when fishing cold, dirty water.

One of the great things about a spinnerbait is you can simply cast and retrieve and catch a bass, but Christie imparts some additional action every cast.

“I’ll pop my rod or slow it down to get the action to change during the retrieve,” he said, adding that he uses a simple countdown to gauge where he is in the water column. “Another key is to keep it close to the bottom, but not on the bottom. I’ll kill it and let it fall to the bottom while counting. You want to track it right along the bottom.”

Spinnerbaits come in a wide range of different blade arrangements with multiple combinations of sizes, styles, and colors. Christie said that he’s asked about this often and stated that it merely comes down to the conditions. His signature series of spinnerbaits, the BOOYAH Covert series, features an extensive array of blade combinations that he has personally selected.

“If it is slick calm, the tandem blades seem to do the best,” Christie says. “If it’s windy, you might need a big thumping blade or two big blades to get their attention. Sometimes, you need to try a few different ones and see what looks good in the water. I am always experimenting with different baits until I find what’s working.”