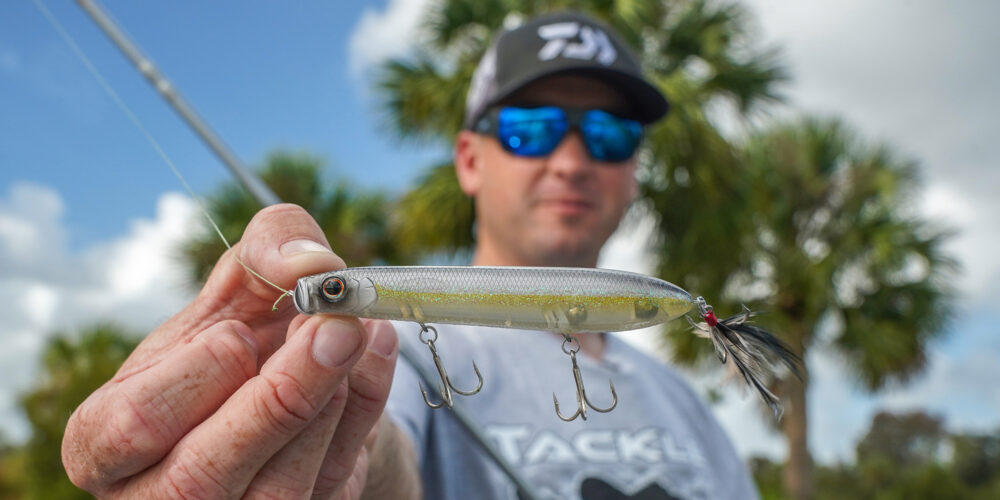 Fishing a topwater bait is among the most exciting ways to catch bass, and part of summertime tradition for anglers everywhere. Topwaters are as ingrained into summer as Fourth of July fireworks, baseball, and family vacations, but they can also be used with great success much deeper into the calendar if conditions line up.

Idaho pro Cody Meyer continues throwing topwater baits well into November and even December under the right conditions, and believes a topwater approach can up the odds of catching big late-season bass.

Meyer recalled an eye-opening experience years back when fishing the 2008 FLW Toyota Series Championship on Table Rock Lake in November.

“That was a long time ago, but I remember Greg Bohannan finished second by fishing a buzzbait while it was cold and snowing,” Meyer says. “That opened my eyes to fishing topwaters later in the year because conventional thinking is that it has to be a summer thing and the water has to be warm. But that’s not always the case.”

According to Meyer, knowing when to pick up the topwater late in the year comes down to the conditions and how the fish are acting.

“It’s dependent on the lake and region, of course, but if the fish are shallow, they’ll eat a topwater late into the year,” Meyer observes. “The one thing you generally have to keep in mind is to downsize your bait some, since the baitfish are generally smaller and the biggest key is to look for active fish schooling and piled up around baitfish. That’s where topwaters shine.”

One of the most significant differences in Meyer’s approach from summer to late-fall topwater fishing is location.

“Compared to summer where the bass are generally in the main lake, I like to work back into pockets later in the year,” he says. “As shad start to die-off, they’ll get shallow will be on the backs of creeks, bays, and little pockets.”

As the water cools and baitfish begin to die off, Meyer will keep a topwater in his arsenal as long as fish are biting it.

“The cutoff is usually when the water starts to dip down into the mid-50s, but I’ve caught big spotted bass on wake baits when the water is in the upper 40s,” he adds. “You’re going to have smaller windows for when the fish will eat on top the later it gets into the year, but it’s a great way to get into some really big bass.”

When it comes to late-season topwater, Meyer relies on walking baits, buzzbaits, and poppers for most situations.

For his walking baits, Meyer likes to fish them on 40-pound Daiwa J-Braid with a short leader of 16- to 20-pound fluorocarbon.

“Using an 18 inch or less leader of fluorocarbon allows you to work the bait efficiently and you won’t foul the treble hooks as much with your braid,” Meyer adds.

He prefers a Daiwa Tatula SV reel in the 7.1:1 gear ratio for all of his topwater baits and throws the Shower Blow on a 7-foot, 3-inch Daiwa Tatula Elite Brent Ehrler “Mult-Purpose” rod and opts for the 7-0 Daiwa Tatula Elite Takahiro Omori cranking rod in the same series for poppers and wake baits.