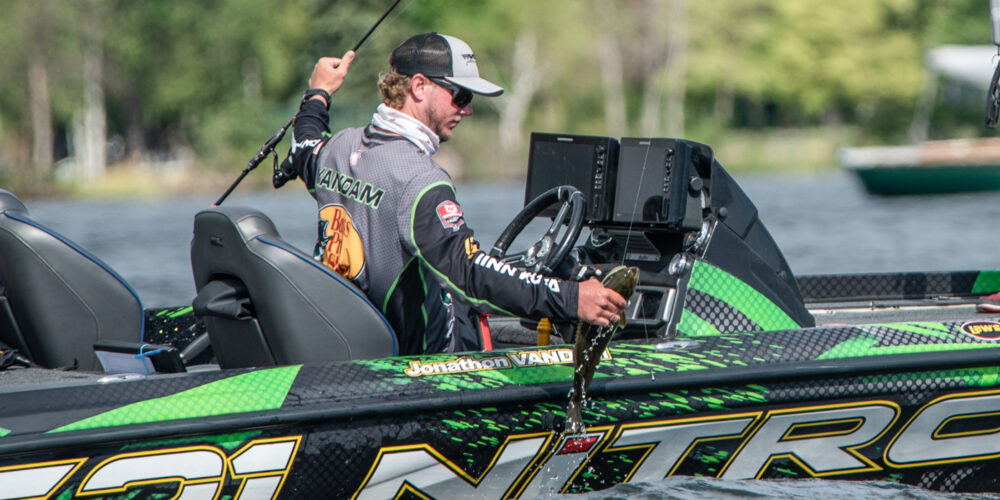 Days grow short and water temperatures plummet in the northern part of the country during the waning days of autumn. For most anglers in the Upper Midwest, the countdown to spring has already begun.

But not for Jonathon VanDam.

“This can be the best time of the year on the Great Lakes,” says the MLF pro from Kalamazoo, Michigan. “Obviously, weather can be a factor, but normally the smallmouth are grouped up in the late season, and, if you can get on them, you can catch a lot.”

Great Lakes smallmouth are well known for their fighting fury and football-shaped bodies. One look at these thick-bodied, muscular fish, and one truth is instantly apparent — these fish love to eat! Water temperatures decline more slowly on the deep, sprawling waters of the Great Lakes. That extends feeding opportunity for these voracious fish, and fishing opportunity for the late-season angler as well.

The fall feed commences when water temperatures dip into the low 50s, and it will continue right up to freeze-up.

“These fish know the hard top is coming soon,” says VanDam. “They need to feed up before winter.”

The progression begins in typical feeding areas — the edges of shoals or shallow areas with rock or isolated piles of bigger rock. “The key is to have bait in the area,” notes VanDam who often targets smallmouth in this early autumn period with spinnerbaits and swimbaits.

“People don’t realize how much current runs through the Great Lakes,” VanDam advises. “The fish may be in deeper holes out of the current, just outside their feeding zones. They will have just dropped off the edges where it starts to flatten out. It may be 25 or even 35 feet deep depending on where you are on the Great Lakes.”

Gobies are an easy target for Great Lakes smallmouth for most of the season, but they play a side dish role as the season advances.

Locating these baitfish clouds in such areas as the mouth of the Detroit River and north shore of Lake Erie, and shallow shoals at the mouths of inlets has led him to tournament success.

“The great thing about these fish is that they are sight feeders,” he says. “You don’t need that crankbait to be near the bottom. You just want to keep it moving kind of fast to get a reaction bite. But you still need to match the hatch (to the type of forage they are feeding on).”

Crankbaits: His crankbait choice varies with the depth, clarity and forage preference. Often baits working the 12- to 15-foot range are most productive. Color and size factor into his “match-the-hatch” assessment. Crankbaits like the Strike King Series 5 or Strike King Pro Model 5XD get frequent use.

Blade baits: These weighted slabs of metal have proven deadly tools on winter bass from Tennessee to the Canadian border.

“Blade baits are really good worked in winter holes from late fall to early spring,” VanDam says. “For quantity of bites, it often seems to be the best option.” He cites Damiki’s blade bait and the River2Sea Glassy Vibe, a lead-bodied bait encased in hard plastic, as his favorites.

Swimbaits: VanDam mixes swimbaits with his crankbaits when smallmouth are hitting moving baits. Round ball jigs in 3/8- and 1/2-ounce sizes do the lion’s share of the work as he slow-rolls deep holes. He prefers short shank hooks to accommodate the generally smaller 2.4- to 3.5-inch swimbaits Great Lakes smallmouth seem to prefer.

He designed the JVD Special for Favorite Fishing’s Jackhammer rod series with smaller swimsuit presentation in mind. The 7-6 medium power spinning rod with parabolic action is scheduled for spring release.

“A swimbait gives the fish a different look,” says VanDam, who ranks the Googan Baits Saucy Swimmer among his favorites. “It’s a good variation to show them when they don’t commit to the crankbait during this feeding stage of late fall. If they don’t respond to one, they often do to the other.”