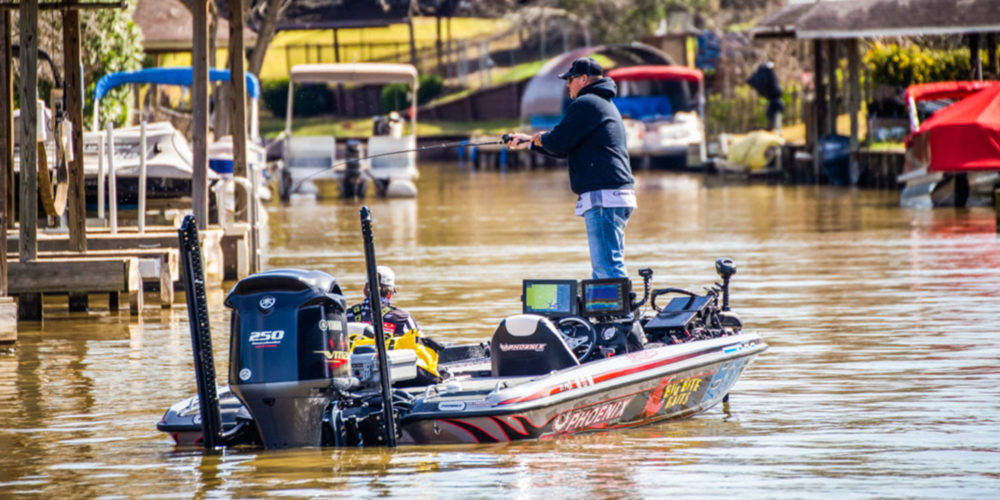 MLF pro Russ Lane has some key advice for anglers looking for the biggest fish of the year around the spring spawn. Photo by Phoenix Moore
March 21, 2019 • Dave Landahl • Major League Lessons

With a nickname like “Big Daddy”, it should come as no surprise that Major League Fishing pro Russ Lane always wants to catch big fish, and springtime is a prime time to catch big bass as they move shallow for the spawn.

The perfect storm of rising water temperatures and the approaching spawn is when Lane gets out his big-fish arsenal, which is surprisingly simple, and something every bass angler should try out.

When water temperatures start to rise and the sun is out longer, bass begin to feel the tug to move shallower, feed up, and start prepping to make baby bass. This is the prime time to catch some of the fattest bass in favorite local hot spot.

“The first movement towards the shallows during this period is made up of male bass,” Lane says. “The males leave the winter areas and sometimes get right up in the spawning areas, but the females, especially the bigger ones, stay back.

“When the water temperatures are anywhere from 55 to 57 degrees, and the water has that classic, slightly murky look from spring rain, a lot of anglers fish the banks. For big fish, I suggest fishing the secondary points (instead). By that, I mean the last point on the way into a spawning area. Usually depths are around 7-to 10-feet deep, but that depends on where you’re fishing.

Lane starts his search with a crankbait, but will switch to a swimbait to slow roll along the bottom in his hunt for big bass.

“I throw the Spro Fat Papa 70 crankbait,” Land says. “It dives to 14 feet, but I use heavier line – usually 16-pound Sunline Shooter – so it won’t dive as deep. It’s a pretty big bait with a wide wobble, and it’s great for bigger fish. I’ll also throw a Big Bite BB Kicker swimbait.”

Take the time to check out the shallows and locate spawning areas, then back away and fish a little deeper for the biggest fish in your pond.

“When the weather becomes stable and the water temperature is around 62 degrees, it’s spawning time,” Lane says. “When you see pollen on the water and you’ve had stable weather, you’ll see bass up shallow on the beds. The biggest bass are generally spawning in a little deeper water. You can go around and slowly creep about looking for them, or do like I prefer to do: throw a search bait so they’ll follow. I’ll throw the swimbait around and when a big one chases or rolls on it, I’ll mark where it happened, and then I’ll peel off and come back in about 10 minutes.”

Lane’s follow-up is a slower presentation, and he gears up accordingly when he’s targeting what he knows will be big fish.

“When I return, I’ll throw a 6-inch Big Bite Trick Stick on a 5/0 EWG Superline Gamakatsu hook tied to 20-pound Sunline Shooter line,” he says. “I use a 7-foot-2 Denali rod to get plenty of power and leverage on the fish when I set the hook. I like the bigger bait here because you need to stay back pretty far and make long casts for this to work.”

During the early part of post-spawn, you’ll find bass in similar locations to the pre-spawn, but there is a twist if docks are available.

“If there’s not vertical cover available, you can find the bass on the secondary point again, but if you do have vertical cover like docks and standing timber, you’ll want to look for the bigger females there,” Lane advises. “You’ll find a mix of sizes then. Some really big females will slide out to the vertical cover and suspend there for up to two weeks.

One more item about gear that Lane suggests you take with you on your spring big-fish hunt: “Use what you have confidence in,” he says. “I use the lures I recommend because I’m confident when fishing with them. Same with my line, hooks, rods, etc. Confidence in your bait and gear is important to your success.”