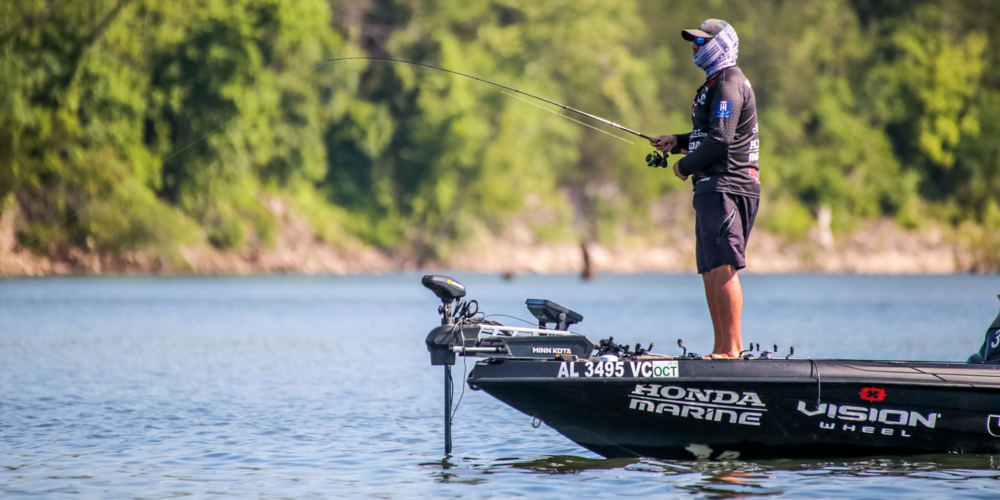 In a recent MLF “Ask the Anglers” video, Bass Pro Tour pros were asked which lure they have used to catch the most bass in their careers. Not surprisingly, the shaky head was a popular choice. It works and gets bites in a variety of situations.

One pro that says he has one rigged on his boat at all times is Alabama’s Jesse Wiggins.

“I always have one on my deck, literally anywhere I go and any time of the year,” he said.

This is a testament to both his confidence in the rig and how versatile it is.

“The only time I have found where it doesn’t work is when the water a dirty ‘chocolate milk’ color,” Wiggins said. “That or on some lakes in the South during the middle of the day in the summer when the bass suspended, other than that, it works everywhere, and I always reach for it when I need to get a bite.”

A Power Approach to a Finesse Technique

Considering the lightweight jigheads used and the fact that spinning tackle is the standard, it would make sense to classify the shaky head as a finesse tactic. But, the way Wiggins approaches it is with a power-fishing mindset.

“I fish it on 30-pound braid with a 12-pound fluorocarbon leader and use a medium-heavy spinning rod. You need to set the hook hard with it to get through the worm; it is not just reeling into them like drop-shot fishing,” he said.

His rods of choice are both from St. Croix, a 7-foot Legend Elite, or a 7-3 Mojo Bass Power Shake rod that he helped design. His line choice is the Seaguar Smackdown braid paired with Seaguar AbrazX fluorocarbon as his leader.

It’s All About the Fall

Wiggins says that many of his bites occur as the bait is falling, or shortly after it reaches the bottom.

“The fish see it falling, and you get a bunch of bites right when it falls or within a few pulls of the rod,” he said, sharing that this is the reason he prefers a jighead with a collared bait keeper instead of the screw style. “The collar to keep the bait secure and puts a little bend in the worm when you rig it and that gives it a spiraling action as it is falling. The screw style rigs the worm straight and will still catch fish, but they just sled down.”

In most instances, he opts for a 3/16-ounce jighead but will change to a bigger hook at anywhere from a 3/8- to 3/4-ounce when fishing a bigger worm offshore, such as on the ledges of the Tennessee River or around brushpiles in big bass locales in Texas.

He will use either a 5.8 or 6.8 Jackall Flick Shake worm and keeps it simple when it comes to color selection.

“Color doesn’t matter, as long as it is Green Pumpkin,” Wiggins quipped.

While many bites occur as it is falling, Wiggins shared that he will still work the bait more thoroughly if he is around cover.

“If I’m fishing it around something on the bottom, I am going to work it back to me and make sure I fish it all,” Wiggins said. “The biggest key anytime you are fishing a shaky head is to try to shake the tail of the worm and not just the jighead. I do this by shaking it on a slackline, and that lets the worm wiggle while the jighead stays in the same place.”

Another prime time to throw a shaky head, according to Wiggins, is when faced with docks and overhanging cover.

“A shaky head with a 1/8-ounce head is one of the best skipping baits out there,” he said. “I also like that lighter head when fishing shallow water because a lot of times, the slower the fall, the better.”