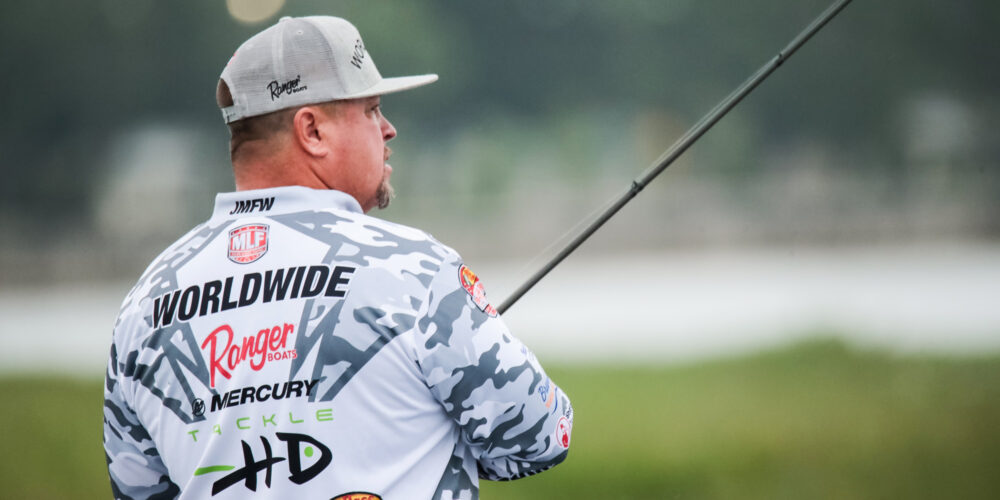 For James Watson, one of the most telling signs of fall is the sight of shad moving into the backs of coves.

Drawdowns in fall are not generally dramatic on Watson’s home waters in the Ozarks. Some years, the drops in water levels are to create capacity for spring rains.

“But drawdown or not, the fall migration of gizzard shad and threadfin balled up in pods in the backs of pockets is a sign that the bank bite is getting stronger,” says the MLF pro from Lampe, Missouri.

Bass wage a two-stage baitfish assault in early fall on highland reservoirs like Table Rock, Lake of the Ozarks, and Bull Shoals.

“Bass join in wolf packs early in fall to feed on bluegill,” Watson says. “Bluegill will bed up to three times a year in my area. I believe bass wolf pack in late summer because of the bluegill beds. They will get up on the bank in group sizes of three to 30 and ravage what they can.”

But it’s the second wave assault as shad file into the backs of pockets and coves that pretty much defines the season for Watson. The sight of oversized gizzard shad, some as large as 12 to 18 inches in length, is downright exhilarating.

“When you hit your trolling motor as you run along the bank and you spook five or six big ‘grizzlies,’ which is my name for giant gizzard shad, those are the days guys like me who love topwater look for,” says Watson. “That skittish movement of big shad is a sign I need to see. When I do, I know I’m fixing to catch them.”

Locating shad is the first order of business. Find the shad – whether by sight or electronics – and the bass will be there, too.

Shad activity in creek arms and pockets increases as temperatures drop into the 60s and 50s. Shad presence draws bass.

“You have to break down the creek arm to learn where the shad are,” Watson says. “Do I have to fish the whole pocket, or are they halfway back? Sometimes you start in the middle of the creek. Sometimes you have to cover it all to find out. As the water cools, it becomes a little easier to target their location. But early in the fall, you may have to run the whole bank from the front all the way back to get the bite.”

The obvious signs are big balls of threadfin shad and other shad pods in the pockets.

“Keep your eyes open to opportunity,” he advises. “You will see a ‘push,’ bass in the middle of a pod, pushing the school around.”

Two factors in particular influence the movement of bait and bass. Wind is one. A slick calm day is not nearly as good as a day with a little ripple or chop.

The other is water temperature.

“Nothing I hate more, especially early in the fall when the bass are starting to migrate, is a rise in water temperature,” says Watson. “Later in the fall or in the winter, a warmer day doesn’t hurt a thing, but in early fall, a blast of nice warm weather just messes the bite.”

Watson fishes his toads and buzzbaits similarly. He calls the Worldwide Buzzer he designed for Tackle HD “the most versatile buzzbait on the market.” It was created to simplify any of the nuanced adjustments buzzbait anglers tend to make.

“It can be a head knocker where the blade hits the head, or you can flex the blade so it squeaks and doesn’t hit the head,” he says. “You can take the skirt off it and put a toad or a swimbait on instead. I developed it to have these different attributes so it will work regardless of where I’m at.”

Watson throws the 130-size Whopper Plopper from River2Sea, rarely downsizing even if he encounters bass feeding on smaller threadfin.

“Walking baits are effective tools, but they move at a snail’s pace,” he says. “I’m covering water with three moving baits. I’m actually running into bass. When the fall bite is on, it’s all about how many casts I can make in a day.”

Matching tackle to the technique is critical in topwater fishing, and Watson believes he has pieced together “the deadliest topwater set-up.”

Watson swears his hook-up ratio with this tackle trio is unmatched, but he warns, too, not to strike too early.

“Your reaction must be delayed so that the rod, reel and line do all the work,” he says. “And set the hook with a sweeping motion.”