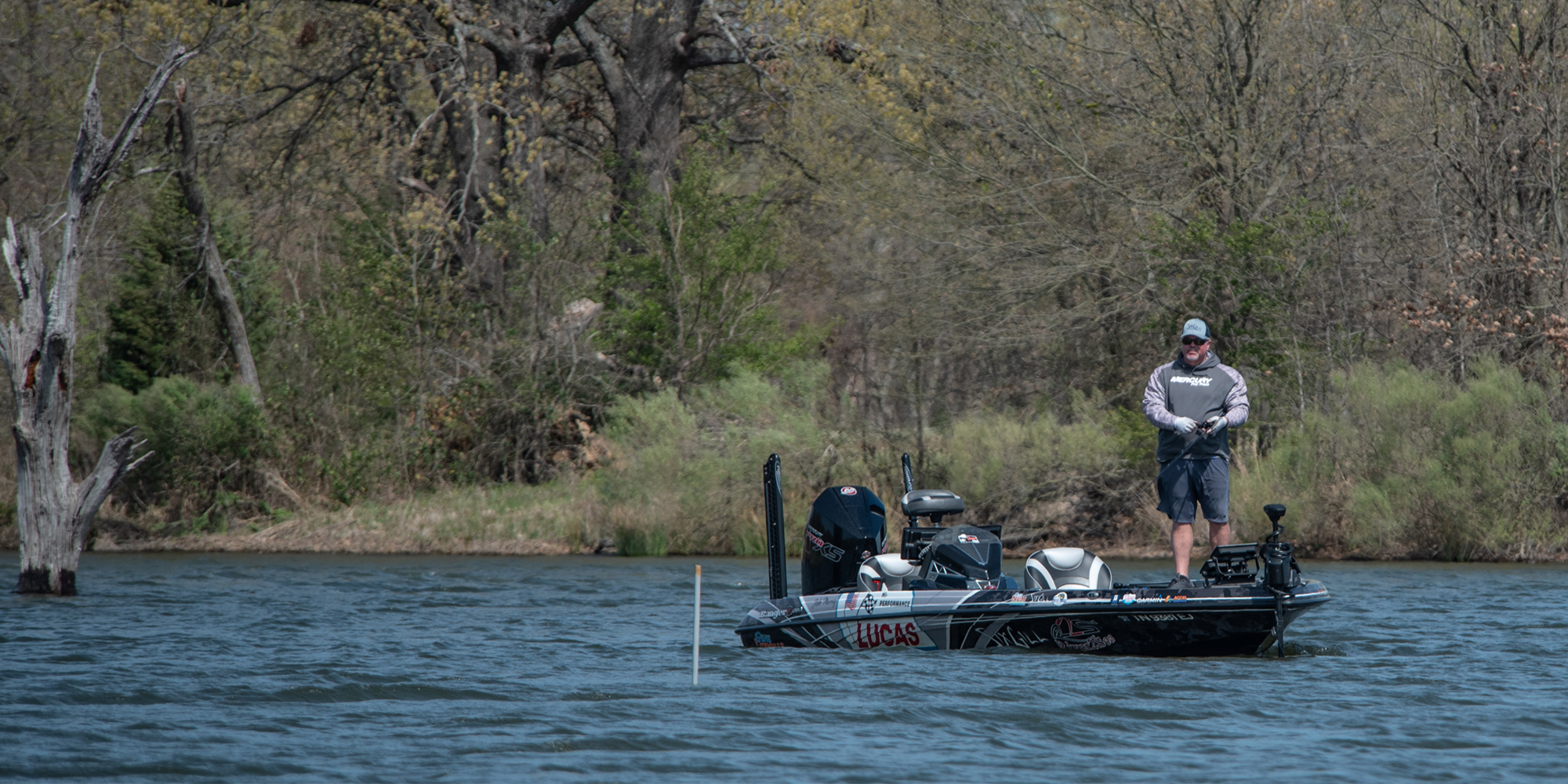 The spawn has ended, and soon big bass will vacate the shallows for their summer homes on the Tennessee River ledges. But just what do bass do during the transition from spawn to ledge?

MLF pro John Murray has some thoughts on where they go and how to make them bite.

Murray readily admits that his own bass fishing education suffered one gaping hole before he moved from Arizona to his new home in Tennessee.

“One of my weakest links in tournament fishing used to be ledge fishing on the Tennessee River lakes,” Murray recalled. “It’s current related, more like river fishing. Now that I live on Watts Bar Lake on the upper end of the TVA system and only 15 minutes away from Chickamauga, I have a great chance to learn these lakes.”

And learn them he has!

Electronics has accelerated that learning curve for Murray as for his contemporaries, helping him understand locations and activity of bass schools and their migration to the ledges.

Watts Bar has schooled him.

“I always thought there was one big spawn, then all the fish moved out,” says Murray. “But that’s not the case. And the one thing I’ve learned is that transition areas before they reach the ledges are usually where you will catch them best. Find the subtle things and you will have really good fishing.”

The key to finding the “subtle” things is to work back from spawning areas. If you were on the water prior to the prespawn and noted the migration routes from cold water positions to prime spawning areas, you’ve won half the battle.

“The way the bass came in is the same way they come out,” explains Murray. “The secondary points, the first points behind the spawning areas. They are not out deep just yet, and they may well be suspending out there.”

“Topwater lures are the most natural choice for these conditions, whether it’s a buzzbait, wakebait, a walking bait,” says Murray. “Usually you find a lot of suspended fish looking up for shad, hanging just 5 or 6 feet deep but relating more to the main lake than they do where they spawned. They might be relating to cover, but not necessarily.”

The shad themselves provide reason postspawn bass aren’t in a huge hurry to get to the ledges.

“The shad spawn occurs shortly after the bass spawn, and the migration of bass to the main lake has a lot to do with the shad spawn,” says Murray. “At the same time bass are moving out, shad are coming in. They may not go way back to where the bass spawned. They may spawn on the main body of the lake somewhere – on a flat rocky point in a foot or two of water or a bluff point.”

His first area of concentration during the postspawn is the first deeper area with current movement.

“That’s where fish will group up. And working topwater baits is a good way to find out if they are there,” says Murray.

The transition plays to some of his favorite lures and strengths. He likes the buzz and presence of the River2Sea Whopper Plopper at this time, preferring shad colors like bone or white. “It’s a good lure for covering water,” he says. Lure size is determined by “matching the hatch” to the shad size.

Wakebaits perform a similar function and have an advantage under calm conditions. Walk-the-dog lures come into play as well.

If the fish are ignoring his topwaters, he’ll shift to subsurface offerings. With bass positioned higher in the water column, swim jigs give him a chance to deliver a jig at the bass’s eye level.

“A spinnerbait can be tremendous if you have off-color water,” says Murray. “Bigger glide baits, too. You have a lot of options, but I focus on baits running near the surface after the spawn.”