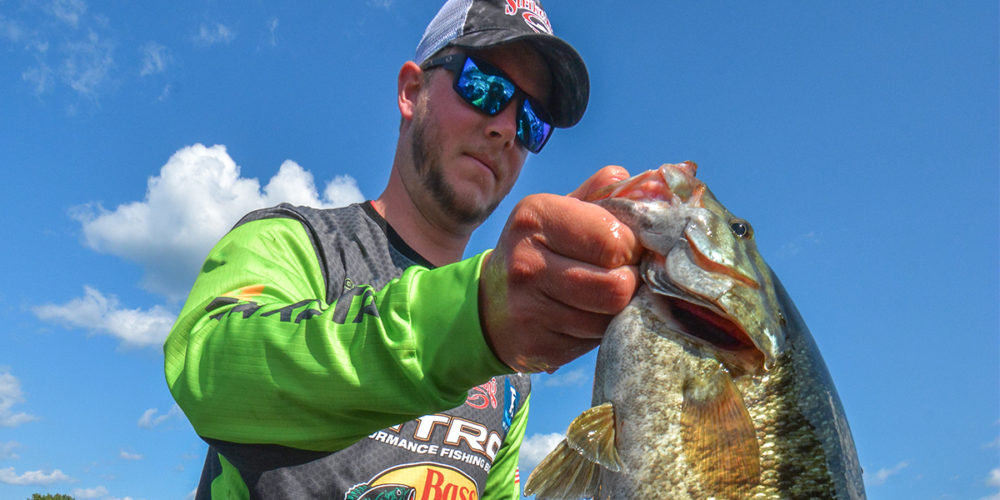 Living in Michigan, Jonathon VanDam has chased smallmouth all his life. He has three key baits for catching smallies in the fall. Photo by Joel Shangle
November 7, 2019 • Mason Prince • Major League Lessons

While temperatures are finally starting to feel like fall throughout the South, northern anglers like MLF pro Jonathon VanDam have been fishing fall conditions for well over a month. The Michigan native is known for his smallmouth knowledge and was willing to share three of his most reliable baits for catching northern smallies in the fall.

While anglers searching for largemouth will head to the shallow water in the backs of creeks in the fall, VanDam advises that heading offshore with a drop-shot may be the most effective way to locate smallmouth this time of year. The trick is in finding the right size and color of bait.

“I usually downsize my drop-shot baits in the fall,” VanDam said. “The smallmouth up here seem to be a little bit more picky this time of year with the dropping water temperature. The smaller size gives the bait a more natural appeal to the fish. I also change up my colors to more of a natural and translucent look. If I’m drop-shotting in the fall I go with a Strike King Half Shell.”

While a spinnerbait is a handy tool for largemouth, VanDam agrees that it can be just as effective when looking for smallmouth. Color is key for VanDam when he reaches for a Strike King Scorcher Spinnerbait.

“I like using a heavier spinnerbait that’s 3/4 ounce, with chartreuse painted blades,” VanDam said. “That particular color allows the fish to see the bait from a long way away. I don’t have an exact reason for this, but everywhere I’ve gone smallmouth fishing, they seem to love the painted blades as opposed to the shiny silver and gold ones. The water is so clear that they don’t really need help locating the bait with shiny blades. If I’m using a spinnerbait, I make long casts with a 7-foot-5 rod and a wind it on a high-speed reel.”

The last piece in VanDam’s fall smallmouth trio is a Green Pumpkin Strike King Thunder Cricket. VanDam says that a vibrating jig can be just what aggressive smallies are looking for when water temperatures drop, and that a vibrating jig is the perfect mimic for a common northern bait fish.

“I find that a vibrating jig really imitates the perch better than any other bait I’ve tried,” he explained. “With clear water and vibration, you wouldn’t think smallmouth would go after it, but they absolutely hammer that thing in the fall. Smallmouth like things that have a really erratic action, and they can’t stand something that has a lot of movement to it. The vibration of the bait, paired with the fish’s ability to see clearly in clear water, really allows them to hone in on a vibrating jig.”

If you find yourself in smallmouth country this fall, be sure to give VanDam’s trio of baits a try.