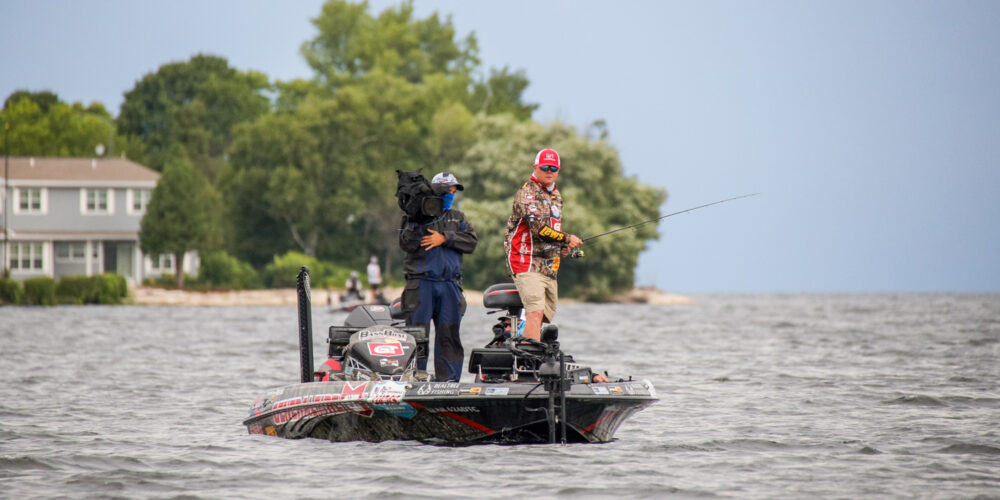 Late summer is a time of subtle transition on classic ledge lakes. The dog days linger, but the evening air has a faint chill. The effectiveness of ledge bite staples like football jigs, big worms and hair jigs diminishes.

But, on lakes with lots of shad on the menu, Mark Rose has a bait he can count on.

“A swimbait is one lure I fish offshore that is so versatile that I can fish it in the entire water column,” says Rose. “I can catch fish on offshore ledges with a swimbait in 5 to 10 feet of water one day, then catch them in 20 feet the next with the exact same bait. I can let my bait go all the way to the bottom, tick rocks on the retrieve and catch them. I can catch suspended fish with it. I can catch them shallow. It’s that versatile. A football jig or a big worm are effective when bass are locked in on that type of forage. But if it is shad they are locked in on, the swimbait is more effective than anything else.”

With the cooler nights of late summer and the arrival of a full moon, bass begin to migrate from main lake ledges into pockets and creek arms.

“Shad are moving into these areas,” he says. “And bass are following them in.”

Why does the swimbait consistently produce during this transition? Rose vouches for the bait’s realism.

“The thing about the swimbait is that it’s natural,” he says. “It really looks like a shad.

“It doesn’t have a big plastic bill or treble hooks. It has no rattle. And it does have a nice swimming action. A shad doesn’t get a big thrust from its tail. It quivers. The body has a slight shiver. That’s what a swimbait does.”

His swimbait strategy at this time of year calls for one major adjustment.

“I downsize the overall profile of my swimbait,” he says. “If I have been using 6-inch or 5-inch swimbaits on the deep ledges, I may change to 3-inch or 4-inch baits because it’s the time of year when bass prey on smaller forage. The fry from May, June, and July form big schools, get into big balls and go into the backs of creek arms. Sure, bass will still eat the big gizzard shad and bluegills, but they really get locked in on smaller shad. Those big schools of immature shad are easier to key in on.”

“The 4- and 5-inch Swim-N-Shiner is a slimmer profile bait with tighter action,” he explains. “I like to fish it in clear water, particularly in the Green Gizzard and Ghost Shad colors.”

Jighead size varies with bait, depth and wind conditions. The 3/4-ounce head is his workhorse when he is fishing main lake ledges with the larger profile Shadalicious from the surface down to 15 feet. For deeper or windier conditions, he will opt for a 1-ounce head. He fishes the Blue Gizzard Shad color almost exclusively with the Shadalicious.

For clear water fishing, Rose offers an additional tip: carefully shave the paddletail down with scissors to give the bait a more subtle kick.

He prefers unpainted jigheads. “I don’t think anything has more of a shad look than regular old lead, especially if it has oxidized a bit.”

He lauds the Squadron Head jigs for their “good shad shape” and stout hook, but he says the jig’s design adds a little something extra to the paddletail’s action, too.

“That 60-degree line tie keeps the bait horizontal and pulsating as it comes through the water,” he explains. “The bait is doing a shimmy. It’s not just pushing water with the paddletail doing all the work. It does a real good shad-type shimmy.

“That’s what I mean by natural.”