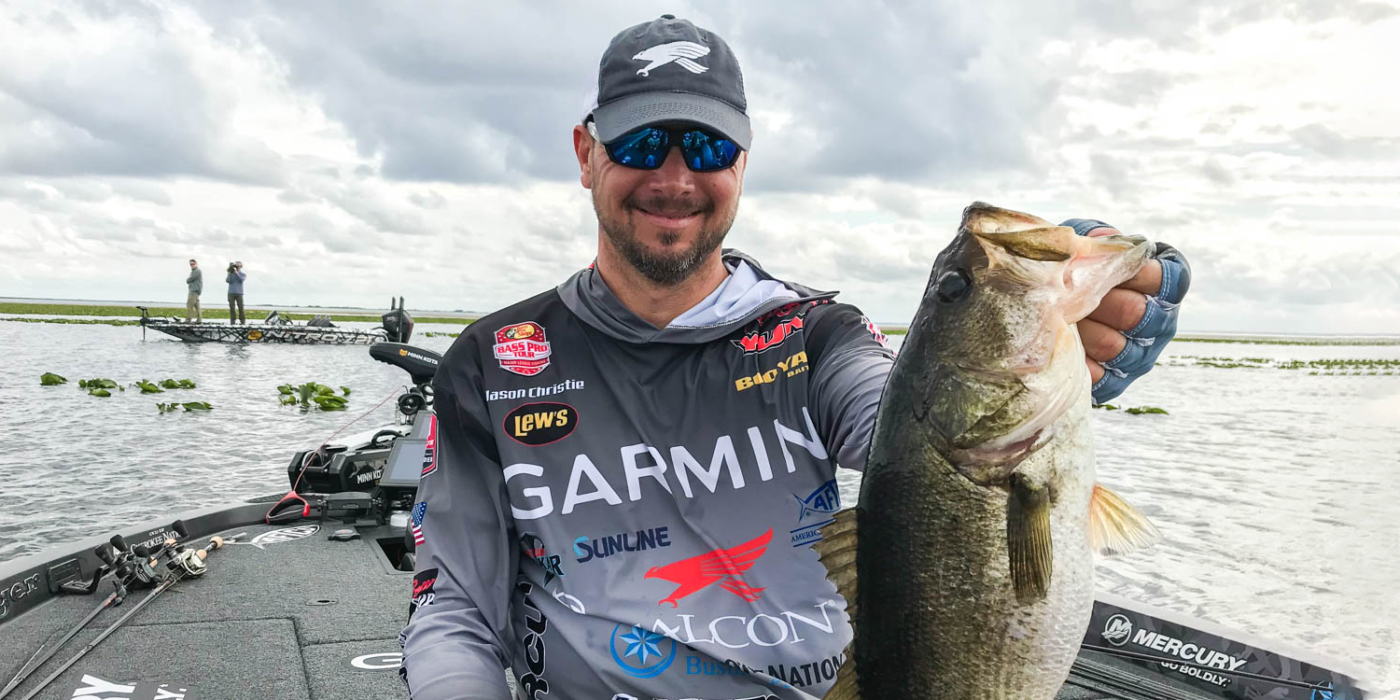 Jason Christie will reach for his frog rod more and more as summer goes on.

As the temperature begins to rise and the days get longer this summer, it gives many a weekend angler a chance to head out to their local fishery in search of a bite. Some of those anglers – especially some of our Bass Pro Tour pros – will reach into their tackle box for their favorite frog.

We tapped into a couple of Mercury pros – admitted frog fanatics Jason Christie and Fred Roumbanis – for some keys to using the amphibious allurement to its full potential.

Christie loves throwing a frog when the mercury starts to rise in July. When the dog days of summer start to hit, he knows just where to look for fish, and where to throw his frog.

“When the weather starts getting hotter these fish just flock to the shade,” Christie explained. “That’s good news for the angler because it makes fishing a lot more predictable. One of my best days using a frog came during the dog days of summer on a lake with no structure, and all I was fishing was shade. You throw that frog near them and they could be in just inches of water, and they’ll still come and get it. It doesn’t get much more natural than that.”

Roumbanis agrees with Christie on his shade assessment. It’s no secret that Roumbanis enjoys throwing a frog whenever he gets the chance.

“A frog is a deadly weapon during the summer and it’s something that I have tied on my deck all the time,” Roumbanis said. “I like to work vertical shade. Whether that be trees or reeds casting a shadow, you have to just work around the sun. The shade is where those fish are going to hang out because we all know that bass don’t have eyelids. When it’s sunny out, look for the shade.”

Anytime a Fine Time for a Frog

The early-morning topwater bite is a prime time to throw a frog, but Christie says that sunrise isn’t the only top time to utilize a frog.

“The cool thing about fishing with a frog is that you can catch a big one from the time the sun comes up until it goes down,” Christie revealed. “There seems to be peak times throughout the day when they bite—first thing in the morning, sometime in the afternoon, and then right before the sun goes down—so it’s not just about getting an early-morning topwater bite. You can catch them on a frog throughout the day.”

Roumbanis says that there isn’t just one particular place where a frog can be a good bet – there are plenty of areas of a lake that provide quality cover to throw a frog around.

“Matted vegetation and water willow are great places to throw a frog,” Roumbanis tipped. “A lot of areas where you have ducks and other waterfowl, you’re going have this ‘cheese’ or moss growing on the water. If you can get a frog on top of that, it can be deadly because later in the day the fish use that cover as shade.”

While vegetation might be a no-brainer for a lot of anglers, Roumbanis has another place to look where he believes you can catch bass when you can’t find vegetation.

“I think boat docks are the most overlooked targets,” Roumbanis said. “A lot of people just don’t think about throwing a frog around a boat dock but I love to do it. You can throw a frog so far back into and underneath the dock without getting it stuck like a jig would. You should be able to see the fish when they are around a dock and if they’re there, throw a frog around them and watch it go to work.”

Monroe Attacks Postspawn with Frog, Topwaters – Here’s How You Can, Too