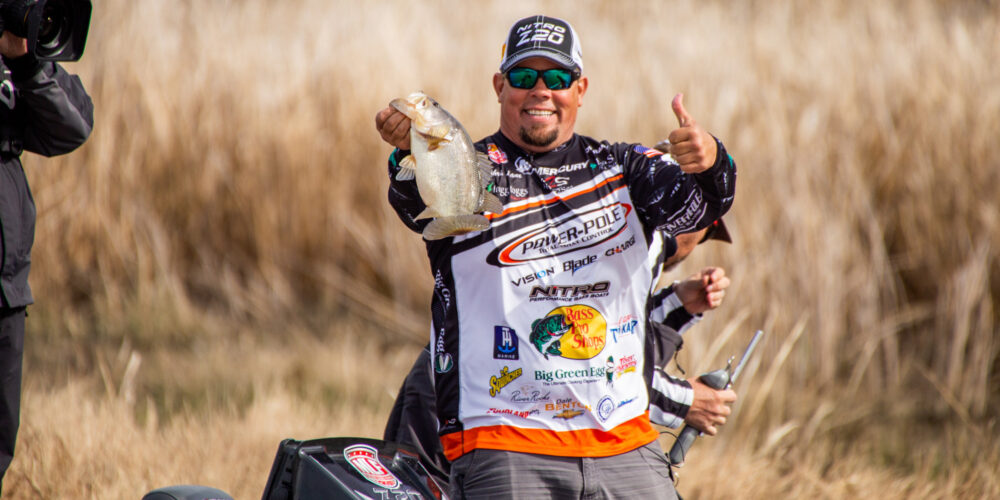 Whether you’re a meditation guru or a bass fisherman, there’s magic in moving water.

“The most important thing is to fish when they’re pulling water if you can,” says MLF pro Chris Lane, who rides that magic regularly on his home water on Lake Guntersville and other reservoirs in the Tennessee River system affected by hydroelectric power generation. “Fish always bite better when you have current.”

The current comes from the turbines of the hydroelectric dams that create these legendary lakes. Bass position themselves to take advantage of feeding opportunities created by the current. Find that combination of moving water, forage and prime habitat and you’re positioned for a hot bite.

Lane capitalizes on the bite during peak periods by fishing where moving water intersects with forage-rich habitat.

“On lakes with a lot of vegetation, fish have a tendency to push up to the grass edges when they’re pulling current,” Lane says. “That’s where the fish are feeding. They’re very aggressive, and you can catch them on topwater lures.”

For “power on” conditions, his topwater choice is the River2Sea Whopper Plopper. “You can really wake those fish up with that lure if it’s choppy,” says Lane. “It’s fantastic.”

During these periods, he fishes aggressively.

“You can fish quickly if they’re pulling water,” he says. “If you’re not getting bites, you’re probably not fishing the right spots. You can still catch them when they’re not pulling water, but they won’t be nearly as aggressive.”

The absence of current makes for a tougher bite. He helped to develop the Lane Changer from River2Sea with placid “power off” conditions in mind.

“If they’re not generating and the water is calm, no ripple, the Lane Changer is the bait,” says Lane of the namesake lure, a topwater featuring soft plastic propellers and a unique sound. “We invented it for really calm water – I like to present it slow and easy. Pop, pop. Let it sit. Pop, pop. Let it sit.”

Anticipating periods of power generation with the help of Internet-posted schedules can help an angler maximize fishing time in high percentage areas when bass are feeding and most aggressive.

Fall finds bass moving from prime structure on the main lake into creek arms. The migration puts other “current” strategies into play.

“The biggest thing to remember with creek arms is that the water is either rising, or it’s falling when you have power generation,” says Lane. “If you have rising water, the fish will be pushing back into the creek arm. If it’s falling, they’ll pull out to the points of the tributary or they’ll be looking for a little bit deeper water because they know the water level is going down. That’s an important key.”

Down the Tailrace, Under the Bridge

Moving water is what makes tailrace fishing so wildly attractive. Water rushing from a dam creates visible current edges and eddies, and it attracts active fish.

“Any time you have water running, whether it’s a stream or a creek, you’ve got a shot to catch fish,” says Lane.

Apply that same principle to the current produced by rising and falling water through bridge passages into back areas.

“On Lake Guntersville, we have a lot of bridges with roads passing over them,” Lane says. “Anglers can access both sides. If water is falling, the flow is going to be going toward the river. If water is on the rise, you’ll want to be on the other side. That’s the important thing to remember.”

The fabled TVA reservoirs have abundant lessons for the bass student, but moving water holds the most important key.

“The Tennessee River system is simple,” sums Lane. “The biggest thing is finding creeks and eddies – current. It doesn’t matter if you’re downriver or upriver. If water is going through the whole system, the fish are going to be biting everywhere. If they’re not pulling water and everything is just dead, look for fish around structure.”