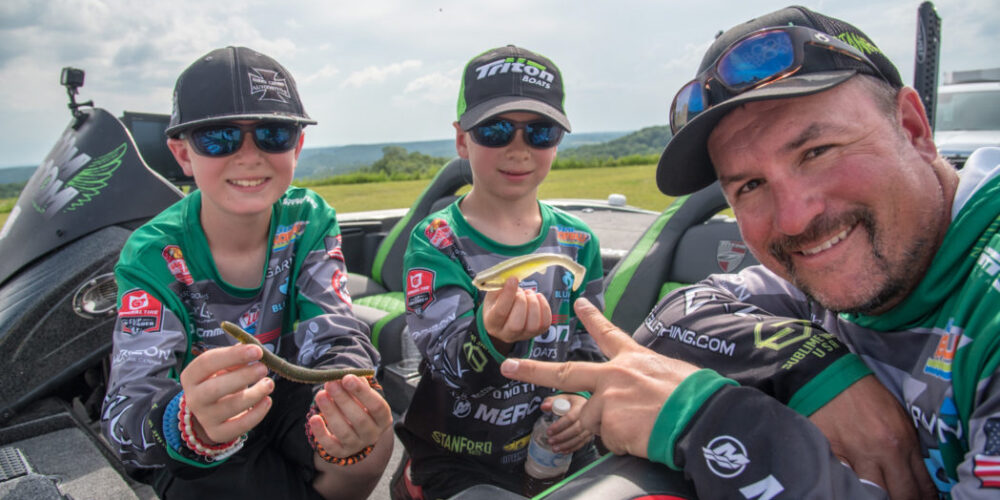 With his bass fishing roots in California, swimbait fishing has become engrained in Fred Roumbanis’ fishing style. He loves throwing giant swimbaits, but also has a signature line of “Boom Boom” swimbaits from Optimum Baits that come in 4-, 5- and 6-inch sizes.

These are more all-around sizes, making them a versatile choice anywhere bass swim, not just in locations where stocked-trout are a primary forage.

Roumbanis was able to secure a berth in REDCREST in 2019, thanks in part to catching fish on swimbaits. He’s proven that it’s a viable bait over the course of several different seasons and on a variety of fisheries.

Many anglers categorize swimbaits as “big fish” baits, and they are, but they’re also well-suited for tournament-sized bass. Roumbanis pointed out that a 5- or 6-inch swimbait is not much bigger than a crankbait, ChatterBait with an attached trailer or any other lure that anglers use to fool bass.

“A 5-inch swimbait is the same length as a 5-inch Senko, and everyone throws those,” he said. “It’s really no different and is the perfect size meal for bass.”

Roumbanis was able to secure an 8th place finish at this year’s Bass Pro Tour Stage Seven on Table Rock by mainly catching spotted and smallmouth bass on a 5-inch line-thru version of his Boom Boom swimbait.

When asked about how he fishes a swimbait, his approach is surprisingly simple.

“The biggest thing is just to throw it, catch fish, and get confidence with it,” Roumbanis said. “It’s something that not everyone else is doing, and the bass don’t see it as much. The great thing about fishing a swimbait is that you don’t always need a specific spot, because it is a pattern you can duplicate on other areas of the lake.”

“I would just chase the breeze because calm conditions make it harder to get a bite with a swimbait,” he said.

He most often uses a simple cast and retrieve when fishing a swimbait.

“Just a steady retrieve is the best. You can fish it slowly, and it stays in that part of the water column, unlike a crankbait or jerkbait,” Roumbanis advised. “It shines when the bass are suspended or chasing baitfish.”

Another plus to throwing swimbaits this size is that there is no need for special gear or giant swimbait rods.

Roumbanis likes these swimbaits on a crankbait rod, either a Dobyns 704CB (7-foot medium) or 765CB (7-6) medium heavy) depending on how far he’s casting. He will also alternate between 12- to 17-pound fluorocarbon, depending on how high in the water column he wants the bait to run. The more he wants the lure to sink, the lighter the line he will spool up.

He will also sometimes add a unique tungsten ball inside of a screw that attaches to the treble hook to get the bait down deeper. That item is called the Zappu Abare Dama or “Wicked Ball.”

“You also don’t want a rod that is too stiff, and when you get a bite, it’ll just load up,” Roumbanis said. “The hookup on the Line-Thru swimbait is incredible. The treble hook will get them, and the bait will slide up to help preserve the bait better.”