Shryock Takes the “Power” Approach to Fishing a Senko 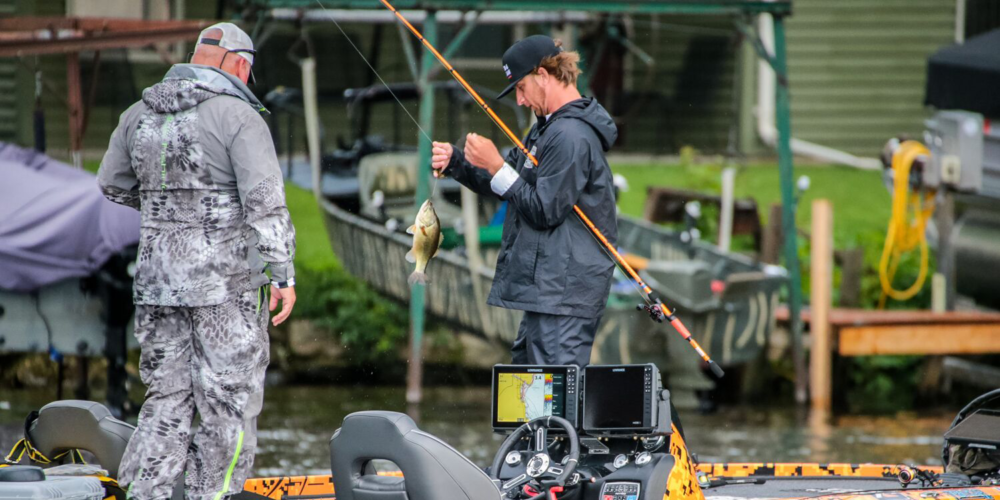 I gave MLF pro Fletcher Shryock a call to talk to him about the benefits of using a Senko because he had mentioned in the past how much he enjoyed fishing the popular stick worm. Lucky for me, I caught him at the perfect time.

“I’m actually flipping a Senko right now on Lake Guntersville in Alabama,” Shryock said with a laugh as he searched for an early-afternoon bite.

Shryock knows just how versatile a Senko can be, not only when competing on the Bass Pro Tour, but even when he’s just having fun on a lake close to home.

“A Senko works east to west, north to south all across the country,” Shryock explained. “I don’t really know what the fish think it looks like, but they eat it no matter what.”

The Ohio native prefers to use a Senko when the bite is tough because it doesn’t resemble a crawfish or another creature-style bait. Shryock knows from experience just how much effort can go into eating a crawfish for a bass.

“I’ve had problems when using a craw bait or a creature-style bait that the fish bite off the pinchers of the bait before they actually eat the bait,” Shryock detailed. “I’ve seen fish in tanks tear off the appendages of a crawfish before they eat it. Maybe a crawfish is too much to take on with its pinchers and everything, that’s why they go after a Senko because it looks so easy to eat.”

Shryock likes to rig his 5-inch Gary Yamamoto Custom Baits Senkos either weightless and wacky or Texas-rigged, paired with a variety of different weights. His standard weight is a 5/16-ounce but he has moved all the way up to a 1-ounce weight if he is flipping through matted vegetation. When it comes to pitching his worm however, he gets a little more creative with his setup.

“I do something different when I Texas-rig a Senko when I’m pitching,” Shryock revealed. “I use nail weights and I weight one end of the Senko, usually the head. When I weight it that way, I rig it backwards. It makes it a lot easier to skip it under docks – I call it ‘shooting docks.’ As long as you keep the bait straight, it will take off away from you and get under floating docks.”

The Spiderwire pro says that he actually catches more fish when he power fishes a Senko rather than when he finesse fishes one. Shryock says he prefers using a 5-inch green pumpkin Senko with purple flake as his universal go-to. Add a fairly heavy weight on to that rig and you have a great tool to shoot under docks, according to Shryock.

“I use a baitcaster when shooting under docks and I can cover a lot of water that way,” he said. “Yes, it’s kind of finesse fishing, but I’m getting the bait into places where no other bait can get to. That’s what makes the Senko so versatile.”