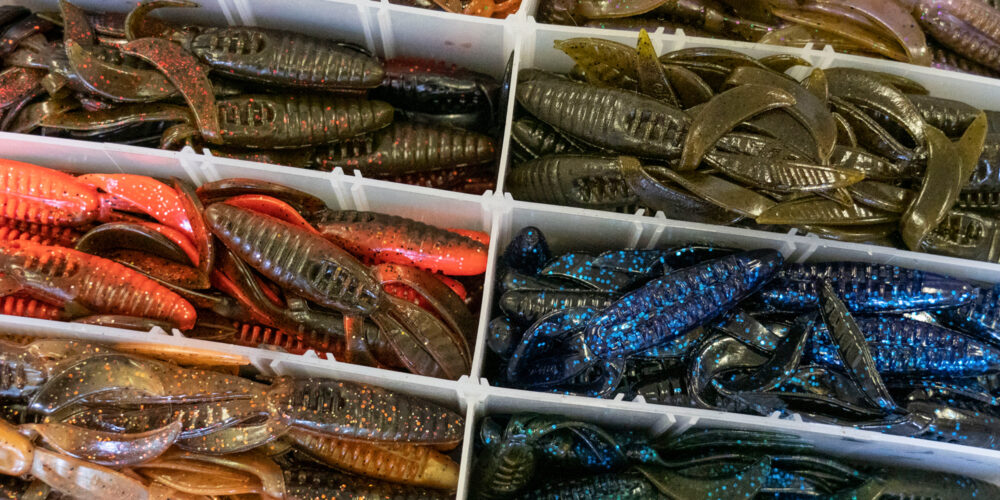 No bait category sports a more dizzying array of options than soft plastics, and few men in the bass world can dissect those options bait by bait with Skeet Reese’s eye for detail.

The California pro has had his hand in the design and testing of dozens of plastics. Each season finds him chapters deeper in understanding how shapes and features impact bait image, movement and bass response.

So with the first days of spring upon us, just what styles of soft plastic baits make Skeet’s “must” list?

“Prespawn is the time of year that a jig reigns supreme, and the trailer can make all the difference,” says Reese.

His choice for clear water conditions is a chunk-style trailer, the Berkley PowerBait Meaty Chunk, patterned after the old pork chunks of jig-‘n-pig lore.

In murkier conditions, he opts for trailers that deliver movement and vibration and create commotion.

“In dingier water, you want noise and rattles. That’s when trailers with appendages that flap like the PowerBait Chigger Craw or Crazy Legs Chigger Craw come into play,” he says.

“I’m pitching flipping baits into nooks and crannies and pockets where bass are spawning or getting ready to spawn,” says Reese.

That’s the kind of application he had in mind when he designed the PowerBait Pit Boss, a “compact creature-style bait with a ton of swimming action,” for Berkley.

The core of the bait is streamlined to penetrate cover, but the tail segment, featuring two broad sickle-shaped tail flappers and a pair of falchion fins, is all action. Bottom ribs and a corduroy-surfaced nose segment displace plenty of water. The combined elements produce frantic swimming action in a bait that moves water, kicks up silt and causes commotion.

“Nothing swims like a Pit Boss,” says Reese. “The flappers separate, the appendages counteract each other so they are constantly swimming. It’s a lifelike, versatile bait that you can flip and pitch, put on a swim jig or Texas rig. I also fish it a lot for smallmouth. It’s my ‘go-to.’ Some guys fish tubes; I fish the Pit Boss.”

Count Reese among the many who tout the stickworm as “one of the deadliest baits you can fish.” The bait seems to reach the height of its effectiveness in spring.

“There’s something about the simplicity of the stickworm and its slow subtle fall,” says Reese. “A weightless fall looks more natural and realistic, and it’s especially deadly in spring.”

Numerous manufacturers offer stickworms, but Reese hails The General in the Berkley PowerBait line as the best in the bass wars.

“It has the right shape and the right action. When it falls, it quivers, and that is one of the key components,” says Reese, who fishes it on a 2/0 or 3/0 Trokar TK 180 hook. “But that PowerBait scent allows the fish to hold on.”

If the stickworm seems the humblest hero in Reese’s spring arsenal, make room for the Ned rig.

“The Ned rig is very popular when the bite is tough and you just need to get bit,” says Reese. “It has become standard for a lot of guys.”

Reese takes pride in the design accents he has brought to soft plastics. The humble half-worm of the Ned rig had him feeling like Michelangelo facing a block of marble.

“I looked at other Ned worms, and they are featureless…and I don’t like featureless,” he laughs. “I always want to make a bait better.”

The “Ned” result is a Ned-length grub for the PowerBait line called the Cash Out. It bears a bit more resemblance to a baitfish than the typical Ned plastic and features a high-backed head portion with a ribbed belly, tapering to a spade tail. The upscale grub retains the same shape-shifting ambiguity of the Ned half worm. (Is it hellgrammite, leech, crawfish, baitfish…?) Reese credits the ribbed belly, a feature he has used in other bait designs, for greater water displacement and a tantalizing drop.

“I made it as light as possible, and that slow fall draws a lot of bites,” he says. “The tail is like a rudder. It gives the bait more glide on the fall.”

Other plastics that factor into Reese’s spring presentations include:

Bladed jig trailers: Bladed jigs rank among today’s hottest bass baits, and, matched to the right plastic trailer, they truly shine in spring. Reese designed The Deal for Berkley’s PowerBait line. It features flapper-type tail segments akin to those in the Pit Boss.

Neko-rigged finesse worm: The Neko rig is an ever-reliable finesse option. In spring, Reese favors it on southern waters where Florida-strain bass have been introduced.

“Florida largemouth don’t do as well as northern bass after a cold front,” says Reese who designed the new Straight Money for Berkley, his choice for the Neko rig. “If I’m fishing for Florida bass under post-frontal conditions, finesse gets me more bites.”

Try “Skeet-shooting” with these lure types this spring!