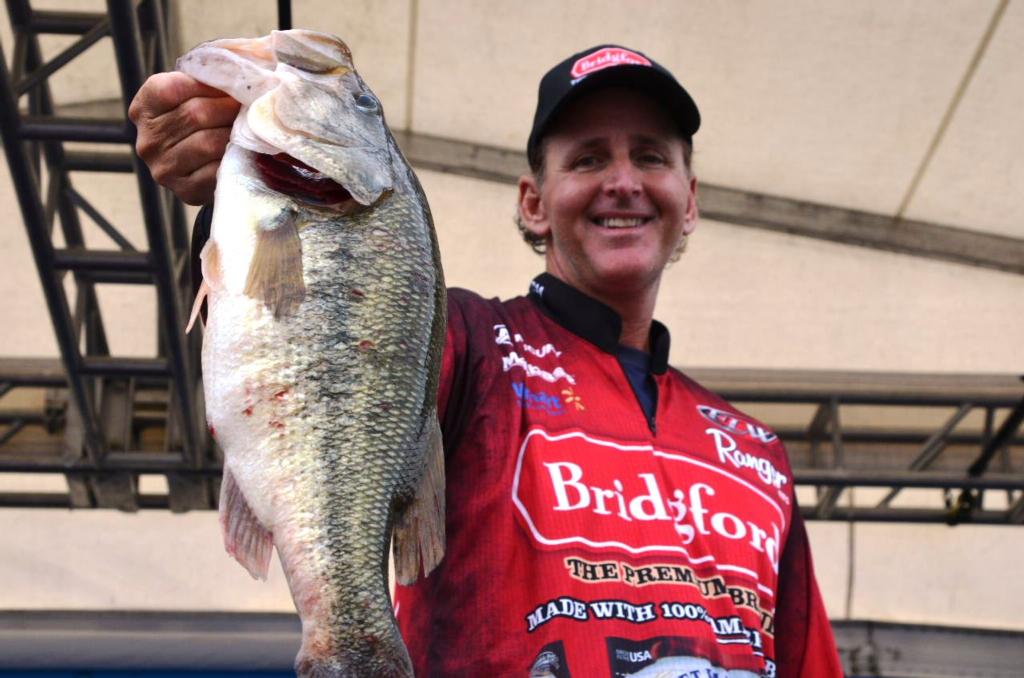 (Editor’s note: Starting immediately, FLW Tour pro Randy Blaukat has agreed to provide a pre-tournament blog for each Walmart FLW Tour event of the 2014 season. This is his first installment.)

The second Walmart FLW Tour event of the 2014 season on Lake Hartwell (March 6-9) will be a radical departure from the Tour opener last month on Okeechobee.

While many of the top finishers at Okeechobee relied on one or two giant bites in and around the lake’s famous take-a-number community holes, Hartwell will be an event where all the anglers can spread out, fish undisturbed and post consistent limits of 3-pound fish which have the potential to keep you fishing on Sunday.

That perspective alone is why I feel that Lake Hartwell is a “perfect” tournament lake.

With 56,000 acres of water, lots of creeks and coves full of docks, Lake Hartwell fishes big and is an excellent “pattern” lake. In my opinion, those are the key elements a lake needs to deliver a fair playing field to its competitors.

However, we are going to find Hartwell a bit different than we did during the last Tour event held there in 2012.

Currently (but always subject to change with unforeseen heavy rains), the lake is about 5 feet higher than it was in 2012. This may or may not play a factor in the overall techniques used and weights we will see.

Regardless, Hartwell will be a textbook pre-spawn event, which will open up dozens of techniques that could possibly produce a top-10 finish or a win.

The myriad ways to catch bass on this lake will no doubt keep all of us up at night thinking about the potential strategies and tactics to employ.

And all of the competitors are thinking the same thing right now: How do I want to approach my practice period?

To be sure, it’s not like Okeechobee where you tie on a ChatterBait, a punch skirt and head straight to the North Shore. On Hartwell, you can catch fish all over the lake, with about everything you have packed into your boat.

In fact, right now as you are reading this, many of the FLW Tour pros are remembering and thinking several of the following things …

1) Okay, Brent Ehrler won in 2012 by drop-shotting and dragging a football head for suspended fish out in the middle of the lake while spending most of the time looking at his graph. (Man, I’m going to have to try that some.)

2) The rivers produced a “take-a-number” scenario where all the guys who don’t like to fish over 3 feet deep were piled up on each other. (And, most likely, every dock up there will have a constant spinnerbait running by it.)

4) Tom Monsoor was catching them big-time on that dang swim jig of his two years ago in clear water. (That’s all that dude throws … and he’s the only guy who can catch them on that thing 12 months a year!)

5) Remember when Jason Christie won a few years ago using a thumper spinnerbait in Beaverdam creek! (That place will be covered up.)

7) It’s the pre-spawn, so why don’t they bite a jerkbait very good on Hartwell … Oh man, those dang blueback herring … jerkbaits have never work good on blueback lakes. (Too bad we are not on a threadfin lake … all anyone catches on a jerkbait here are stripers.)

The challenge pros will have at Hartwell this March is deciding what part of the lake to fish with which technique. This can be a dangerous situation for a lot of anglers. With so much water and so many variables, unless you begin catching fish and establishing a pattern pretty quickly, there is a tendency to fish too fast and fish “over” good areas.

Take dock fishing for example. Most of the coves on Hartwell are full of them. The fish can be positioned under the walkways, under the lifts, on the bottom off the ends, suspended just under the floats, in brush just off to the sides or in-between the docks.

And unless you are throwing the right lure, the right color, and the correct weight, you may pass over a stretch of docks that are loaded with fish. Then you will run the risk that the next pro who comes through there with the right presentation will come out of the event with a $10,000 check on those very same docks.

That is why I love Hartwell as a tournament lake. Creativity is rewarded. There are no “holes” and your imagination and intuition can be used to the fullest extent.

The top-20 cut will likely be about 14 pounds per day, and overall 55 to 60 pounds should come close to winning the event. 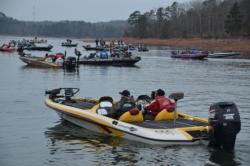 With the rising, cold, stained water that’s been coming into the lake, I don’t see the rivers playing as big as a factor this year as they did in 2012. That year, the rivers were low and stable, and the fish were more concentrated.

As usual, the docks will kick out a lot of fish, and I think you will see jigs as a dominate player around them.

A big key here will be the use of side imaging and sides-cans there to find the brush piles near the docks. Although there are thousands of docks on the lake, most of them are fishless. Identifying the key docks with brush, and fishing slow is going to be one of the main deals.

The pattern I see emerging for the likely winner, and the most potential for a big bag of fish, is fishing for suspended fish in the deep timber. The water level and cold leading up to this event are going to make this pattern really good. Drop-shots, jigs and spoons should be the ticket.

I fish Table Rock Lake in Missouri a lot, and that lake sets up just like Hartwell in terms of deep timber. This is where all the fish on Table Rock are right now as well.

Although an angler who adopts this pattern stands an excellent chance of winning the event this year, most FLW pros won’t even bother with it.

Idling for hours, looking for fish and structure takes confidence and patience. After a few hours out deep without any success, most of the pros will be on the bank, chunking and winding in their comfort zones.

While these are my views and predictions surrounding our second FLW Tour event, in all likelihood several stories will unfold of unusual or oddball patterns/techniques that either produce a win or some high finishes. And that is the beauty of tournament bass angling – imagination and creativity sometime win out over technology and intellectualizing.

Best of luck to all!