Martin Aiming for the AOY 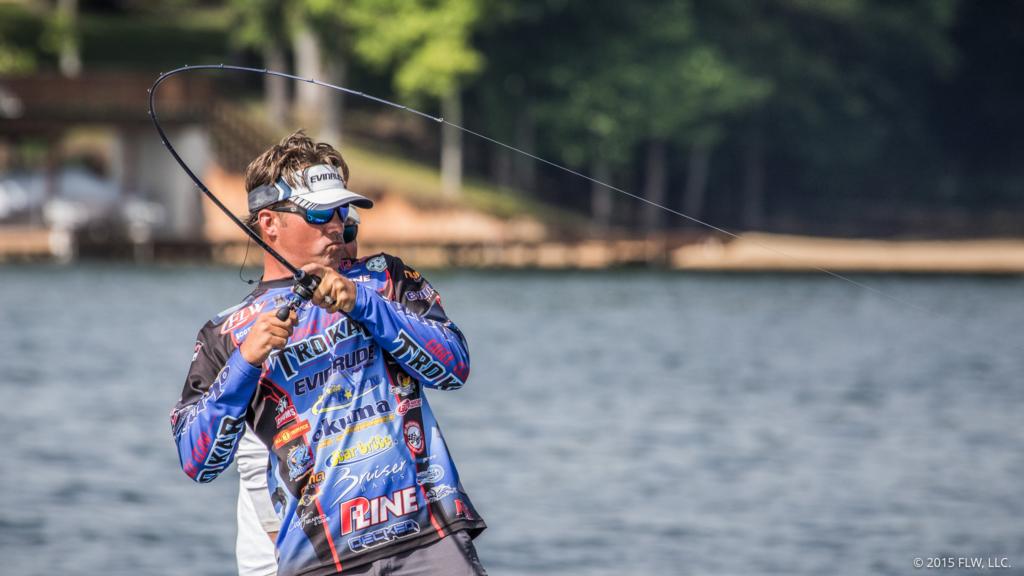 A big kicker or a stump? Turns out it was the latter, though Scott Martin had high hopes when he set the hook. Photo by Colin Moore. Angler: Scott Martin.
June 24, 2015 • Chris Burgan • Angler News

Scott Martin knows how to win. He won the 2011 Forrest Wood Cup. He is tied with Brent Ehrler and David Fritts for the most Walmart FLW Tour victories of all-time with five. He also has an FLW Series victory and trails only David Dudley in career earnings.

This week, Martin’s sights are set on his next career achievement – an Angler of the Year title.

With only one event left in the season, Martin has set himself up to make a serious run at the prestigious award. After accumulating 914 AOY points through the first five events, he is just 31 points behind AOY leader Bryan Thrift and 22 points behind John Cox, who’s in second place. Considering that the setting for the finale of this year’s AOY showdown is the Potomac River, the body of water where Martin won an FLW Tour event in 2012, he is certainly within reach of achieving his next big award, but his success thus far stems from a strategy formulated clear back before the season even began. 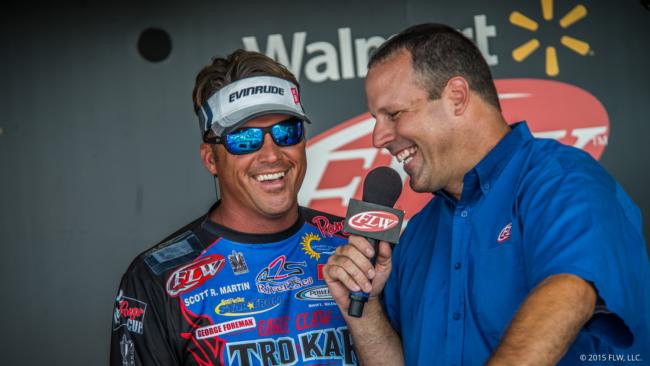 In Episode 70 of the FLW Podcast, which was recorded in March just before the second Tour stop of the year on Lewis Smith Lake, Martin explained his season’s game plan regarding the AOY: “It’s something that has eluded me. And it’s something that over the years I don’t think I’ve ever really focused on winning. I’ve always focused on winning tournaments. I take risks sometimes.”

The risks have paid off in the past. Choosing not to play it safe and swinging for the fences led to winning tournaments. But, when the gambles didn’t pay off, Martin suffered AOY killing finishes.

“If you look at my track record, I’ve got six wins and quite a few top-10 finishes, but also a handful of bombs,” Martin says. “Those bombs are a result of me trying to win, to do something extraordinary, when a lot of other competitors know to throttle back and realize they’re not going to go for the win on every one. That’s been my approach a little bit more this year – to be a little bit safer and really try to focus on being more consistent.” 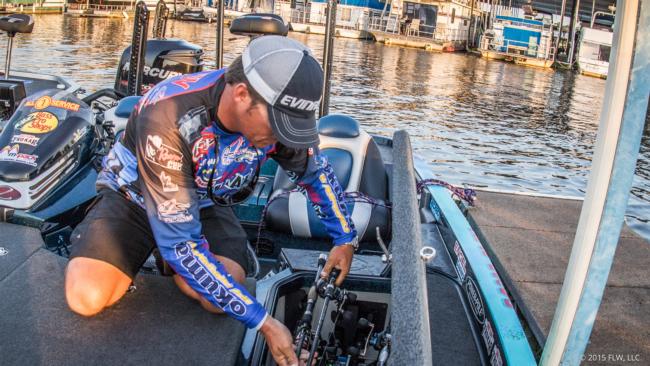 After 15 years on Tour, Martin finally feels like he has all the tools in his arsenal to really make a run at the AOY title. For instance, deep, clear lakes such as Lewis Smith in Alabama no longer scare the shallow-grass guru.

“Growing up in Florida and fishing the styles that we do down here, I had to learn some bass fishing while on the road,” he explains. “I’m still learning every day I go out, but I’m starting to become a more well-rounded angler.”

Over the years, he’s picked up on tactics such as throwing drop-shot rigs, deep crankbaits and hair jigs.

“I’m not the best at any of them, but I’ve gotten pretty good at all of them,” Martin says.

Make the Cut and Move Up 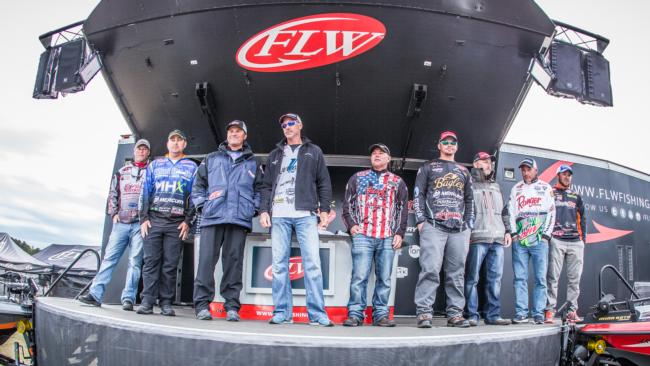 In previous years, the only thing on Martin’s mind was being in first place on the final day. This year, his focus has been making the top 20 after day two.

Once safely in the cut, he makes adjustments in order to move up the standings. A good example of this is Martin’s highest finish of the season at Lewis Smith, where he made the top-20 cut in ninth place and spent the weekend climbing up into fifth.

“At Lewis Smith Lake I was sight-fishing, however, I knew that I most likely couldn’t win the tournament by sight-fishing with the cold weather coming in,” he says. “In years past, I might have given up on sight-fishing and said, ‘I can’t win, so what’s the point? I need to go do what I can to win.’ Those are the tournaments where, in the past, sometimes I would hit a home run, and sometimes I would throw a big bomb out there. This time I played it safe.”

Over the weekend, Martin picked some off beds where he could, but he also fished for schooling spotted bass to get a limit and slowly peck his way a few more spots up the standings.

This season, Martin has made four of five top-20 cuts. The one time he missed the cut, at Lake Toho, he still finished high enough to cash a check in 41st place. 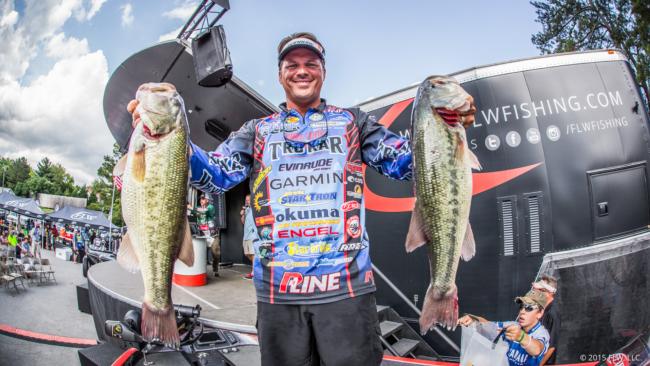 The final tournament of the 2015 FLW Tour season takes place this weekend on the Potomac River. In 2012, Martin went wire-to-wire there to win by 3 ounces. While he admits that the tidal river will fish differently than in previous years, Martin believes that finishing the season on a familiar body of water does yield some advantages.

“Am I going to catch them in the same place or with the same technique? No. It’s a different time of year,” Martin says. “Even if it was the same time of year, the Potomac River is always different. You can’t lean on going back to the same fields and expect the same results. So I have to fish with a hungry mind-set.

Martin needs to finish 32 places higher than Bryan Thrift, 23 places better than John Cox, as well as hold off those close behind him if he wants to take the AOY title home to Clewiston, Fla.

As the son of Roland Martin, nine-time B.A.S.S. AOY winner, Scott knows what winning the title can mean for a career.

“Over the years, my focus was winning tournaments. My dad has won a lot of events,” he says. “Winning events is awesome, but winning AOY is very important to a resume. There are a lot of guys who have a lot of high AOY finishes but have never won. Now it’s time. Whether I win it this year or next year or five years from now, it is my focus now.”

This ambitious task might have us seeing some classic Scott Martin fishing.

“I have to push the envelope a little harder with this one,” he adds. “They [Thrift, Cox and company] are going to catch them. I can’t finish 15th and expect to win. I may have to go back to my old mentality and throw everything I’ve got at it. I’ll either come in last, or I’ll win the tournament. I’m high enough in the standings that I won’t fall out of Cup qualification [with a poor finish], so now it’s all about winning the AOY. Work hard. Pray hard. If it’s God’s will, I can’t be beat.”