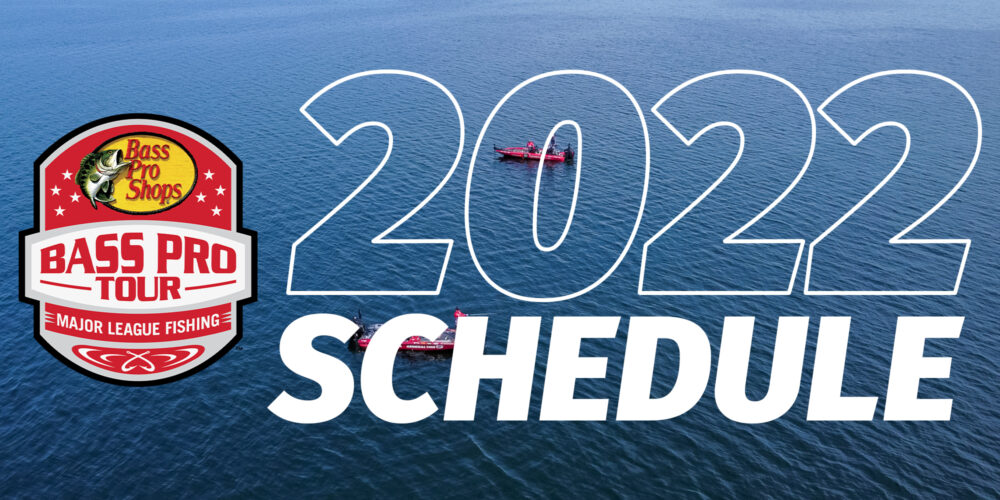 TULSA, Okla. – The 2022 MLF Bass Pro Tour season will be a hearty mix of intriguing new tournament locations, some notorious big-fish favorites and a diverse range of lakes and rivers that cover the country’s best largemouth, smallmouth and spotted bass fisheries.

The seven-event regular season will kick off in early February in northern Louisiana and wind its way through Texas, Alabama, Missouri, Tennessee, New York and Minnesota, with stops in Oklahoma and Texas for the league’s two marquee events: REDCREST 2022 at Grand Lake, Oklahoma in March, and General Tire Heavy Hitters at Lake Palestine, Texas in April.

“Everyone likes to see big fish and new lakes,” said MLF pro Josh Bertrand, one of five Bass Pro Tour anglers on the committee tasked with identifying tournament locations. “The majority of the 2022 schedule is big-fish centric, and it has some killer new lakes. It’s hard to have even one new lake on a schedule – the major tournament circuits have gone to most of the good tournament lakes for so long, it’s a challenge to find new lakes. But the 2022 schedule will be the first national tournament on multiple bodies of water, and that’s pretty exciting.”

“Stage One has the potential to be the tournament of the year if we get the right weather and conditions line up: I think we’ll catch some monster freaks in those lakes,” Bertrand said.

Ott DeFoe claimed the title the last time the Bass Pro Tour fished Lake Fork (Stage Three in March of 2020), but the circuit’s return to this famed big-fish factory in 2022 comes when fishing pressure is lighter, and big largemouth are in prespawn.

“It’s Lake Fork – everybody knows what lives in that lake,” Bertrand said. “We’ll be there when fat, prespawn fish are staging up. Guys who figure out key (nuances) and get the bites will catch some absolute monsters.”

Dean Rojas earned the champion’s hardware on Smith Lake in 2019. The Bass Pro Tour’s return to Smith in 2022 will come at prime time for the lake’s world-class spotted bass fishery (and a good time for largemouth, too).

“Smith Lake will look like a totally different lake than it did when we fished it in 2019,” Bertrand said. “Fish will be in prespawn, they’ll be at their biggest and fattest, and it’ll be a really tight, interesting tournament. We’re hitting that lake at just the right time.”

Originally scheduled to be the venue for REDCREST 2021 before a freak cold snap forced MLF to move the event to Lake Eufaula, Lake Palestine returns to the Bass Pro Tour schedule as the site of the third version of the league’s unique big-bass competition. General Tire Heavy Hitters will be Palestine’s first appearance on the national tour-level tournament scene.

MLF history runs deep at this 54,000-acre impoundment of the Osage River in the northern Ozarks: Takahiro Omori won the 2020 Summit Cup at Lake of the Ozarks, and it has hosted multiple Toyota Series and Bass Fishing League tournaments in late spring (many of which have required 23 to 25-pound bags to win).

“Lake of the Ozarks is a well-known lake, but as many times as the major tours have been to the Ozark (Mountains), we’ve never gone to the one with the biggest fish: Lake of the Ozarks,” Bertrand said. “That’s going to be a really interesting tournament, it’s a great fishery.”

June is the right time to be on the Tennessee River, but the move upstream from Lake Chickamauga to Watts Bar brings a new element of discovery to the fifth regular-season tournament of the 2022 season. At 39,000 acres (with 722 miles of shoreline), Watts Bar should fish big.

“All of the Tennessee River lakes are amazing fisheries, but on a lot of those lakes, you’re fishing on top of each other,” Bertrand said. “Watts Bar is big, and it’s unknown to most of us. Everyone loves to see the pros on a level playing field, and going to new, unfamiliar bodies of water gives you the most level playing field you’ll ever get.”

Stage Six – Cayuga Lake
Union Springs, New York (Aug. 6-11)
MLF hosted the Championship Round of the 2020 Heritage Cup on Cayuga Lake, a long, narrow member of the Finger Lakes in central New York. This 38-mile-long glacial lake is deep (435 feet at its deepest) and diverse, with both largemouth and smallmouth as well as a host of salmonid and panfish species. Most importantly, though, it’s a proven producer of some of the best bass fishing in the Empire State.

The 2022 regular season will wrap up on Mille Lacs Lake, regarded by many as the premier smallmouth fishery in the country. A sprawling, 132,000-acre glacial lake in east central Minnesota, Mille Lacs is familiar water to most of the Bass Pro Tour field, who are itching to experience the fishery in the MLF format.

“It’s been a few years since most of us have fished Mille Lacs,” Bertrand said. “We’ve fished the Great Lakes the past three years, and those (smallmouth) fisheries are great, but Mille Lacs is just different. It’s a unique lake, and the smallmouth fishing is just phenomenal.”