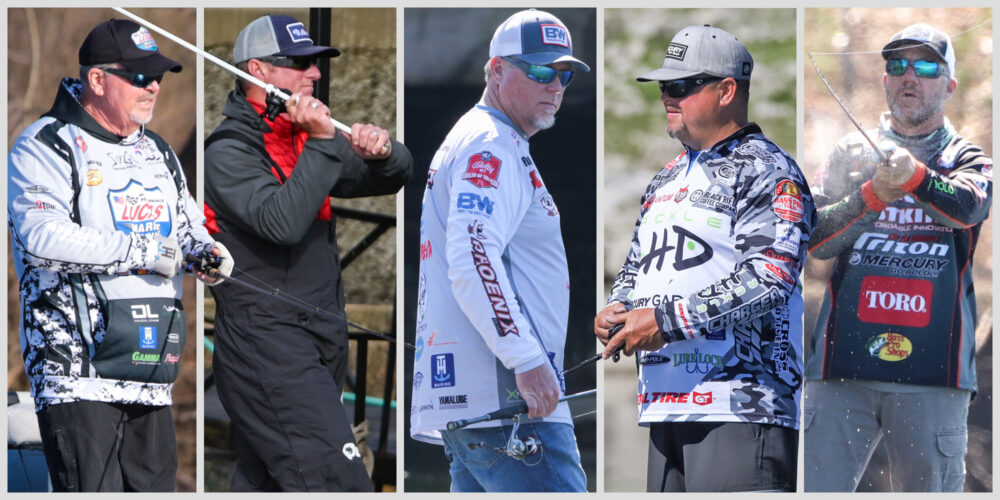 At the top of the standings, Jacob Wheeler, Jordan Lee and the rest of the Top 5 have their eyes on the Bally Bet Angler of the Year hardware and its $100,000 cash reward. Deeper down the AOY standings – in the 30s and 40s – a squad of anglers is arm wrestling for REDCREST and Heavy Hitters qualifications for 2023.

Further down yet – in the mid-60s and 70s – a handful of anglers will enter the final two tournaments of the 2022 regular season with some work to do to requalify for the 2023 Bass Pro Tour.

Per Major League Fishing rules, 10 of the 80 invitations to fish the Bass Pro Tour will be made available annually to anglers who qualify up from the Tackle Warehouse Pro Circuit. The 80-man 2023 BPT roster will be determined by the following criteria:

2). The next five invitations are first offered to anglers with unused exemptions. Exemptions include BPT Angler of the Year titles and REDCREST wins (exemptions can only be used one time in an angler’s career). It appears that no exemptions will be needed for the previous AOYs and REDCREST champions to requalify for 2023.

3). If none of the previous REDCREST or AOY winners need an exemption to qualify for 2023, positions 66 through 70 are determined by either an angler’s career average Bass Pro Tour AOY standings – minus one dropped year for every three consecutive years of competition – or his 2022 Bass Pro Tour AOY standings, whichever is higher. All anglers who have competed in the Bass Pro Tour since 2019 or 2020 are allowed to drop their worst season and use their best two or three AOY results for requalification, depending on which year they started fishing the BPT.

Following the culmination of the 2022 Pro Circuit regular season at Lake Champlain on Monday, Bass Pro Tour anglers Michael Neal, Justin Lucas and Dakota Ebare finished the season in the Pro Circuit Top 10. If they maintain their current Bass Pro Tour AOY standings in the top 65 (Ebare is 11th, Lucas is 21st, Neal is 24th) those three spots will revert back to the existing BPT field to refill, based on career lifetime Bass Pro Tour AOY average.

Timmy Horton (currently inside the AOY cut in 64th) has announced that he’ll retire from tour-level competition after the 2022 season, which would open up one more position for an existing Bass Pro Tour pro.

With two events left and 160 maximum AOY points up for grabs for each competitor, even anglers down in the 70s still have a realistic shot at creating fireworks and climbing above 65th place with an outstanding event (or two). Lane – who finished 46th and 28th in tour-level tournaments at Cayuga in 2014 and 2016 and earned a Top 10 (sixth) at Mille Lacs at the 2017 Bassmaster AOY event – is eager for the opportunity to climb above the 65 spot and finish the regular season strong at two familiar venues.

“I’m real comfortable in the Finger Lakes, I like all those lakes up there,” Lane said. “I’ve had a couple solid tournaments at Cayuga, been in the Top 10 during the event and finished in the money. And Mille Lacs, I’m really just excited to go fish that place again, it’s just such a good fishery. My average fish (in 2017) was a 4 ½-pounder – how many places in the country can you do that? You can catch them power fishing or looking at your electronics, there are several ways to catch them there. I’m looking forward to it.”

“I’m not sweating it, all you can do is keep looking forward and fishing hard, eventually things work out,” said Chapman, who finished seventh at a 2014 Elite Series event at Cayuga. “The season’s not over, I could go have two Top 10 finishes at Cayuga and Mille Lacs and end up in the Top 50.”

“I’ve put myself in a corner, no doubt,” Murray said. “I’ve done pretty poorly all three times I’ve fished Cayuga, it’s not a strength lake for me. I’ve never been to Mille Lacs, didn’t pre-practice, so all I can do is show up and catch ‘em. It’s pretty black-and-white; if I go up there and catch ‘em, I’m good. If I don’t catch ‘em, it’s down to the Pro Circuit. You just have to catch ‘em, that’s all there is to it.”