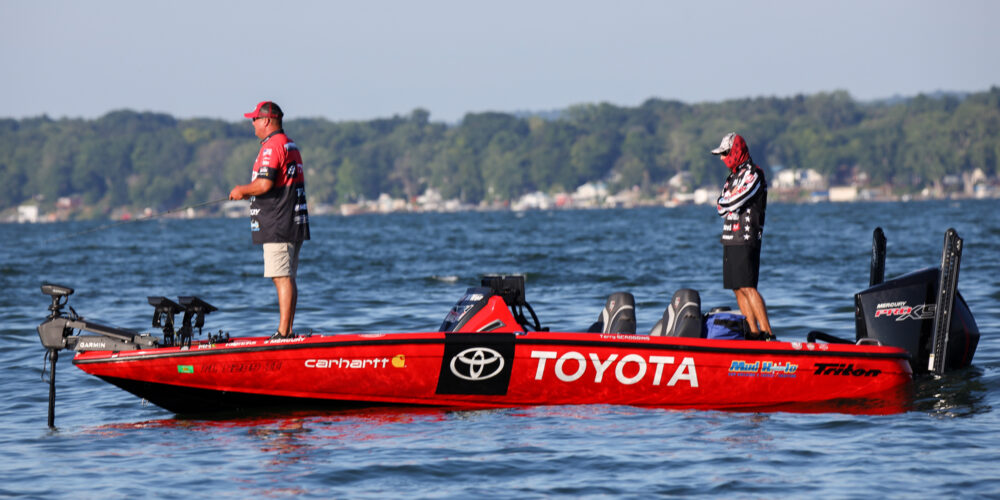 UNION SPRINGS, N.Y. – After five days of fishing that would cause even the most curmudgeonly bass angler to slap an “I Heart NY” sticker on their boat trailer, the Championship Round of Fox Rent A Car Stage Six Presented by Googan Baits brims with storylines and intrigue. Here are some stories to pay close attention to Thursday when the final 10 anglers tackle Cayuga Lake for the next-to-last championship day of the 2022 Bass Pro Tour season.

With 82 pounds, 2 ounces on 22 smallmouth in Wednesday’s Knockout Round, Googan Baits pro Dustin Connell would be a natural favorite on the final day based on his numbers alone. Connell racked up 88-5 on his first qualifying day and 118-11 in his group’s two-day competition, putting his three-day total at a stout 207-0. But as good as the 2021 REDCREST champion’s stat line looks for Cayuga, Connell’s confidence in his evolving pattern and spots is maybe just as notable.

Shortly after catching his first two fish of the Knockout Round – a 3-14 nd a 4-5 – Connell chuckled to himself, shook his head and said “Man, I’ll tell you, this is a pretty special place. And we figured out a pretty special deal.”

He would go on to add 10 more fish by the end of Period 1, finishing the period with 12 fish for 43-11. Connell did that while moving around to different locations, hinting that has multiple productive spots and a pattern that could have his confidence at a high in Thursday’s Championship Round.

Wheeler Building Space in the AOY

Jacob Wheeler started the week with a 38-point lead over Jordan Lee in the race for the Bally Bet Angler of the Year trophy, and as he fishes his seventh Championship Round in eight BPT events this year (including REDCREST and Heavy Hitters), the defending AOY will pick up a minimum of 17 points over Lee, who finished 27th in the Knockout Round.

Wheeler’s performance in 2022 has been one of the most impressive in the history of the sport, but he has yet to win an event this season. It would be foolish to bet against him in Thursday’s Championship Round based on percentages alone: Wheeler has won 21% of the regular-season Bass Pro Tour events he’s competed in, so six events into the 2022 schedule, his odds of winning are pretty appealing.

Toyota pro Terry Scroggins has spent the majority of his week on Cayuga Lake doggedly throwing a bladed jig, jig and drop-shot to the grass patches and scattered rock around Frontenac Island, visible from tournament takeoff at Frontenac Park. Scroggins was “steady Eddie” on Day 1, plucking 23 largemouth for 65-5 from around the island, and then repeated that day-long consistency in the Knockout Round with 24 fish for 72-5.

Entering his first Bass Pro Tour Championship Round, Scroggins’ dedication to his area could be a major difference-maker if his island holds up for another day (and there’s no reason to believe it won’t).

Fans can catch all the action of the Stage Six Championship round on MLF NOW! beginning at 7:45 a.m. ET.