DeFoe Does It Again, Claims Stage Three Trophy on the Harris Chain 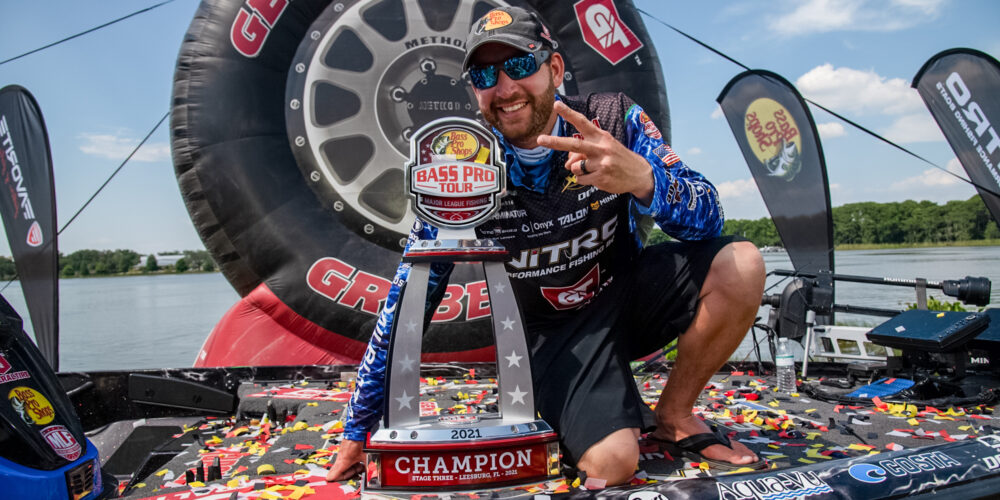 LEESBURG, Fla. – A couple of months ago, Ott DeFoe won the first event of the 2021 Bass Pro Tour season on Sam Rayburn Reservoir. On Wednesday, DeFoe won his second event of the season and his third overall with a dominating performance in the Championship Round of the Favorite Fishing Stage Three Presented by Bass Cat Boats on the Harris Chain. The Tennessee pro used a barrage of scorable bass in Period 3 to pull away from the rest of the field, securing yet another Bass Pro Tour trophy and $100,000.

DeFoe began the third period on Lake Harris in a battle with Brent Chapman, Andy Montgomery and Bobby Lane for the top spot on SCORETRACKER®. He mentioned to his camera before the final period started that whoever caught the most fish in Period 3 would walk out the champion. Well, it turns out it was DeFoe after he caught more than 28 pounds in the final frame, extending his lead to 27-1 over Bobby Lane (which is an MLF record for largest margin of victory in a Bass Pro Tour event).

“I’m really just speechless right now and I give all the glory to God,” DeFoe said moments after lines out. “I really struggled my first day of this tournament on Lake Griffin and struggled so much that it made me go to Lake Harris the rest of the tournament. That decision paid off big time, obviously.”

DeFoe finished his day with 30 bass for 73-14, which he caught mainly on a Rapala OG Slim crankbait or a prototype swim jig that has yet to be released to the public. Focusing on the shad spawn, DeFoe was able to hammer those Lake Harris largemouth while leaving the rest of the field fighting for second place. The Tennessee pro is now the only angler to win two Bass Pro Tour Stages in the same season.

“I was confident coming into today but I really didn’t think I had a shot at winning,” DeFoe said. “With Brett Hite catching 80-something pounds in his Qualifying Rounds and Bobby Lane who knows everything about the Harris Chain already getting a day off, I thought those two would be tough to beat. Also, I knew my main stretch of fish had really been beaten on this week, so I knew it would be tough. Luckily, it all worked out.”

“Another turn at being a bridesmaid,” Bobby Lane said jokingly after finishing in second place to Ott DeFoe. “Nobody was beating Ott in that third period, he put on a show.”

Lane adds another runner-up finish to his 2021 resume after finishing in second to Jacob Wheeler at Stage Two on Lake Travis. It wasn’t quite as close his time around, but Lane was able to catch two key fish in the final few minutes to move up from fourth place to second, earning him more money and valuable points towards his Angler of the Year campaign.

“I had 20 bites flipping grass in a matter of 30 minutes towards the end of the day,” Lane said. “To add a 2-pounder and then a 4-2 to end it and move into second place is just a great way to end it. I love the Harris Chain and I love Florida fishing. It was a great week and I’m looking forward to Lake Chickamauga in just a few days.”

Lane entered Stage Three leading in the Angler of the Year standings and will leave the Harris Chain leading in the standings as well. He leads Brent Chapman—the man he knocked into third place in the final minute—by nine points and DeFoe by 10 points heading into Stage Four at Lake Chickamauga.

Top Marks and Notes from the Championship Round