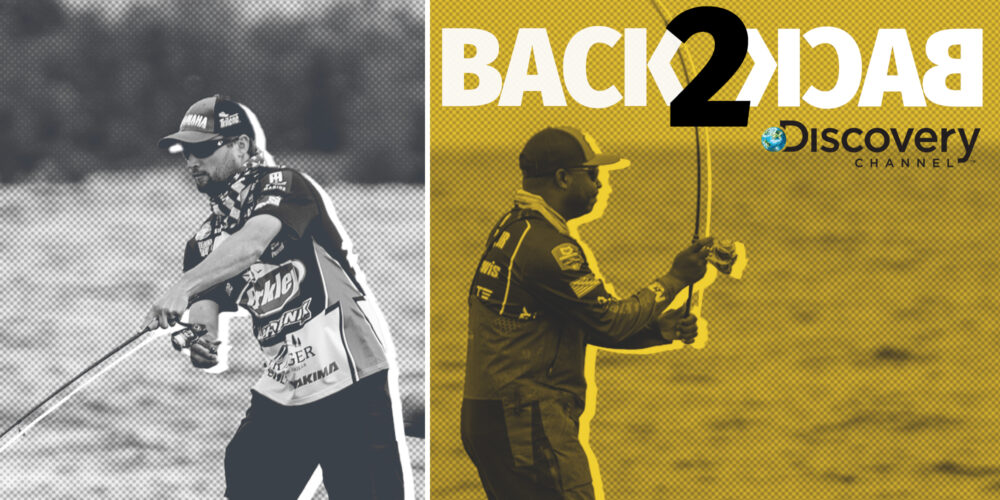 Discovery viewers, brace yourself: you’re about to witness two of the most compelling, competitive days of smallmouth fishing that any television audience has ever seen.

When you turn on your TV on Saturday morning (7-9 a.m. EDT) for the regularly scheduled premiere of Major League Fishing’s Bass Pro Tour on Discovery, you’ll be treated to a steady stream of 4-pound smallmouth, and a nail-biter of a final hour as 38 anglers scramble to finish in the top eight of the Stage Five Knockout Round at Sturgeon Bay, Wisconsin.

The next morning – Sunday, Oct. 4 (also 7-9 a.m. EDT) – Discovery viewers will be on the boat with Justin Lucas as he battles it out with Mark Daniels Jr. and Josh Bertrand in the premiere of the Stage Five Championship Round.

This weekend’s schedule of “back-to-back” Saturday/Sunday premieres on Discovery represent the first time in the two-year run on the network that Major League Fishing fans will see two original episodes of the Bass Pro Tour on the same weekend. The fact that it’s the Knockout and Championship rounds of Stage Five Sturgeon Bay – one of the most prolific smallmouth-catching competitions in history – makes it that much sweeter.

If you’ve been following the recent month of Discovery Saturday-morning premieres, you’re already aware that Green Bay, Sturgeon Bay and nearby waters have produced some phenomenal smallmouth fishing:

What to Watch for – Saturday Knockout Round

Those of you who watched the Stage Five Knockout Round go down live on the MLF NOW! live stream when the competition took place in July already know about the drama that will unfold on Saturday.  Without giving too much away to new viewers to the Bass Pro Tour on Discovery, Saturday’s Knockout Round episode can best be compared to an all-out sprint over the final 100 yards of a four-lap mile.

We’ll sum it up thusly: four anglers will finish within 1-1 of each other around the Elimination Line, leading to some of the most tense final-hour moments we’ve seen in the two-year run of the show.

What to Watch for – Sunday Championship Round

All week long during Stage Five competition, Lucas had an air about him: short-spoken and focused, the Alabama pro seemed like a man on a mission. After dominating his qualifying rounds and advancing straight to the finals, Lucas entered the Championship Round with two days off – considering the highly nomadic nature of Great Lake smallmouth, that could’ve been a problem for Lucas.

Could’ve been. Tune in Sunday morning to find out how his day played out.

All About Stage Five

If you’d like to rewind the rest of the Stage Five story, spend some time on the individual Stage Five event page, where you’ll find immersive coverage of the competition, from “lines in” on Day 1 to “lines out” on Lucas’ championship run.