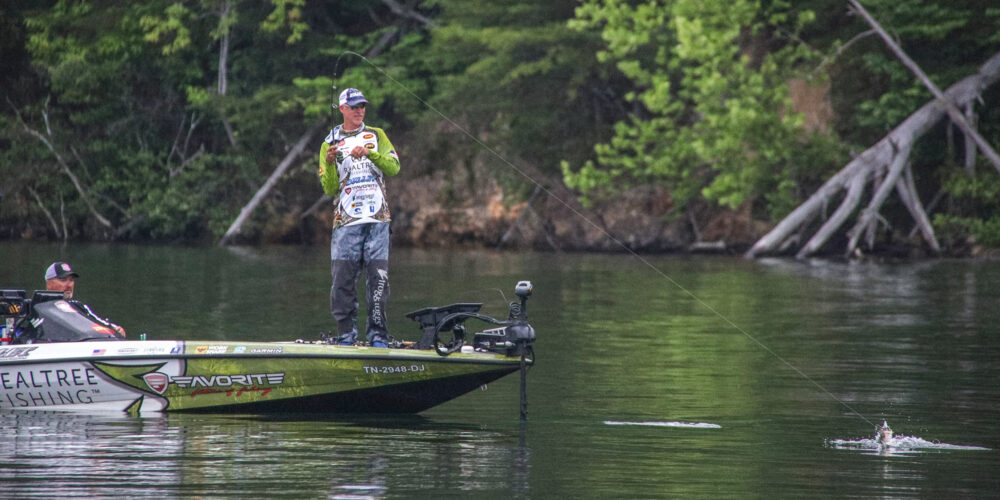 DAYTON, Tenn. – As Group A wrapped up its second day of fishing at Stage Four on Lake Chickamauga, we witnessed some impressive catch totals, big rallies and clutch catches at the end of the day.

One of the more impressive performances of the entire season was by ledge-fishing expert Jason Lambert with his 109 pounds, 13 ounce total over two days. Lambert beat second-place angler Russ Lane by 32-1 and will advance straight to the Championship Round.

Aside from the fireworks at the top, there were plenty of other exciting storylines, including these five key things from the day.

From Finesse to Long-Lining Crankbaits

Multiple different patterns have emerged over three days on Chickamauga. Anglers are using standard TVA ledge-fishing offerings like big crankbaits and jigs to catch bass. Those two baits have been heavily represented, but there was a definite finesse theme on Sunday.

Spinning rods were a frequent sight, and light-line techniques like the Neko rig, drop-shot and shaky head caught plenty of big fish.

A handful of anglers long-lined to get their baits deeper, and for longer periods of time. The tactic requires anglers to let large amounts of line off their reels while using the trolling motor to move away from the bait. From there, they can retrieve their baits.

It’s a painstaking process that takes time to line up a cast and nearly as much time to reel. Some anglers are finding that it’s time well spent, as the techniques produced some good fish on Day 3.

However, Lane failed to advance to the Knockout Round this week after finishing 27th in Group A. That will shake up the AOY race on the Bass Pro Tour after this tournament concludes.

Coming into this event, Brent Chapman sits in second, Ott DeFoe in third and Gerald Spohrer in fourth. Chapman is in 30th place in Group B after their first day of fishing and will need to advance to the Knockout Round if he hopes to take over the points lead.

DeFoe, who has already won twice this year, finished in 10th in Group A and will advance to the Knockout Round. Spohrer has been eliminated, finishing 21st in his group, just 7 ounces below the Toro Cut Line.

DeFoe is in prime position to take over the points lead, barring a big comeback by Chapman tomorrow.

As with all cut days on the Bass Pro Tour, some anglers falter while others rally to take their place and advance. Sunday was no different as five anglers jumped into the top 20: Zack Birge, Luke Clausen, Ish Monroe, Mark Davis, and Anthony Gagliardi will advance to the Knockout Round after starting the day below 20th place.

All of their days were exceptional, but Mark Davis‘ story stood out as he came out of nowhere with a late rally.

Davis landed just two bass for 6-4 his first qualifying day, and sat on one fish for much of the day before catching three during the noon hour. But from there, Davis went to work, catching two in the 1 o’clock hour and six in the final hour. The B&W Trailer Hitches pro ended the day with 12 bass for 34-4 to move into 17th to advance to the Knockout Round.

It seems like whatever the variable weight is, there are fish that come up just 1 ounce short. It happens in every tournament at every level, even when inches are the measurement to determine a legal catch. But Stage Four seems to have even more than usual.

In a game where every ounce counts, plenty of bass are just a shad in their bellies shy of becoming scorable. As tight as the weights have been around the Toro Cut Line, those close calls have made a big difference.

This week four Tackle Warehouse Pro Circuit anglers are in the field. So far, only one has advanced as Matt Becker finished the day in 16th place in Group A. Evan Barnes finished in 40th place with two bass for 4-2 and has been eliminated from competition.

Tai Au and David Williams hope to rally Monday as they sit in 36th and 40th place in Group B after one qualifying day.