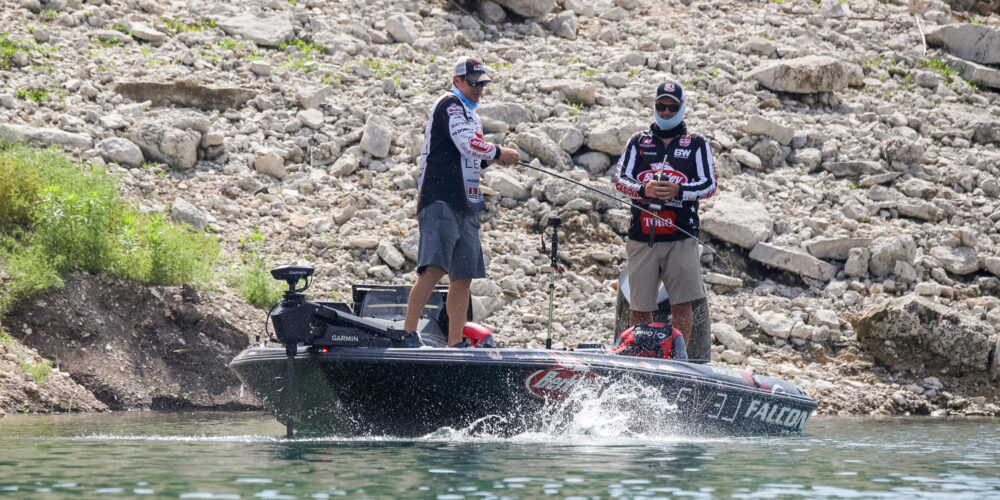 Anthony Gagliardi is one of the 38 pros will will fish Tuesday's Knockout Round on Lake Travis. Photo by Phoenix Moore. Angler: Anthony Gagliardi.
May 3, 2021 • Tyler Brinks • Bass Pro Tour

AUSTIN, Texas – As Group B returned to Lake Travis at the Berkley Stage Two Presented by Mercury, it was a day filled with fish catches and plenty of heartbreaks.

There was plenty of drama on the Toro Cut Line with some clutch last-minute catches. If the previous two days are any indication of how Lake Travis will continue to fish, Tuesday’s Knockout Round should be just as entertaining and closely contested.

Zebra Mussels Continue to be a Factor

Fishing lines have advanced so much in recent years that breaking off fish is not nearly the issue that it was years ago. Of course, bass anglers still break fish off, but nothing like we are seeing this week on Lake Travis.

The lake’s abundant zebra mussels are the main culprit, and the amount of lost fish through the first four days of competition due to line scraping on the mussels has been too numerous to count. Line breaks have already affected the event and their impact will continue to be felt during the final two rounds.

While anglers struggled on Monday to catch bass bigger than the 1-pound, 8-ounce variable minimum weight, fish are still biting. The catches are dominated by bass between 1 and 3 pounds, but a few kickers have shown up on Lake Travis. Those bigger fish in the 4-pound plus range have been difference makers.

One shining example of the importance of big fish happened in the last 30 minutes of the day. Out of seemingly nowhere, Dave Lefebre rocketed into the top 20 with a 7-pound, 4-ounce bass.

He ended the day in 20th place with 21-6 on just seven bass over two days.

That fish was solely responsible for his entry into the Knockout Round and highlighted the importance of a big bass this week on Lake Travis.

The Hawk Has Landed

Arizona’s Roy Hawk has struggled mightily on the Bass Pro Tour, and he’ll be the first one to tell you that. After dominating the West and finding success during his brief Bassmaster Elite Series career, his results with Major League Fishing have been a mystery.

But Hawk has qualified for his first-ever Knockout Round, ending Monday’s round in 17th with 22-8 over two days.

Even during his disappointing first two years on the Bass Pro Tour, the Arizona pro has continued to clean up in the desert Southwest team tournament scene. The lakes he fishes there have many similarities to Lake Travis, and he could easily advance to the Championship Round this week.

Now four days into the event, the fishing quality shows a steady decline. So far, each of the days has been unique varying weather conditions, differing levels of boat traffic and runoff from rains.

All of these factors have impacted the bite one way or another, but the numbers show that the fishing is getting tougher.

Tomorrow, the top anglers from both groups will combine and won’t leave anything on the table as they attempt to make the Championship Round. The remaining anglers have also proven they’re around fish virtually all day long, so if there’s any chance that the fishing improves, it’ll be during the Knockout Round.

It’s way too early to start talking about the race for the Angler of the Year title, but after two events, the field will be set for the first 2022 MLF Cup event to be filmed this fall.

The top 24 anglers after Stage One and Stage Two will be invited to that event. We’ll know for sure who the anglers will be after the conclusion this week, but some early looks at the finishes so far show some surprises.

Two anglers who won’t be at that first Cup event are Bryan Thrift and Jordan Lee, who missed the cut here at Lake Travis after uncharacteristically low finishes at Sam Rayburn as well.