Five Key Things in the Knockout Round on Lake Travis 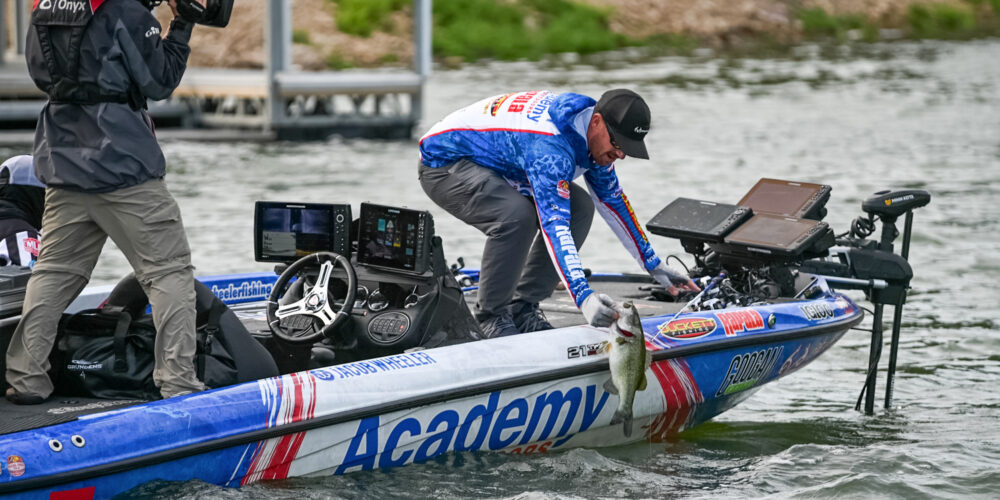 Jacob Wheeler has been on a higher grade of fish most of the week on Lake Travis. Photo by Garrick Dixon. Angler: Jacob Wheeler.
May 4, 2021 • Tyler Brinks • Bass Pro Tour

AUSTIN, Texas – The Knockout Round at the Berkley Stage Two Presented by Mercury on Lake Travis certainly lived up to the name, as anglers delivered knockout punches late in the day. Some anglers punched their way into the Championship Round, others were TKO’d.

Here are five key things from today’s Knockout Round.

With a large population of non-scorable bass and some barely big enough, many anglers have struggled to add meaningful weight on SCORETRACKER®. The average size of fish for the anglers remaining in the Top 10 is hovering right around 2 pounds per fish, but a pair of anglers advanced with a much higher average per fish.

Stephen Browning landed just six bass on the day for 17 pounds, 3 ounces, helped by today’s Berkley Big Bass at 6-3. He ended up seventh on the day to advance, thanks to his kicker bass this afternoon.

Jacob Wheeler has been on the big bass bite all week long. Wheeler led for a good portion of the day after a solid first period. His final day tally was 24-11 on just seven bass.

Wheeler has maintained an average close to this all three days he’s fished, and it’s clear that he’s on a much better grade of fish than the rest of the field. For comparison, Knockout Round winner Bobby Lane doubled Wheeler’s catch count with 14 bass for 28-1.

If Wheeler can catch enough bass and maintain that average during the Championship Round, he has a chance to win a Bass Pro Tour event in the third straight season. If not, the winner might be the one who simply catches the most scorable bass.

Throughout the four days so far, the fish have been biting the best in two windows. The morning bite has been critical for some anglers, but other anglers are having success with the sun shining.

The first hour of the day has been vital for many anglers as they chase active fish feeding on spawning shad or schooling in the marinas. As the day progresses, the deep water and dock bites have picked up.

Throughout the event, there has been a mid-morning lull before things pick up again midday, and another stall until the end of Period 3. Few anglers have been able to keep the bite going all day long, and if an angler can figure that out, they have the chance to be the Lake Travis champion.

It’s been an array of different tactics catching fish. Even among the 10 anglers remaining, there are few similarities in what they’re using. They’re also fishing from one end of the lake to another.

Some are sight fishing and some are fishing moving baits. Others are capitalizing on the shad spawn and some are sticking with finesse tactics. There’s no real clear leading pattern this week and it’s anyone’s guess as to how the eventual winner will catch his fish.

Over the first four days of the event, the total catch numbers have been on a decline. The first three days were relatively similar, before a significant drop yesterday. Today, the number improved even with 202 scorable bass as opposed to 162 yesterday with two more anglers in the field.

The remaining 10 anglers have things dialed in and know what is working here on Lake Travis. Today’s increase in fish caught show that there are still plenty of bass willing to bite.

Cox Makes an Appearance in the Championship Round

Florida’s John Cox has made his first Bass Pro Tour Championship Round in just his second event. He’s hung around the top 10 all week long and flew under the radar a little, finishing 10th after his first competition day and ninth to close out the Qualifying Round to qualify for today’s Knockout Round.

He hovered in the middle of the pack for much of the day before catching two bass in the last half hour to climb into the top eight. Cox finished in eighth on the day with nine bass for 16-10.

With weights starting over, his chance of winning is as good as any remaining angler and he’s in prime position to shoot for the win.