Five Key Things on Day 2 on the Harris Chain 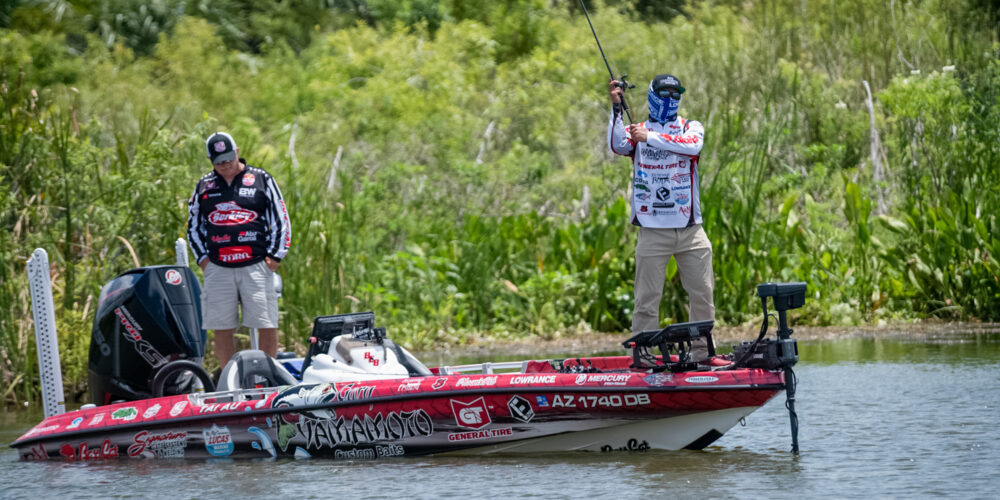 LEESBURG, Fla. – Group B had its turn at the Harris Chain of Lakes on Saturday for their Qualifying Day 1 of the Favorite Fishing Stage Three Presented by Bass Cat Boats. While no angler had a day quite like Brett Hite did on Day 1, there were still plenty of fireworks.

For those looking to compare it to a five-fish tournament, Lane’s 26-5 for his best five showed that he’s on both quality and quantity to start the event (which is only 65 miles from his hometown of Lakeland, Florida).

Lane’s round was a major story today, as were a few trends we picked up on. Here are the five key things from the day.

Lane Stays on the Roll

Lane was leading the Angler of the Year race after two events coming into the week: He finished in the Top 10 at both Sam Rayburn and Lake Travis, and returned home to Florida with another fantastic day to start Stage Three.

Barring any significant changes in the standings, Lane is well on his way to securing another Top-10 finish if he can win his group and advance straight to the Championship Round. He’s also having an excellent start to the Tackle Warehouse Pro Circuit season, sitting in fourth in AOY standings after four events.

Lane is on a major roll right now and has plenty of momentum as he goes into the second Qualifying Day with a lead of 24 pounds over second-place angler David Walker.

No Practice (or Rest) Needed for Cox

John Cox was fishing a Bassmaster Elite Series event on Lake Guntersville in Alabama on Friday. He made the cut in 33rd place, cashed a check, and headed southbound to compete in his home state.

Cox arrived in Leesburg early Saturday morning after an 8-hour haul from Guntersville. Cox was understandably one of the last to launch on Day 2, and with no practice, he’s right in the mix of things in seventh place with seven bass for 28-2.

Cox’s group has a day off tomorrow, so he can sleep as much as he wants to. That should have the rest of the field worried, as a fully-rested John Cox will be even more of a threat.

It seems like every event so far this year, Fletcher Shryock has found a huge bass. He’s had some big bites this season, including a 9-4 at Heavy Hitters and an 8-4 at the Lake Travis event. Both were impressive, but his big one at Travis came on a lake where many anglers cycled through countless bass just to find on over 1-8.

Shryock was at it again on Saturday with an 8-6 that was the Berkley Big Bass of the day. Whatever he’s doing to create the big-bass mojo, it’s working as he has had a knack for finding the big bite lately.

It has been a continued resurgence of sorts for veteran pro Mark Davis. The Hall of Famer ended the day with 14 bass for 36-1 to put him in fourth place in Group B. The top of the standings is somewhere he’s been quite often this year, including a 10th at REDCREST and sixth at Stage One on Sam Rayburn.

Davis is also doing well this season by slowing down with some “old school” techniques such as the Carolina rig in the day and age of “video game fishing” with forward-facing sonar units, and anglers quickly covering water with vibrating jigs.

In Group A’s start to the tournament, Tackle Warehouse Pro Circuit angler Kyle Hall settled into the 11th spot with 13 bass for 26-6. Hall is in good shape to advance to the Knockout Round if he can catch them again on Sunday.

On Day 2, Arizona’s Tai Au is on the right side of the Toro Cut Line: His eight bass for 21 pounds has him sitting in 13th place. One more solid day and he’ll also earn a berth into the Knockout Round.

At least one Pro Circuit angler has advanced to the Knockout Round in every Bass Pro Tour event so far in 2021, but none have appeared in a Championship Round. Spencer Shuffield has the highest Pro Circuit finish so far, with his 11th place showing at Sam Rayburn. Miles Burghoff was the best of the bunch at Lake Travis, finishing 30th.