Fukae’s Success at Table Rock: A Drop-Shot Clinic That You Can Learn From 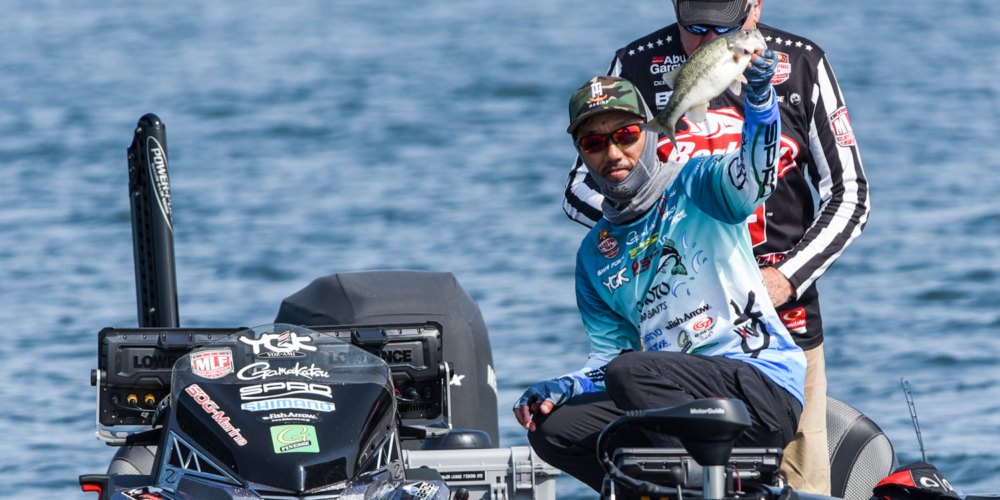 Shin Fukae's mastery of the drop-shot propelled him to over 112 pounds in one round at Table Rock Lake. Photo by Garrick Dixon
June 17, 2019 • Tyler Brinks • Bass Pro Tour

At every Bass Pro Tour event, somebody has to finish 11th and miss the Championship Round. At the most recent event – Stage Seven on Table Rock Lake – it was Shin Fukae. Just as was the case at Stage Two on Lake Conroe, when Fukae was eliminated as time expired, Adrian Avena nudged the Mercury pro in the closing minutes on Table Rock Lake.

During the MLF NOW! broadcast after time expired, Fukae exclaimed “The ‘Jersey Boy’ beat me again!” in reference to Avena securing a spot in this year’s Bassmaster Classic after beating out Shin in a bracket-style event last fall.

With this much hard luck, you’d understand if Fukae started complaining, but that was not the case, and he sees the positives for having defeated a good portion of the field.

Let’s not just focus on Fukae’s close calls and instead, take a further look at how he was able to best the majority of the anglers during Stage Seven of the Bass Pro Tour.

How He Tackled Table Rock

Fukae is known for his prowess with light line and spinning gear, and he showcased that at Table Rock when he caught 112 pounds, 4 ounces during the Shotgun Round. If not for Jacob Wheeler’s monster day, that would have been the best-ever day in the inaugural season of the Bass Pro Tour.

The most significant player for Fukae was the drop-shot rig, but he also mixed in small swimbaits, blade baits, tail spinners, and a spoon.

During the Stage Seven Shotgun Round, Fukae fished close to Table Rock dam, but his primary spot was near the convergence of the White and James rivers, and that carried him through the rest of the week.

Fukae described his main spot as a flat hump that came up to 30 feet of water and was surrounded by depths of over 100 feet.

“It was a circle that was approximately 150 feet across,” he said. “The fish would move across it, and I spent time watching my Lowrance electronics to locate them. I found three schools there and they were sitting in 25 to 30 feet of water.”

Where many anglers found fish busting near the surface, it was not the case for Fukae as heavy boat traffic in an open area prevented bass from surfacing.

Fukae utilized his traditional 2D sonar, DownScan as well as StructureScan to look toward each side. Many bass anglers only view the side-scanning sonar from the transom, but he has mounted a Lowrance TotalScan Skimmer Transducer to his trolling motor.

“My Lowrance electronics were one of the biggest things for me (on Table Rock),” Fukae said.

As mentioned, the drop-shot was the deal, but if the fish stopped biting, he would rotate through the other baits to entice more bites.

This is a technique that originated in Fukae’s home country, and he is one of the best in the world when it comes to the technique. For this event, he had two setups for a drop-shot: one for open water and one for fishing around the submerged brush.

The Gary Yamamoto Custom Baits 4-inch Kut Tail Worm was his choice, and he used both a green pumpkin and a custom Morning Dawn shade that Yamamoto makes especially for the Ozarks region. Fukae said this color is available in Kimberling City.

Most braided lines float, so what he was using is relatively unique, and he credited it for some of his success this week.

“It allows the bait to sink much faster and you do not get as much slack in your line. This was important in the boat wakes and wind I was fishing in,” he shared.

Weight size was another factor, and he rotated between ¼- and ½-ounce Fish Arrow tungsten drop-shot weights.

“I used the ¼-ounce when the fish were suspended, and I was swimming the bait more, and the ½-ounce when I saw them on my Lowrance units and needed it to fall quickly,” added Fukae.

When fishing around the submerged brush, he mainly utilized the same gear, but bumped it up to a 7-2 medium heavy rod of the same make and would Texas-rig the bait instead. He chose a 2/0 Gamakatsu G-Finesse Swivel Shot Worm Hook.

With Fukae either near the top or hovering around the cutline at Stage Seven, fishing fans were able to get an up-close look at one of the best in the world putting on a drop-shot clinic.