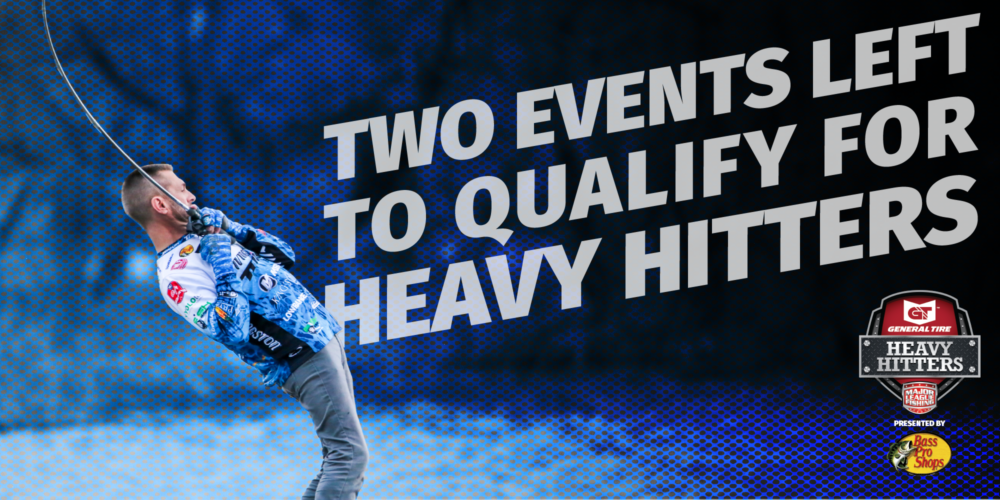 Randy Howell is the man on top of the Heavy Hitters qualification standings with only two events to go in the 2022 Bass Pro Tour season.
August 5, 2022 • Mason Prince • Bass Pro Tour

With only two events remaining in the 2022 Bass Pro Tour season, that means there’s only two more shots for the 80 anglers to secure a spot on the 30-angler roster for Heavy Hitters in 2023. We’ve seen some massive catches this season — including some records broken — but as the pros prepare to make their northern swing through New York and Minnesota, they’ll be searching for the big bites that can get them into the Top 30 in their combined biggest-fish weights, and into Heavy Hitters in 2023.

Randy Howell is on top of the Heavy Hitters qualification standings with his biggest fish from each event totaling 32 pounds, 4 ounces. Howell got a ton of help from the record-setting largemouth he caught during Stage One that weighed in at a whopping 12-14. That bass shattered the Bass Pro Tour record for largest catch by more than a pound.

While his Louisiana Loch Ness Monster out of Bussey Brake is the main reason for his lead, Howell has stayed consistent over the course of the year. A 6-11 in Stage Two, a couple of quality 4-pounders from Stages Three and Four, then a 3-10 on a tough Watts Bar Lake has Howell firmly in the lead and all but locked in for Heavy Hitters next year.

There have been three installments of the one-of-its-kind Heavy Hitters event, with 2023 being the fourth. There’s been a different champion every year – Jordan Lee in 2020, Alton Jones in 2021, Ott DeFoe in 2022 – but Lee and Jones are doing their best to prevent a new name from claiming the 2023 belt. Jones currently sits second in Heavy Hitters standings, with his five biggest bass weighing in at 31-11. As for Lee, put him down for 27-9, good enough for 11th place.

Jones struggled in Stage Three, only managing a 2-8 for his largest bass of the event. However, when you catch a 9-pounder at Stage One and an 11-pounder at Stage Two, that can give you a little wiggle room for an off event.

Lee’s biggest bass came at Stage One with his 8-2. The interesting fact about Lee – the rest of his biggest bass are all over 4-7. That average is what’s keeping Lee squarely in position toward the middle of the pack.

Close Near the Qualification Line

Heading into Stage Six, Todd Faircloth is the last man inside the Top 30 of Heavy Hitters qualification with 23-8. After beginning his season with just a 4-7 at Stage One, Faircloth has fought back with a 6-10 and a 4-12 over the past four events to push himself up the standings.

Interestingly enough, we have a four-way tie at 23-8 between 27th-place Alton Jones Jr., Mark Davis, Britt Myers and 30th-place Faircloth. What’s the tiebreaker? That would be biggest bass caught overall in the 2022 season. Jones takes the top spot thanks to his 8-14 from Stage Two, Davis also has a 7-pounder to his name. Myers has the edge over Faircloth by the narrowest of margins: 1 ounce.

Other anglers outside the Top 30 but very much in the hunt include 31st-place Cody Meyer (2 ounces back), Andy Montgomery (3 ounces back) and Wesley Strader (4 ounces back). In all, there are eight anglers within 1 pound of Faircloth for the final spot in the Top 30.

There are only two events left in the Bass Pro Tour season for these anglers to make their moves. How will the standings shake up once the dust settles at Cayuga Lake in August and Mille Lacs in September? We’ll find out soon enough.

–Justin Lucas has done some serious climbing in the standings. The Alabama pro started the season with a 1-11 big fish at Stage One, which put him 78th in Heavy Hitters qualification. Lucas has since rocketed up to 24th, thanks to a 7-15 at Stage Two, a 6-4 at Stage Three and a 5-5 at Stage Four that pushed him as high as 22nd.

–Bradley Roy has had a banner year in 2022, earning his first-ever tour-level title with his win at Stage One and catching an 11-11 at Stage Two on Lake Fork. The Kentucky pro seems to have a nose for big fish, judging by Heavy Hitters standings. He’s currently third with 30-2 and finished seventh in HH 2022 qualifications with 34-9, making him the only pro currently in the Top 10 with a previous Top 10 Heavy Hitters season.

–Randall Tharp has made it clear since he joined the Bass Pro Tour that catching big fish was going to remain his focus. His performance over the past three-plus years has backed up his words. Tharp qualified for HH in 2022 and looks to make it back-to-back years in 2023. He currently sits sixth in the standings with 28-12 with a 7-10, 6-7, 5-9 and 5-7 to his name in 2022.