JACOB WHEELER: My Thoughts on Forward-Facing Sonar (Part 2 of 2) 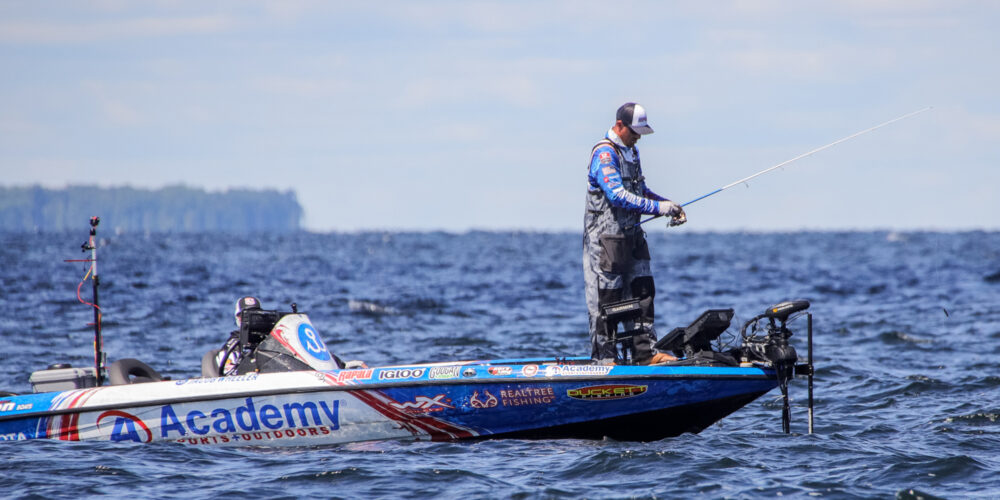 Jacob Wheeler’s key to success with forward-facing sonar is to connect the dots, not chase them. Photo by Phoenix Moore Photo by Jody White.
February 15, 2021 • Jacob Wheeler • Bass Pro Tour

In Part 1 of this blog, I addressed some of the hype over forward-facing sonar. For the second part, I have some more candid thoughts on this new technology.

The funny thing about all great fishing innovations is they’re a double-edged sword to a certain extent. The thing that makes them such an advantage that adds to your game is also the very thing that can make them a deterrent that takes away from your game.

Some of you might not have had a chance to use forward-facing sonar yet, so I’ll use another amazing fishing innovation that most of you have used as an example: Power-Poles.

I think we can all agree that Power-Poles are one of the greatest fishing innovations of all time. To be able to slow down and pick things apart with the push of a button is a bass angler’s dream come true. But in fishing, there is such a thing as too much of a good thing.

Fishing fast and covering a ton of water per day, especially in practice, is a big deal for me. But sometimes I get to stomping on that Power-Pole button a little too much in practice. Once I’m poled down, it makes it so easy to make a few extra pitches or casts to juicy looking spots. An extra few casts each time eats into the clock. By dark thirty I’m scratching my head, thinking: I didn’t get as far as I wanted to explore today. The reason? I poled down and fished too much – because I could! It’s a fine line of using an advantage too much.

Forward-facing sonar is a very similar thing. Yes, you can see fish out there. Yes, you can cast to them. But guess what? The fish don’t always bite! I speak from experience when I say it can cost you hours of casting at them, only to see them follow your lure back and laugh at you.

You can change lures, change sizes, change actions, change colors –even change the color of the eyeballs if you want! An hour later they still follow your stuff back, snubbing you.

It’s like a bed fish that looks so catchable on tournament day. It’s locked down; it’s rolling on your stuff. You keep thinking: it’s going to bite the next cast! An hour later it swims off and never comes back. Then you realize: If I had just spent the last hour of the day throwing a wacky worm down the bank instead of being snubbed by a big one on bed, I probably could have culled a couple more times and made the cut.

Trust me, the forward-looking silver bullet has done me the same way. When I get so focused trying to catch them off the screen, I lose touch of my overall awareness of time, weather, current, fishing pressure, etc. These are factors my intuition needs to keep a good decision flow going. When I get caught up on the screen, it starves my decision-making process.

Last year at Heavy Hitters on Toho, I just knew I was going to win that event. I was fishing brushpiles in Kissimmee and using forward-facing sonar to look into the piles. Everything went according to plan the first few days and I made the Championship Round. Knowing the final day was a 3-pound minimum, I purposely saved piles with the biggest dots for the last day. I couldn’t sleep the night before; I had seen plenty of big dots I was sure I could catch.

When I returned the final day, those dang dots would not bite!

I caught fish, but nothing over the 3-pound minimum. I casted at big dots over and over – denied! I zeroed on the day for scorable bass! I got so consumed with trying to catch those dots that it bogged down my intuition and locked up my decision flow when those attributes were needed most. I should have relied on my gut and the weather to tell me which piles to throw at – not a screen. That’s not the technology’s fault; it’s my fault for letting it happen. I let it be too much of a good thing and it left me chasing my tail.

Whether the dots bite or not, the thing forward-facing sonar does best is provide a real-time glimpse of the underwater world. It allows me to take an attitude reading of everything going on.

Every little behavior observation is a critical piece of info for the decision-making process. There is a difference between just chasing dots and connecting those dots into understanding what’s going in the bigger picture.