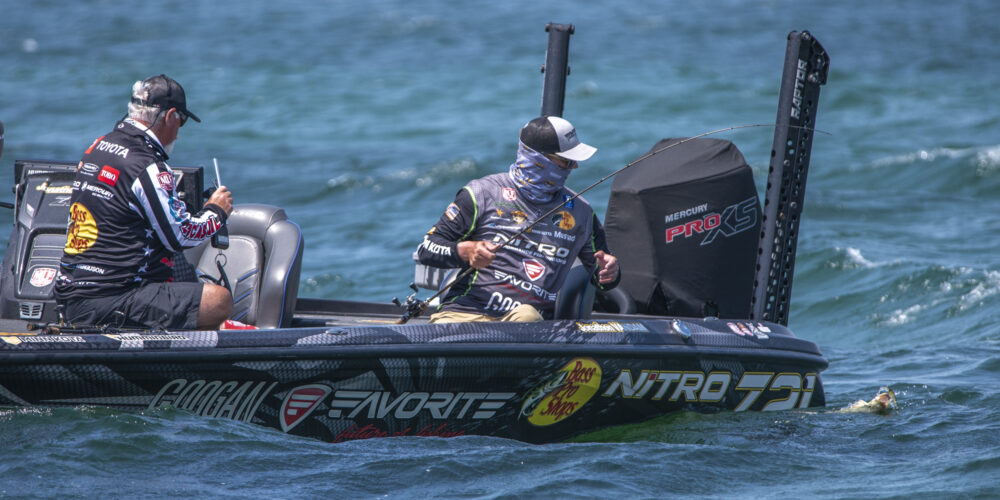 Spinning rods, drop-shot rigs, and bouncing up and down in waves as anglers stare at their electronics define northern smallmouth fishing in the summer. It’s a time-tested way to catch the big smallmouth that live in the Great Lakes.

But it’s hardly the only option.

Noted smallmouth guru Jonathon VanDam will fish that way if he has to, but he’d much rather get shallow and target active fish, often sight-casting to them as they cruise for their next meal.

Most anglers believe that smallmouth fishing in the northern states revolves around deep water, but VanDam says it doesn’t have to be that way.

“It’s a big misconception that all smallmouth are deep and that you have to be fishing a drop-shot offshore,” said the Team Mercury pro. “I fish shallow all year long, whether I am on St. Clair, Erie, or anywhere in the country. It starts in the prespawn and you can do it into the fall because these fish get up shallow, cruise, and hunt.”

VanDam has seen it happen time and time again as fish cruise shallow areas, including at the recent Stage Five on the St. Lawrence River.

“You’ll see single fish or ‘wolf packs’ of three or four fish,” he said. “At the St. Lawrence, I saw a pack of 40 fish in one little shallow, sandy spot. It can be pretty wild sometimes.”

What to Look For

When talking shallow water on northern fisheries, VanDam classifies “shallow” as water less than 7 feet deep. From there, he’s looking for a specific bottom composition before he starts looking for cruising smallies.

“I’m mainly searching for sand or any transition where it goes from rock to sand,” he shared. “I’ll also look for little inside grass edges with rock or sand in front of it. These are areas that the fish can follow back and forth to feed.”

Another critical ingredient is sunshine, and while not a deal-breaker if the sun isn’t shining, VanDam says that a bright, sunny day turns the fish on while also making it easier to spot them.

“The more sun, the better,” he confirmed. “If you can have a little ripple on the water as well, it can be phenomenal – it’s like every fish in the area gets up (shallow) and starts looking around. You can still catch them when it’s cloudy, but it seems like you have to cover more water to find them and they’re not as grouped up.”

When searching for shallow fish, VanDam puts the trolling motor on high and visually scans for visible fish, and then slows down and goes into hunting mode when he sees one.

“You’re stalking these fish and it’s just like guys fishing the saltwater flats,” he said. “Smallmouth are usually pretty easy to see in the sand since a lot of them are really dark-colored. Once I see a fish, I cast ahead of them in the direction they’re heading. Sometimes they eat it right away and other times it takes a few casts to get them to bite.”

VanDam keeps it simple with bait selection, sticking with a drop-shot when it’s calm and throwing jerkbaits, spybaits, and swimbaits in more windy or cloudy conditions.

“The cool thing about doing this is the fish keep coming back to the same areas,” he said. “The good areas reload and you’ll run into new groups of fish every time you come back. If they are there, they’ll most likely bite because they only get shallow like this to feed.”