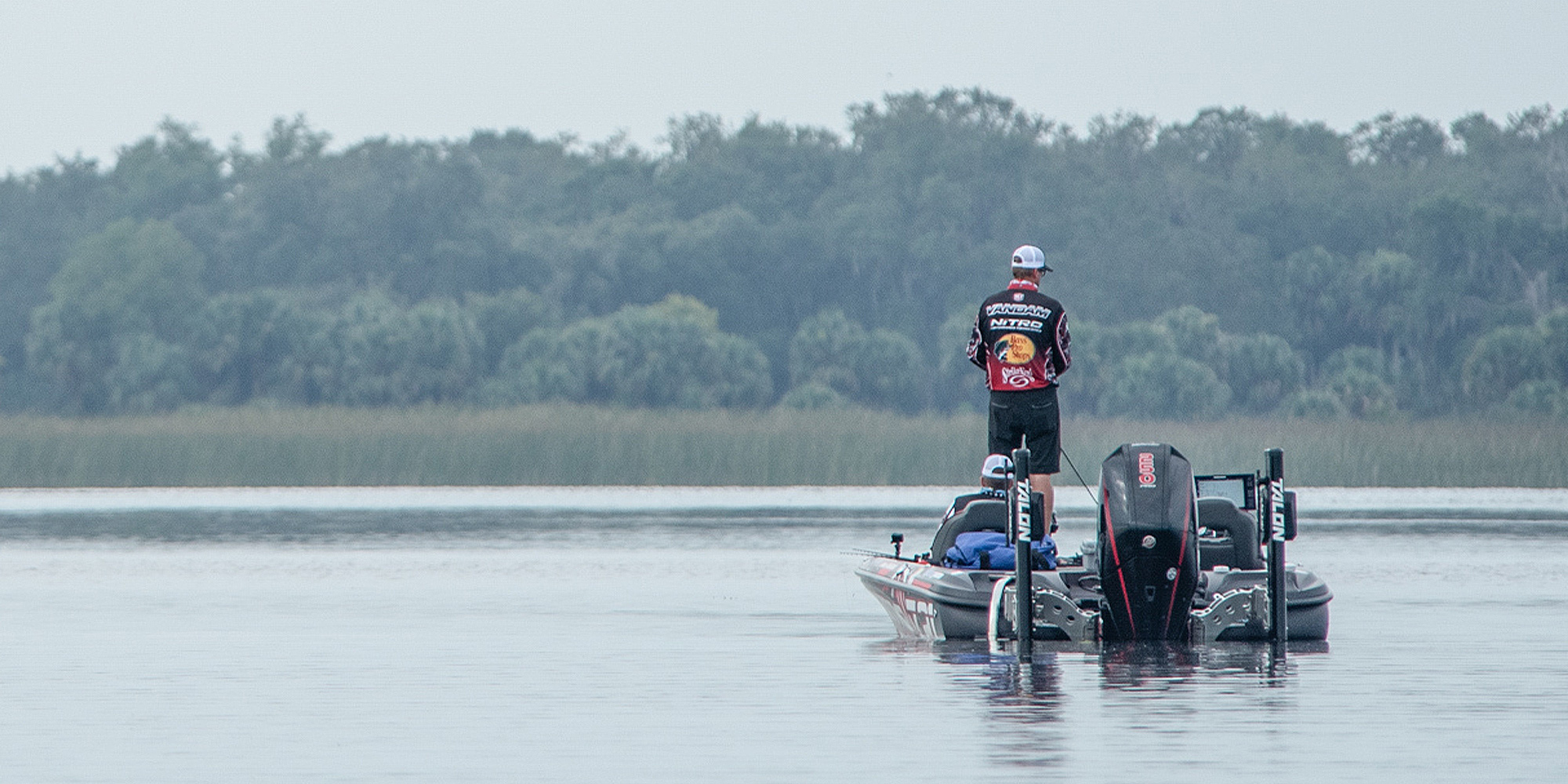 The evolution of shallow water anchors has been a game changer according to Kevin VanDam. Photo by Garrick Dixon

Over my last couple of blogs, I’ve gone back in time and taken a look at how far fishing technology has advanced over the last 30 years, especially in terms of GPS, digital mapping and vast improvements in sonar. This time around I want to address boat control and the modern miracle of fixed-position fishing.

When I started fishing professionally some 30 years ago, boat control while fishing was primarily up to the feet via a foot-controlled trolling motor. If the wind or waves got bad, all you could do was “stand on it” all day to fight the wind. When fishing shallow vegetation in 20 mph winds, the only recourse was to drift with the wind, and maybe use a drift sock, because fighting the wind on the trolling motor resulted in blowing out the fragile shallows with prop wash.

Back in the day, the only way to truly stop to fish was to drop an anchor or stake down with a push pole and tie off to it. Both were noisy, time consuming and usually involved getting mud in your boat.

But at some point in the early 2000s, a boat-positioning miracle arrived. Sight-fishing expert Shaw Grigsby showed up at a tournament on Lake Seminole with a long tube strapped on the back of his boat. We were all asking: “What’s that pole deal on the back of Grigsby’s boat?” When he “activated” it, a fiberglass stick on a mechanical elbow lowered into the water and pierced the bottom to hold his boat in place.

At that time we figured it was strictly a sight-fishing tool.

Man, were we ever wrong about that!

As we all know now, the bass fishing world has never been the same since Power-Pole entered the market with the first shallow water anchor. After that, a shallow water anchor instantly became a must-have for all serious bass anglers – and not just one, but two!

We learned the shallow water anchor was not only a sight-fishing tool, it was a tool for anytime you were fishing water less than 8 to 10 feet. They became a critical tool for holding exactly where you wanted to be – with just a click of a button. We never knew just how many bass a grass patch or a single reed head would hold until we could lock down in fixed position and quietly pick it apart with multiple pitches in a 20 mph wind.

I cannot imagine how many more bass shallow water anchors have helped anglers catch over the years than if they had never been invented.

The advent of the shallow water anchor changed fishing as we knew it forever – and not just in shallow water. Once anglers experienced the magic of locking their boats in a fixed position with the touch of a button, it was only natural that they wanted that same magic in any depth: 20, 30, 50, 100 feet!

With that came the race to “anchor” over deeper waters. Minn Kota designed the Talon to be an electric drive anchor that has models that can hold a boat in 12 to 15 feet of water. But any “shallow water anchor” is always going to be limited by the length of the stake. With that, all eyes turned to the promise of GPS integrated trolling motors to hold a fixed position over any depth of water.

Now granted, GPS trolling motors are nothing new. Minn Kota and other companies have had GPS integrated trolling motors that could hold the boat in a fixed position on its own – or “spot lock” on a waypoint – but they required a hand-held remote control to operate them. With the introduction of the Ultrex several years ago, Minn Kota was the first company to pair a GPS integrated trolling motor with a traditional foot pedal, giving an angler the best of both worlds – foot control and spot lock.

Now trolling motors with foot control and spot lock or “anchor mode” are becoming the standard and their benefits are beyond belief. To push a button and have my trolling motor hold me in one spot while I fish, or fight a fish, or rig another bait is something I never thought I’d see in my lifetime.

Add to that the Ultrex’s electric-assisted power steering and all that “fighting” with the trolling motor is gone! There’s no more torque from big waves or grass. For me, this new technology has reduced the exhaustion factor of fishing in big water by at least 50 or 60 percent. What’s even crazier is having my Ultrex take me – on autopilot – to my next waypoint while I work on tackle, put rods away or even eat a sandwich.

The degree to which this new generation of trolling motors makes an angler more efficient is immeasurable. Once again, it’s one of the many improvements in our sport that allows anglers to make the best use of their time on the water.