Lintner Cruises to Top of Group B On Lake D’Arbonne 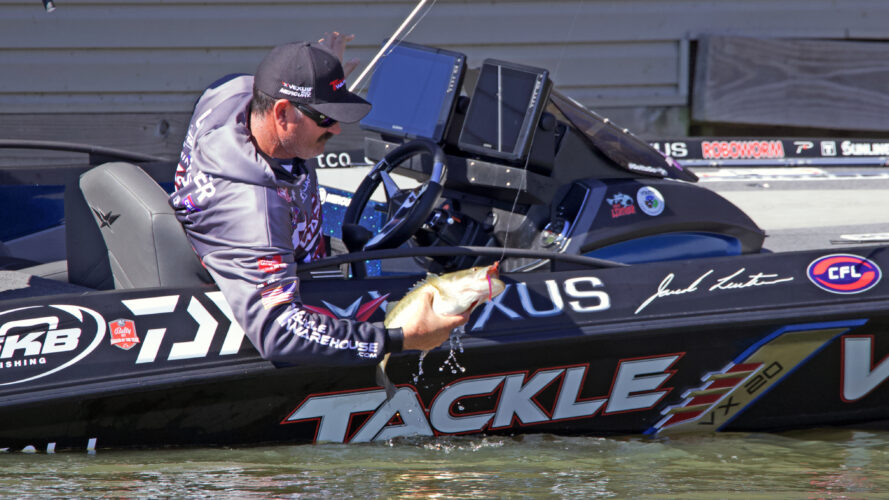 MONROE-WEST MONROE, La. – Day 2 of the B&W Trailer Hitches Stage One Presented by Power-Pole proved to be a lot like Day 1 as Group B took its first shot at Louisiana’s Lake D’Arbonne in the 2022 Bass Pro Tour season opener.

The weather was cold and the fishing was stingy for just about everyone, except those at the top of SCORETRACKER®, including Jared Lintner, who made it look easy with 11 bass for 33 pounds, 2 ounces. That total gave him an impressive lead over second place finisher Gerald Spohrer, who had six bass for 18-11.

Lintner’s cushion of 14-7 over Spohrer was more than the totals for 34 of the 40 anglers, a testament to just how good his day was on a stingy fishery. The fishing proved to be more challenging for Group B as eight anglers failed to score a bass compared to just three yesterday for Group A’s first day on the water.

Twentith place yesterday saw Bobby Lane hold down the Toro Cut Line with 5-9 on the first day. That mark was just 3-15 on Sunday as Britt Myers occupies that position.

But the day belonged to Lintner, the longtime California pro who recently moved to Covington, Georgia.

It was 10:21 a.m. when Linter put his first fish in the boat, but it was pretty steady from then on. He thoroughly enjoyed the day, especially after a challenging practice.

“There’s always someone who figures out how to catch them, no matter what the conditions are and it was me today,” he said on MLF NOW! “Fishing is fun and today was a really fun day. This was the deal today, but it might be totally different two days from now when we come back to fish.”

Lintner came into the day prepared to cover water with reaction baits, but he switched gears when he found something else that was working. It was a steady bite for him until just after noon. Midday, he went searching for similar areas without success. When he returned to his primary location, he was able to reconnect to fish and caught four in the closing period.

While Lintner ran away with the lead late in the day, Spohrer hung near the top of the leaderboard for most of the day with six bass for 18-11, including a 5-9. The Gonzales, Louisiana, pro may be seen as a local to some; he lives more than four hours away and has no local experience on the fisheries.

“We don’t come up and fish here, and I had to dig hard for every bite like everyone else,” he said. “It’s tough to get a bite here and the only way I could get bit was with a squarebill, fishing it really slow.”

Spohrer’s fishing a new squarebill from Nomad Designs in a crawfish pattern – he’s winding it around cover on 12-pound Seaguar AbrazX on a 6.1:1 Quantum Smoke reel.

“I never use a reel that slow, but I had to force myself to slow down,” he said. “I was getting bites fishing behind other guys, and I think that’s the bait I was using and how slow I was fishing.”

Group A returns to Lake D’Arbonne on Monday, starting at 9 a.m. CST. Watch all three periods on the MLF NOW! live stream beginning at 8:30 a.m CST on Sunday. Watch for FREE on MajorLeagueFishing.com, the MLF app, or the MyOutdoorTV app.