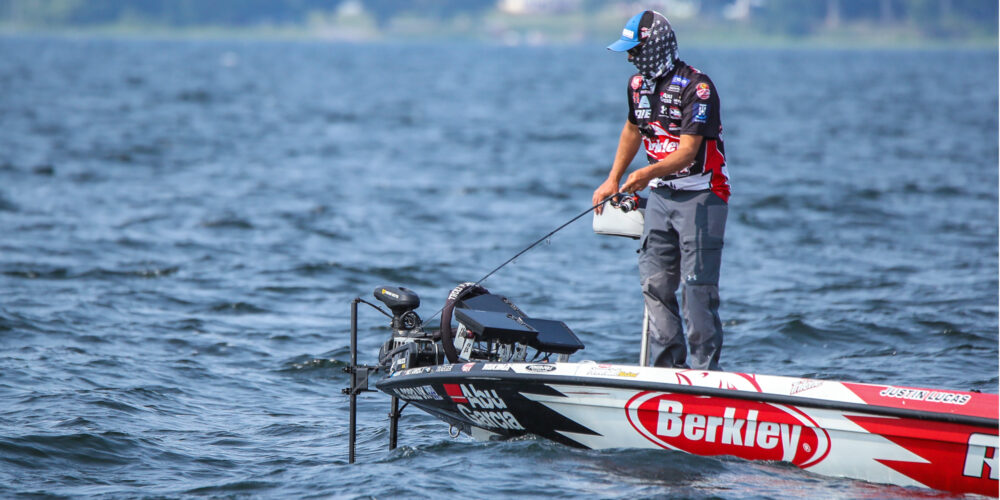 PLATTSBURGH, N.Y. – What a difference a day makes.

As the field of 39 anglers headed out of Plattsburgh City Marina onto a breezey Lake Champlain for Day 2 of the Toyota Stage Six Presented by Googan Baits, Andy Morgan shook his head, nodded toward the bumpy water outside the marina and joked: “Well this should be fun.”

The Lake Champlain of Day 2 was indeed in a slightly different mood than it was 24 hours prior. The glass-flat afternoon that produced over 100 pounds of largemouth for Matt Lee on Day 1 gave way to choppier water and a slightly slower bite on Friday.

Leave it to a deep-water smallmouth sharpie to figure things out the best.

Powered by a string of 4-plus-pound smallmouth that he pulled out of 20 to 30 feet of water on a milk run of spots on the Inland Sea, Justin Lucas stacked 50 pounds, 2 ounces on SCORETRACKER® Friday to finish atop Group B’s first qualifying day on Lake Champlain. Lucas – who racked up two wins late in the 2020 season on deep-water smallmouth fisheries – caught five smallies over 4 pounds, including two during a final-period surge that pushed him past Brandon Coulter, who led most of the day prior.

“Mission accomplished so far,” Lucas said. “Today was a pretty good day, considering I didn’t catch anything in the first hour and a half. We have a lot of work to do to win the (Group B) round, but this is a good start.”

Lucas’ pattern was a near mirror image of his wins on Sturgeon Bay and Lake Erie in 2020. The Berkley pro spent the day drop-shotting a Berkley PowerBait MaxScent Flat Worm on deep rock, gravel and sand, starting his day with a 4-3 and adding 10 fish weighing 3 pounds or better on the day.

“It was just a perfect day to drop-shot deep smallmouth,” Lucas said. “It’s not a secret what I’m doing – Berkley MaxScent Flat Worm on a drop-shot. You just have to put in the time and get out there and do it, but when you hit those windows where they’re biting, you can put some weight on in a hurry.”

Coulter – who won the 2019 Summit Select on Champlain – kept a flippin’ stick in his hand all day long as he worked stretches of shallow hydrilla, milfoil and coontail in St. Alban’s Bay, building a comfortable lead until his bigger fish vacated the area in the final three hours of competition.

“I came out the gate really hot, I’m just having trouble closing it out,” Coulter said. “This is my favorite place in the world to fish, but I had a chance to put some distance on second place and take a pretty good lead (into Group B’s second day). I’m a little frustrated that I didn’t close it out, but how many times can you put a flippin’ stick in your hand and catch fish all day long on a lake like this?”

Numbers and Notes from Day 2

Toyota Stage Six Presented by Googan Baits continues Saturday with Group A’s final qualifying day. Day 1 leader Matt Lee will enter Saturday with a 55-pound cushion in the race for the group’s automatic berth in the Championship Round, thanks to his 103-pound 5-ounce catch-fest on the first day of the tournament.

The weather for Saturday’s competition day calls for an 84-degree high with partly sunny skies and a 40% chance of thunderstorms. Winds are predicted to be 7 to 9 mph.

Saturday’s Group A anglers will carry their weight from Thursday into Saturday; the anglers who finish second through 17th in combined two-day weight will advance to the Knockout Round. The angler with the heaviest two-day total weight will advance straight to the Championship Round.

You can catch all three periods of competition Saturday on the MLF NOW! live stream, starting at 8:45 a.m. ET. Competition begins with lines in at 9 a.m. ET.