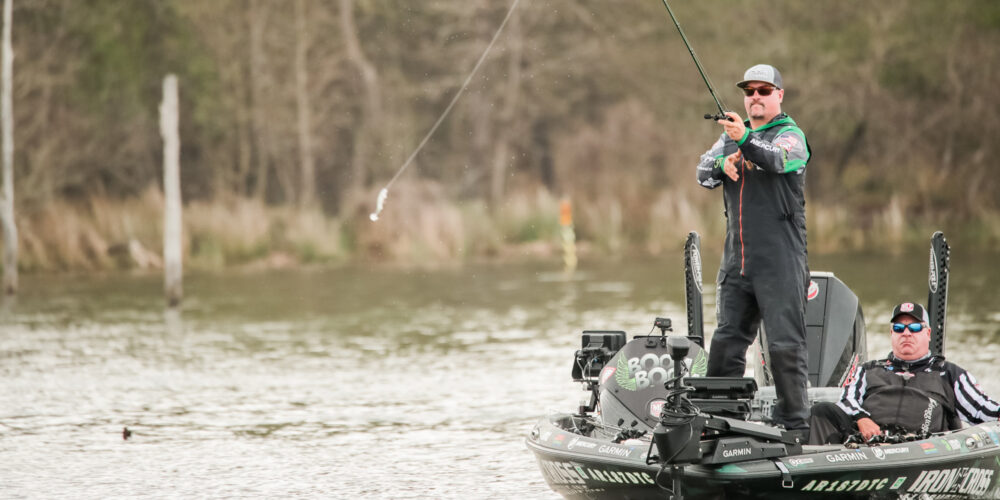 EUFAULA, Ala. – You’ve likely heard the term “practice while I compete.” That’ll never be truer than it will this week on Lake Eufaula.

As the field of 40 studied up Sunday during the lone practice session for REDCREST 2021 Presented by Old Wisconsin Sausage, almost to a man, they flat-out admitted that a traditional “practice” on this 70-mile-long impoundment of the Chattahoochee River was next to impossible. Instead, they scouted the water conditions as best they could in the 12 hours allotted, poked around a few of their favorite waypoints, and prepared to fill in the rest of the details as they compete in the first two qualifying days on Monday and Tuesday.

“This place is so big, it’s impossible to cover everything you want to in one day – you just have to go check on a few of your spots and see if you can expand on those during the tournament,” said Mercury pro Fletcher Shryock. “It’s a little bit of a gamble – you have to hope that you’re on the right stuff early (the first day) so you don’t fall behind right out of the gate.”

In theory, the anglers who did well at the 2020 Bass Pro Tour season opener on Eufaula will start with spots and patterns that brought them success in that event: nine of the Top 10 and 17 of the Top 20 at Stage One last year are competing this week. But what a difference a year makes.

“I’m not super familiar with Eufaula because I’ve only fished here a couple of times, but the water feels low today just because of how high it was last year,” observed Fred Roumbanis as he finished out his last hour of practice. “The water was up, and I fished some things that are out of the water now.”

Eufaula is also still dirty from heavy rains that hit southern Alabama last week, and water is cold: 49 degrees in the morning, warming up to 52 during the day.

“I think these fish are prespawn, but winter/early prespawn,” Roumbanis said. “Even though we were here earlier last year, (prespawn) was further along. There was so much more green than I’m seeing right now. We had a much more mild winter last year. I’d have to say that the vegetation is just a little bit off from last year.”

Roumbanis was one of a handful of anglers who reported mixed success on Sunday, and is strongly of the mindset that most of the field will be in a similar “feeling it out” mode as REDCREST begins on Monday.

“I’ve caught fish out in 15 feet of water and I’ve caught fish shallow, but I don’t feel like I have a LOT of anything,” Roumbanis joked. “There’ll totally be a few guys who are on ‘em right from the start, but I think you’re going to see a lot of guys still running around the first couple of days to dial things in. There are going to be some big fish caught, though, and fishing is going to get better as the week progresses. If a guy can survive the first couple of days, this warming trend could make things happen fast.”

Roumbanis plans to check water temperatures first thing in the morning, and start his gameplan accordingly.

“I’ll probably start off shallow,” he said. “This is typically the kind of condition where you’ll get a good shallow-water reaction bite. You know the fish are coming, it’s just a matter of when.”

Here’s what several other pros had to say about their practice:

Luke Clausen: “It wasn’t too great and there wasn’t much rhyme or reason. I would get a couple of bites and then go hours without getting another bite. I am still not sure what I am going to do and didn’t feel like I really learned anything new today.”

James Elam: “It was tough on me: I boated two bass and had two more bites. One day of practice is hard, and I’ll be practicing again (Monday) and will fish all new stuff. I did write off some water that was too dirty and spent most of my time looking for cleaner water that was a little warmer.”

Josh Bertrand: “It was fair and wasn’t as good as I was expecting. I did a lot of looking, much more than I usually do in practice since we only had one day. I burned a lot of gas and didn’t do as much fishing as I normally do in practice. This is a big lake to figure out in just one day.”

Bradley Roy: “It seemed like the day went by really fast. It was tough fishing and similar to the conditions we had last year. The bites are few and far between, but it is a good fish when you get one. I think the fishing is going to get better and better each day as it warms up some.