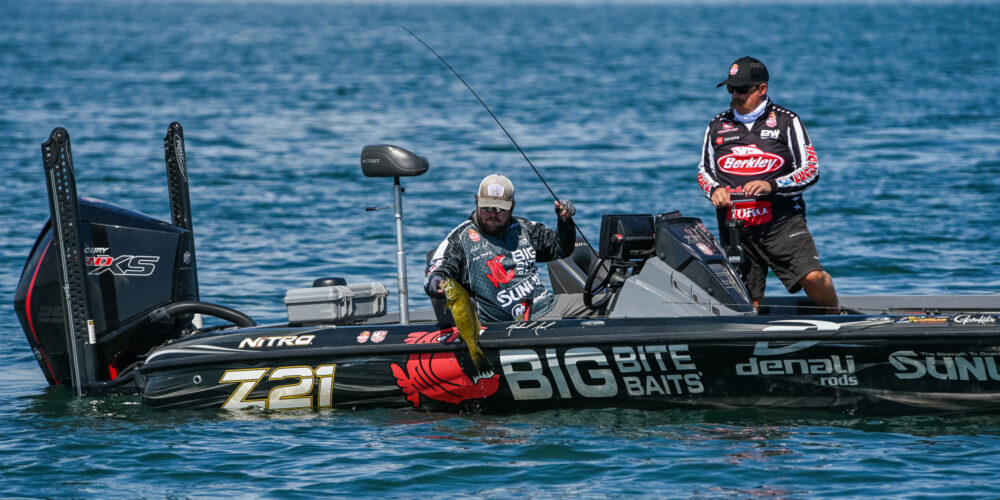 ST. CLAIR SHORES, Mich. – The kickoff to the CarParts.com Stage Seven Presented by Covercraft was contested under ideal conditions for the big waters of Lake St. Clair, Lake Erie, the Detroit River and the St. Clair River.

Sunny skies and a light chop made it possible for the 40 anglers in Group A to fish wherever they pleased, and they certainly took advantage of it.

Leading up to the event, many predicted excellent fishing, but it may have been even better than expected. In addition to big smallmouth, plenty of healthy largemouth made an appearance and three anglers surpassed the 100-pound mark for the day, with one more angler getting within a scorable bass of that mark.

On a day with a strong morning and afternoon bite, there was constant movement on SCORETRACKER® with anglers shuffling positions in the standings all day long, depending on who got hot or cold.

Bryan Thrift took control early and led for much of the day before being overtaken by Russ Lane in Period 3. They both had excellent days, finishing fourth and second respectively, but the No. 1 spot at the end of the day belonged to Michael Neal, who tallied 36 bass for 120 pounds, 13 ounces to lead Lane by 18-9 going into their next day of fishing on Sunday.

While Thrift and Lane stood atop the standings for much of the day, it was Michael Neal who made the loudest statement late in the day. His stout final two periods gave him the lead in what has already been an incredible season for the Tennessee pro.

The recently crowned Tackle Warehouse Pro Circuit Angler of the Year has been close to winning so many times over his career and put himself in a great position to make it happen in Michigan if the conditions allow it.

“It’s going to be interesting to see if I can even get back out here again and fish if the wind blows like it’s supposed to,” Neal said. “If it blows too much out of the south, I won’t even be able to fish it. I’m going to spend tomorrow looking for a longer shaft trolling motor and try to get that installed since I have a good shot of winning my round and going straight to the Championship Round.”

Neal did most of his damage in the second and third periods. After the first break, he totaled seven bass for 18-14 and was over 30 pounds behind Jacob Wheeler, more than 40 pounds behind Lane, and more than 50 pounds back from the leader, Bryan Thrift.

He did his work with a mix of reaction baits and finesse rigs and slowly climbed up the standings on the way to a dominant finish for the day.

“I caught some dragging, some winding, and everywhere in between,” Neal said.

Neal described his primary area as a flat with irregularities, and he discovered it in practice but didn’t know its true potential.

“I had a few bites there in practice but didn’t realize what I found; it’s loaded with fish,” he said. “It’s a grass flat with some high spots and rocks mixed in. I’m all in on this area and hope the wind that’s coming doesn’t move them too far away from it. But, regardless of what happens, it was a really fun day today.”

The 100-pound mark is a goal for all anglers and is now a benchmark for the MLF format for single-day excellence.

Cracking the century mark for the first time in his career was Russ Lane, who sat just shy of the mark until landing a 2-8 with 15 minutes to go.

“I really wanted to get 100, just because I’ve never done it,” Lane said on MLF NOW!

Wheeler is no stranger to 100-pound days, but this one may have been his most important as he tries for his third consecutive win and attempts to overtake Ott DeFoe in the points race to earn the Angler of the Year title.

“I was able to stay on them all day long, and 100-pounds is a solid day, but there’s a lot of work ahead of us,” he said. “I feel good about the day because it gives us a chance to win the round and advance right to the Championship Round.”

Regarding the AOY race, Wheeler did his part Friday to give himself a shot and will likely be watching SCORETRACKER® to see how DeFoe fares on Saturday, as he led Wheeler by 12 points coming into the event.

Thirty-nine anglers from Group B will get their first chance at Lake St. Clair and connected waters Saturday. They’ll see a much different fishery than Group A as the weather is forecasted to be much windier, with gusts approaching 30 mph. As a result, MLF’s trailering policy will be in effect, allowing anglers to launch their boats anywhere within the tournament boundaries.