PATTERN INSIDE THE PATTERN: Lane’s REDCREST Win Came Down to Late-Afternoon Bait Change 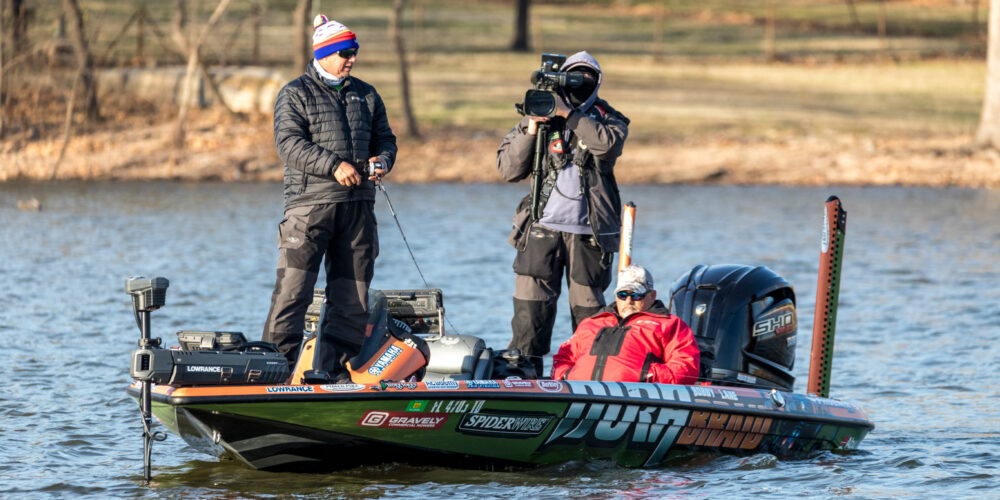 Bobby Lane had arguably the greatest come-from-behind victory ever witnessed at a professional fishing championship. His third-period comeback during REDCREST 2022 Presented by Costa on Grand Lake O’ the Cherokees was loaded with dramatic fish catches, and it will go down as one for the ages.

What viewers of MLFNOW! saw on Championship Sunday was Lane using a very basic approach of alternating between a crankbait and flipping. On the surface, it was a simple pattern. How Lane put all the puzzle pieces together, however, was far from simple.

In the day and age of anglers dominating tournaments with electronics, Lane used some old-school outdoorman’s wisdom and followed his gut to become the 2022 REDCREST champion.

Before Lane ever hit the water for practice, he had a good idea how he might be able to fish for Grand Lake’s bass.

“My son Bobby Lane III and I were driving to Grand Lake, and on the way there from Florida, I paid attention to the trees,” Lane said. “I noticed some of the trees like the dogwoods have ‘buddies’ on them – my brothers and I call the buds ‘buddies’. That means spring isn’t far away. If there were no buds, fishing would likely be offshore with jerkbaits or other deeper techniques. But the buddies tell me that it’s been warm enough that the bass will be coming out of the winter pattern, likely on the move toward shallower cover.”

Day 1 practice conditions took Lane by surprise, though. The weather was pleasant enough, but the water temperatures were perplexing.

“On the first day of practice I wore shorts and a dri-fit shirt,” Lane said. “Air temperatures were at 75 that day. The crazy thing was the water temperature though; it was only 46 degrees. I fished Duck Creek, Honey Creek, pretty much every creek, and didn’t catch a fish until noon. I learned that the fish weren’t out on the main lake rip rap, or on the bridges. I had to fish behind those areas, heading into the creeks. Even with the colder water temperatures, I managed to catch 7 or 8 3- to-3 1/2-pounders. It was a good practice day.”

On the second day of practice, Lane solidified what he thought could be his winning pattern for the REDCREST championship.

“For me, the second day started and ended the same way,” Lane said. “I was the first at the ramp, and the last to leave. We dealt with heavy wind and an amazing amount of rain. I went to Horse and Duck creeks, then a little more upriver toward Honey creek. I caught some 5-pounders, some 4s and some 3s.”

In his words, Lane “put a beating on them” cranking a Berkley Frittside 5 in HD brown shallow. The fish seemed to be stable, so Lane was all in on the shallow-cranking bite.

On Day 1 of the tournament, Lane was met with terrible fishing conditions and a crowd of competitors in his main areas. Not an ideal start to his plans.

“I started the tournament back in Duck Creek, and so did Elam, Strader, Cox, and Chapman,” Lane said. “Plus, the water was puke brown. I caught one off the bat, but I couldn’t get really on them there, so I ventured over to Drowning Creek and caught a 5 and a 4. That took me from 21st to eighth or ninth place. I started catching them in many of the places I practiced. The Frittside in the shallows was working. It was a perfect day: I burned 35 gallons of gas and was in sixth after Day 1.”

Lane believe that his pattern would continue to hold heading into Day 2.

“I just needed to be in the Top 20, so based on the cutline, I figured I needed two or three scorable fish to make it,” Lane said. “I started in Drowning Creek and caught nothing. I kept running and caught nothing, and noticed that the water got really dirty and was rising. The lake came up over 3 feet in a couple of days, but I made it to the Knockout Round in Group B. I needed the day off after that.”

Lane’s Knockout Round provided the results that boosted his confidence even further in his shallow cranking pattern.

“During the Knockout Round, everything seemed to work out,” Lane said. “I went to Woodward and fished further back in a pocket and caught a scorable. I ran to all of my areas and caught fish. At the beginning of the third period, I caught back-to-back scorables and took the lead. I knew (the cut line) was well behind me. I felt good and just went fishing to prepare for the Championship Round.”

The “Decoy” Wins the Day

Lane was committed to cranking the Frittside for his shot at the REDCREST trophy on the final day. He went as far as prepping three rods Frittsides and three decoy rods – a very old-school move, to not tip his hand. Ironically, a “decoy” ended up winning the day.

Lane ran straight to Drowning Creek (“It was the only place I felt I could win the tournament,” he admitted) and caught a 3-pounder right off the bat before adding one more fish in the first period. But the bite faded dramatically in the second period and Lane gradually sank lower and lower on SCORETRACKER® until he was 11 pounds out of first place when the final period started.

“I headed back to Drowning Creek at the end of the second period and picked up my jig and flipped into a tree – I was still optimistic,” Lane said. “I just knew I had to change, the crankbait stopped working.”

The third period seemed as though Lane received divine intervention from the bassin’ gods. He abandoned the method that had produced almost all of his fish in the tournament to that point and moved even shallower. Out went the cranking rods, in came one of the “decoy” baits, a ½-ounce jig with a green Berkley Powerbait Meaty Chunk with chartreuse dye on the tips of the trailer.

“I decided to commit to shallow stuff with the jig in the third period,” Lane said. “Something was telling me to go further back into the pocket.”

Lane pulled a 3-plus-pounder off of a shallow log, and then hooked a 6-pounder that he battled over rusty dock cables to get to the boat.

“I think 99% of the time you lose that fish, but it was meant to be,” Lane said. “The pieces of the puzzle came together. I committed to shallow docks in the final period, it was the only thing left that I knew to do.”

Lane’s instincts and tournament experience eventually afforded him one final shot to close the door and become the champ. With just minutes left in the final period, Lane pitched his jig to an isolated piece of brush near a dock and connected with the 2-pound largemouth that would prove to be the REDCREST winner and difference-maker.

“I can’t believe I won in the end with a jig, I caught 99% of my fish on the Frittside,” Lane said. “This win is as big as it gets, I guess it was just meant to be. The Lord really blessed me.”