Scroggins On a Mission to Rally into REDCREST 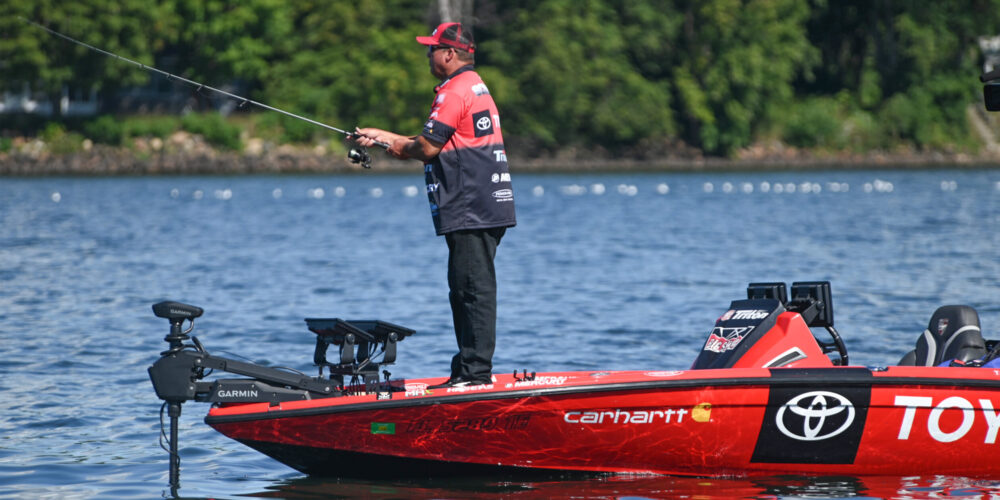 ONAMIA, Minn. – Mille Lacs Lake may be the fishery where Bally Bet Stage Seven Presented by Minn Kota is being contested this week, but anglers anywhere near the REDCREST IV qualification line are quick to admit the Bass Pro Tour Championship is the tournament consuming their minds here in Minnesota. Terry “Big Show” Scroggins is one of them.

Big Show came into Stage Seven 36th in Bally Bet Angler of the Year points, a few spots on the right side of the REDCREST qualification line. Riding the momentum of a top-five finish at Cayuga in Stage Six, Scroggins is poised to make his first REDCREST and would love nothing more than to roll into North Carolina as a competitor next March.

“It was a 26-hour drive in the Tundra from my house to Mille Lacs, so I had plenty of time to think about just how bad I want to qualify for REDCREST,” Scroggins said with a smile. “You run all these numbers and try to do the math, but at the end of the day, all I can control is my time on the water. I needed to come here and make Wednesday’s Knockout Round. If I do that, I’ve done my job.”

The Team Toyota pro is competing in Group B this week and started his first period red hot on Sunday, before having the smallmouth he found in practice all but vanish on him for the remainder of the day. After an up-and-down day, Scroggins ultimately ended Group B’s Qualifying Day 1 sitting in 17th place. Theoretically, Big Show just needs to finish better than 20th place by the end of the day today. So, he’s right where he needs to be.

“These smallmouth move so much based on the weather conditions and time of day,” Scroggins explained. “In practice, we had lots of clouds and strong winds, then yesterday (Sunday) it was sunny and flat calm. It’s the same deal as thinking about the points… the more you rack your brain on where they went and how to outsmart them, the worse off you are.

“I landed on them in the morning, and it was fun while it lasted! After my initial flurry, I pretty much went all day until towards the end of the third period without a scoreable bass. But I’m glad to have the ones I did catch and feel pretty good about being able to stay consistent tomorrow (Tuesday). One day at a time.”

Scroggins isn’t one to give excuses or dwell on the negative, but his last few seasons have been plagued with health issues. Between major surgeries, recovering from those operations, and dealing with the usual ailments full-time anglers navigate he’s, had a constant hill to climb. Thankfully, Big Show has been able to stay healthy in 2022. He’s down 30-plus pounds since the start of the year; he’s feeling good and fishing well.

Ask anyone on the Bass Pro Tour and they’ll tell you Scroggins is the kind of guy you want to have around whether you’re in a pinch and need help, or you want to throw some meat on the grill and relax. It’s not out of the ordinary to find him in a parking lot past dark lending a helping hand to a competitor with mechanical issues or dropping off pizzas he bought to treat the behind-the-scenes heroes of professional fishing – the service crew. Big Show is simply a good dude.

But for better or worse, the fish don’t know that, and they don’t care. They aren’t bothered with the dreams, livelihoods, and personal lives of professional anglers or anyone who fishes for them. It’s all up to the person holding the fishing rod. On Tuesday, it’ll all be on Big Show to finish high enough for a ticket to his first REDCREST and put the finishing touches on a solid yearlong effort.

Tune into MLF NOW! all day today to see how it shakes out.