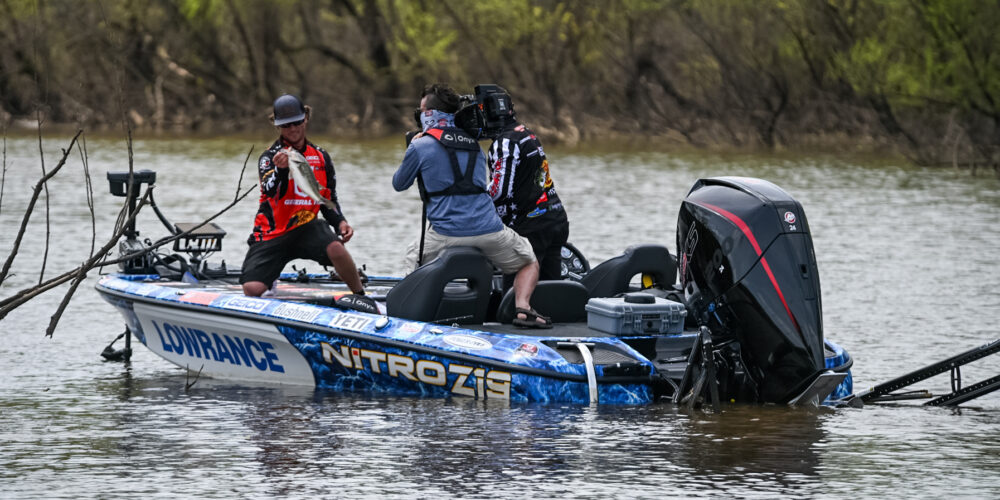 RALEIGH, N.C. – If you were looking for action, drama and giant Carolina bass, Group A delivered all of that on the third day of competition at General Tire Heavy Hitters Presented by Bass Pro Shops on Jordan Lake: Toro Cut Line drama, big-bass battles for $25,000, Dean Rojas undergoing lakeside triage on his right hand in Period 3, and one angler securing himself a position in the Championship Round.

But the story of the day and the majority of the praise belongs to Fletcher Shryock, the angler who takes home the Berkley Big Bass of Group A and an automatic trip to the Championship Round.

Shryock Bags Big Bass and Berth in Championship Round

Shryock not only secured $25,000, but also locked in a place in the Championship Round where he will have a guaranteed chance at another $200,000. Shryock landed 14 bass for 60 pounds, 8 ounces on Sunday, bringing his two-day total weight to 88-13, 12-8 ahead of second-place Zack Birge.

While his day looks impressive in the end, Shryock began his day just focused on making the cut as he sat in 11th place as the day began.

“Really, all my focus was on making the cut,” Shryock said. “I was nervous because I was sharing water with some other guys on Day 1, but no one was around me to start the morning today. I decided to keep that area all to myself and not move all day. It paid off big time.”

The Alabama angler had a very productive morning and early afternoon targeting buckbrush with a Gary Yamamoto Fat Ika in green pumpkin and a ¼-ounce weight. Quickly, Shryock was above the Toro Cut Line and looking to add some cushion. He got it when a 9-4 toad took his bait.

The day began with Anthony Gagliardi leading in the race for the big bass of Group A thanks to his 7-15 he caught on Day 1 of competition. Adrian Avena quickly changed that with his 8-9 to gain the lead in the race for $25,000. His lead only lasted for a little over three hours, as Dean Rojas jumped ahead by 2 ounces after catching an 8-11.

But they were all left behind once Fletcher Shryock found his Tarheel State tank.

“I found a willow in some deep water that stuck out further than everything around it,” Shryock recapped. “She was set up right beside it, so I flipped in there and she took it immediately. I knew it was the big bass of the day when I saw her. I just had no idea how close she got me to the top of SCORETRACKER®, so it kind of changed my strategy to go for the lead.”

Shryock was shocked to learn from his MLF official after scoring that 9-4 that he was closing in on leader Zack Birge by a matter of pounds.

“I went from fighting for a spot in the top 10 to second place with one fish and I couldn’t believe it,” Shryock said. “I stayed aggressive, found a 4-, 5- and 6-pounder in the final period and was able to come out on top. I had so much fun today and I can’t wait for Wednesday.”

The Favorite Fishing pro now takes his $25,000 straight to the Championship Round where he will fish Shearon Harris Reservoir. Shryock admits that he didn’t have the best practice there this week, but feels confident in his ability to find the fish.

“I’m guaranteed at least $35,000 this week because 10th place earns $10,000 in Heavy Hitters, so I feel pretty good right now,” Shryock said. “While it was tough on me in practice, I think if I go out there with a clear head, continue to make the right decisions and continue to have fun, I’ll put myself in a good position to win.”

While Shryock is straight onto the Championship Round, nine other anglers are moving on to the Knockout Round on Shearon Harris on Tuesday. Those anglers are:

Group B returns to Falls Lake tomorrow for their second and final qualifying round. Only the top 10 pros at the end of three periods will advance to the Knockout Round. The angler with the most weight on SCORETRACKER® at the end of the day will earn an automatic berth in the Championship Round on Shearon Harris Reservoir. The angler with the biggest bass in Group B will earn a $25,000 check. Brandon Coulter currently holds the big bass lead with a 6-14.

Watch all three periods of Group B’s Qualifying Day 2 during the MLF NOW! live stream beginning at 7:15 a.m EST on Saturday. Watch for FREE on MajorLeagueFishing.com, the MLF app, or the MyOutdoorTV app.