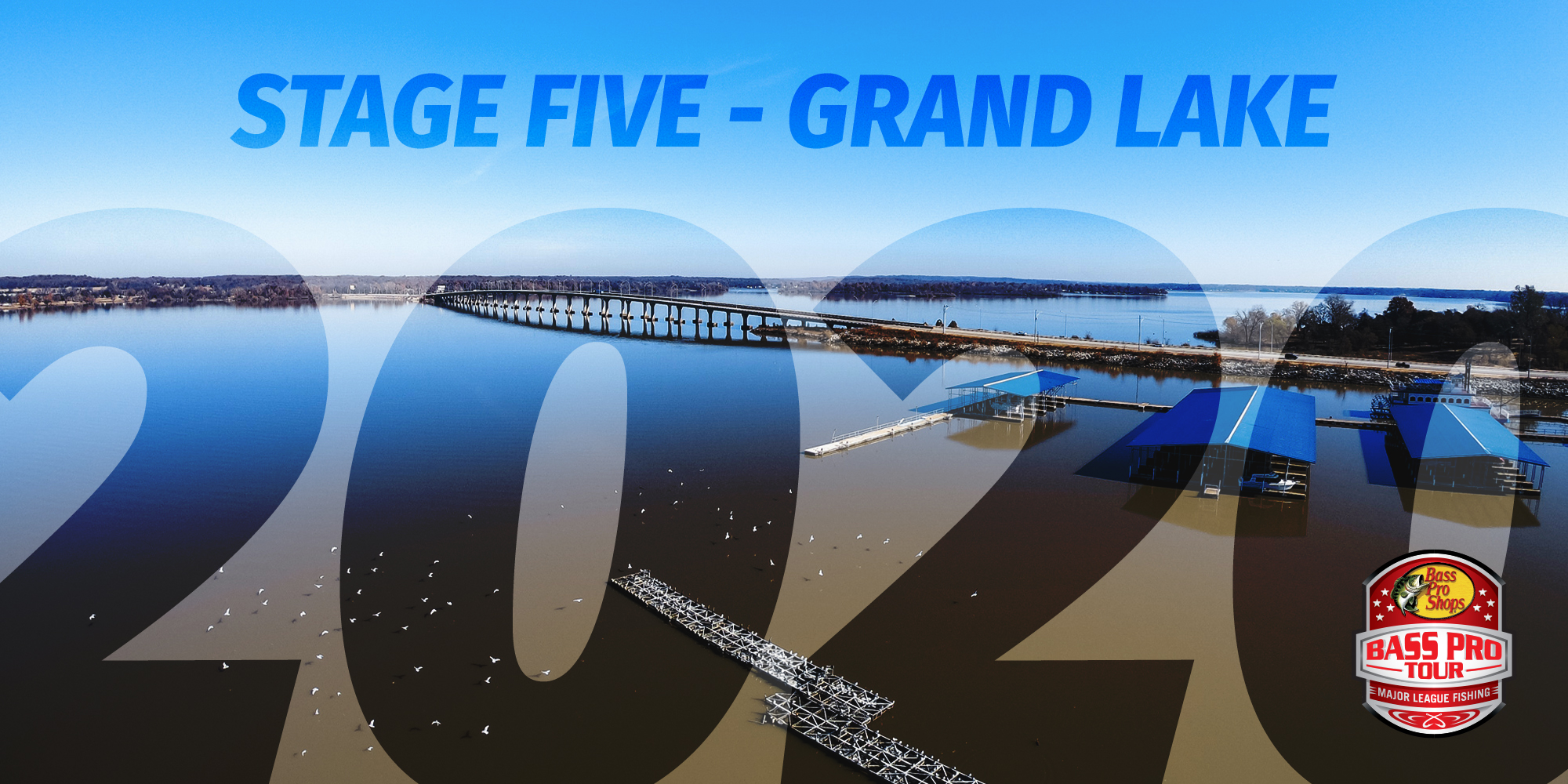 With the addition of the Heavy Hitters event, Stage Five of the Bass Pro Tour has been moved to Grand Lake in Grove, OK and is now set for April 24-29, 2020.

GROVE, Ok.  – During the inaugural season of the Bass Pro Tour, the 80-man field was fully prepared to fish Grand Lake O’ the Cherokees for Stage Seven at the end of May. However, due to historic flooding in northeastern Oklahoma, Stage Seven was moved from Grand Lake to Table Rock Lake.

While many anglers were disappointed that they couldn’t fish Grand Lake in 2019, the excitement for a return in 2020 has a couple of Oklahoma pros ready to go.

James Elam and Jason Christie have years of experience on Grand Lake and know just how great the Sooner State reservoir can be. Christie won an FLW Tour event on Grand Lake in 2013, to add to an impressive run of five BFL wins there. Elam says he has been fishing on Grand Lake since he was 9 or 10 years old and regularly visits his dad, who lives on the lake.

The two pros are extremely familar with Grand Lake, and what it takes to win there.

“Grand Lake has had a couple of down years and it’s starting to come back really strong,” Elam said. “The lake is fished a lot and is highly pressured throughout the year, but I think those floods from last year are really going to help it recover. For that reason, we should have a pretty good time there come April.”

“A lot of the big tournaments that have been there in recent years have been in February and March, when it’s tough to get bit,” Christie said of the timing of Stage Five. “For us to go there around the spawn is really exciting because it gives us a better chance to really get after them.”

A Year Off Helped in a Big Way

Both Elam and Christie point out that there are bass tournament on Grand Lake most weekends of the year. But tournament cancellations and rescheduling due to the flooding gave the lake a much-needed break during a key point in the fishing season. Elam says that the time off is going to benefit the fish population as a whole.

“Those floods probably helped a lot of the smaller bass in the lake find better places to hide, feed and grow up,” Elam explained. “With all of those extra little hiding places, a lot of the smaller bass could grow without the threat of getting eaten by larger fish, and that’s going to help tremendously. You’ll see 1- and 2-pounders grow into 3-, 4-, and 5-pounders before too long.”

Christie agrees with Elam that Grand Lake’s largemouth are indeed growing, but the flooding is only part of the reason. The Mercury pro says that the abundance of baitfish always surprises him when fishing Grand Lake, and it gives the fish plenty of opportunities to fatten up.

“It doesn’t matter if it’s January, June or December, you’re going to be around a bunch of shad,” Christie said. “Those shad are what have kept the lake in such a good position despite the pressure it’s received over the years. Those fish aren’t going hungry.”

Grand Lake offers numerous boat docks, laydowns and an abundance of rock in terms of structure and cover. However, the 46,500-acre impoundment fishes more like three different lakes, and Christie says that Stage Five might be more about where you fish than how you fish.

“It’s really like three different lakes combined into one,” Christie confirmed. “The lower end of the lake is pretty deep with clearer water than the rest of the lake, and it kind of resembles Table Rock Lake down there. The mid-lake area is a lot flatter and has semi-dirty water. The upper end is really like you’re fishing a river like a Kentucky Lake.”

Elam predicts that the water level and color will be deciding factors on how he makes his game plan for Grand Lake come April.

“Water level is the most important thing for me, but water color will also play a factor,” Elam said. “The fish should be in kind of a transition from spawning to summertime, so it might really be a junk fishing tournament. I may use a lot of different baits just to try and figure out a pattern of how the fish are acting.”

Throughout their collective years of experience on Grand Lake, neither Elam nor Christie have ever fished the catch-weigh-immediate release format on the reservoir. The two pros have conflicting thoughts on what it will take to win when it comes down to it.

“I think we’ll all be able to pattern them while we’re there, and I think the way to win may be to get the most bites,” Elam projected. “Staying efficient and effective throughout the day could be the key to success. There will be plenty of 2-pounders caught, but a lot of guys will be finding 3-, 4-, and 5-pounders as well.”

“In my experience, Grand Lake isn’t a lake that you’ll be able to go out and catch 25 or 30 fish in a day,” Christie countered. “You may only catch 10 or 15 in a day, but the good thing is that a good amount of them may be big ones. A lot of the fish should be up shallow, so they should be pretty easy to catch. I’m really glad we’re getting to go out there.”