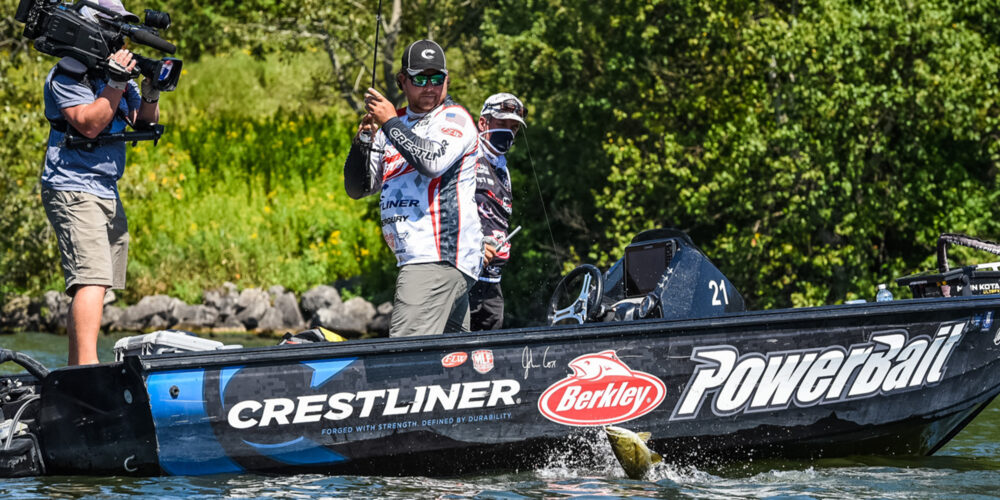 John Cox is gearing up for a full 2021 season of fishing both the Bass Pro Tour and Pro Circuit. Photo by Charles Waldorf
December 21, 2020 • Dave Landahl • Bass Pro Tour

John Cox is the newest addition to the MLF Bass Pro Tour roster, but the Florida pro isn’t just onboard to fish the grueling Bass Pro Tour format. No sir, the 2017 Forrest Wood Cup champion is one of 20 anglers who have opted to fish the Pro Circuit as well.

“It’s exhausting fishing so many events,” Cox admits. “I can probably go hard fishing both the Tour and Circuit for five more years or so. I want to fish hard and have as many opportunities to fish for a six-figure check as often as I can. With championships and hopefully qualifying for Heavy Hitters, I believe that would give me around 17 major events to fish in a year. Just winning one event sets up your year, and cashing a lot of checks is pretty fun.”

Adjusting to the Workload Accordingly

As the “Tin Man” has proven in his career, Cox is also somewhat the “Ironman” of physically demanding tour schedules (example: his performance in the 2020 Pro Circuit TITLE on no practice and very little sleep).

With so many events to fish in a calendar year, Cox adjusts his practice to keep as fresh as possible at each stop.

“With back-to-back tournaments, I actually don’t stress out as much as you’d think,” Cox says. “I did earlier in my career, but I fished two circuits last year, and now that I’m fishing the MLF format on the Bass Pro Tour, I’ll have limited practice days.”

But contrary to the thought that more practice equals better tournament finishes, Cox doesn’t mind a break from practice.

“I actually find limited practice is really beneficial,” he says. “You can easily burn out in practice. I remember years ago fishing some FLW tournaments and you’d practice an entire week before the event. Some guys would be there for weeks. I don’t think that’s very productive for the tournament you’re going to fish, since weather changes and fish move.

“Now, what it did on the positive side was make me very comfortable moving around on a lot of different bodies of water. But as far as the tournament at hand, it wasn’t helpful. I prefer try to stay as fresh as I can.”

Cox finds fishing tournaments in such a tight cluster can actually improve his fishing game as the season progresses.

“Last year, I think I had six tournaments in a row – smallmouth events, I’m not a smallmouth expert by any means,” Cox says. “I bombed two of them, then I started to get dialed in. By the Pro Circuit TITLE event, I was in a good zone fishing for smallmouth on Sturgeon Bay. It’s exciting fishing one tournament after the other, but I definitely feel like that helped me get better at understanding how to fish for smallmouth.”

Preparing for the Grind

Like many professional anglers and athletes, Cox has an increased focus on his health during the offseason to keep him going through a demanding tournament schedule.

“During the offseason, I sleep more, eat better, and exercise – which I hate but have to do now as I’m getting older,” Cox says. “I also use to fly a lot, and got sick a lot – obviously, I changed that this past year, and I felt a lot better physically. When you’re worn down, you overlook things. You make mistakes. Crazy things, trolling past an obvious spot, miss the perfect winning area. It’s so easy to miss things when you’re not mentally and physically sharp.

“I’m going to try to change my diet a bit during the season as well. Because I’ve basically been drinking energy drinks and hardly eating during the tournaments, and that’s bad for you. Then maybe take Nyquil to go to sleep at night because you’re all jacked up. It’s terrible, you end up feeling like you’re going to die at the end of the season.”

Getting Ready for a New Format

The upcoming Bass Pro Tour will mark the first time Cox will fish a full season using the MLF format. After getting to sample what it’s like in 2020 at the TITLE event, he can’t wait to get more.

“One of the things that excites me most about the MLF format is having two days to catch them,” Cox said. “I can bomb on the first day, but figure it out and still be in it and make the cut. The MLF format made me fish a little different in that Sturgeon Bay event, and I’m excited about it. I’ve always fished for bigger fish, where I can take my time and figure out how to find five good fish by looking for just one fish at a time.

“But in the MLF format, I can’t take a break or I’ll get run over, it’s so intense. The pressure that’s on you is like nothing I’ve ever experienced previously. I spun out a bit during the Knockout Round with the SCORETRACKER®, but I plan on playing it to my advantage in 2021.

It’s all a task that Cox looks forward to tackling.

“(I jumped on it) when I was given the chance to come and fish the Bass Pro Tour, after getting a taste of it at the TITLE event,” Cox says. “I’m super impressed with how professional the organization is, and with the quality of the people involved. It’s all top-notch and run like a professional sport. I can’t wait for the season to start. My main goal for my 2021 season is pretty simple: to make it out alive.”